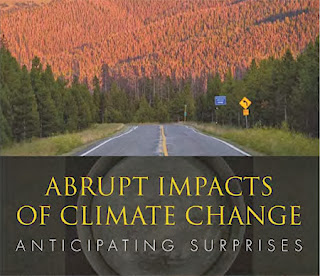 The U.S. National Research Council has released a 200-page report warning that climate change is coming on much faster than we appreciate and that we have to prepare for 'abrupt consequences' arriving within years, decades at the outside.

The report, "Abrupt Impacts of Climate Change, Anticipating Surprises," is available at no charge  online here.  Printed copies are $57.

The report says abrupt changes like melting ice in the Arctic Ocean and mass species extinctions have already started and are worse than predicted. It says thousands of species are changing their ranges, seasonal patterns or in some cases are going extinct because of human-caused climate change. Species in danger include some coral; pika, a rabbitlike creature; the Hawaiian silversword plant and polar bears.

"You can't see it coming, so you can't prepare for it. The faster it is, the less you see it coming, the more it costs," Alley told The Associated Press. "If you see the drunk driver coming, you can get out of the way."

The photograph, by the way, is a now familiar sight to most British Columbians.  It reveals the vast swathes of forest being killed off by Mountain Pine and Lodgepole Pine Beetle infestations that have ravaged the province because we no longer get enough sufficiently cold winter days needed to suppress the parasites' numbers.   What you see in this photograph is exactly what it looks like.
Posted by The Mound of Sound at 2:48 PM

In the 1980's, a person named Hamaker was circulating a paper called "So you want an ice age" or some title like that.

His theory (from memory) was that glaciation was rapid, based on depleted soils and other factors.

Perhaps that paper should be resurrected and studied.

We seem to have begun with the assumption that, because major climate change takes the form of epoch of many thousands of years, that the change itself must occur over several centuries. Lately research has come to see change as something that can be, but isn't always, ushered in remarkably quickly. The Halocene, now being displaced by the Anthropocene, brought us a stable climate for almost 12,000 years, conditions ideal for the establishment of civilization.

Today I was polled by Environics regarding my attitudes on climate change, on my recycling habits, and a few questions about my politics.

The mere fact that some vested interest is still plumbing the depths of climate change skepticism tells me that we will never turn this around.

Major climate change is inevitable, the best we can do is think of ways to adapt to it. Stopping or turning it around is no longer an option. Perhaps we could slow the pace of change a little if we all make drastic changes, and make them immediately. However with millions of people still saying there is nothing to worry about, well it isn't going to happen.

Besides we are Canada, among the world's most notorious and irresponsible polluters.

Hi, Elliott. Remember that there are indeed 'vested interests' working very hard indeed to achieve an maximal degree of skepticism and dissent. They're called fossil fuelers and they're willing to spend big to manufacture consent for their bid to ship dilbit to Asia.

apparently the west coast is going to be wiped out abrubtly by japan's nuclear reactors with the advent of earthquake. Climate change will seem like a party once that happens:(

It seems those warnings were alarmist, Deb. Assuming the Japanese government is successful in safely removing the online and 'spent' fuel rods we shouldn't have any huge problem over here.