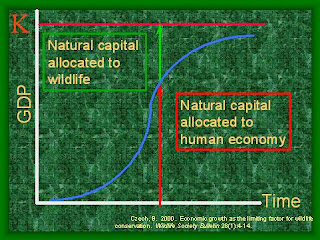 She's the Chief Executive of a mid-sized British investment trust and obviously still believes in the myth of sustainable growth but Katherine Garret-Cox has written an interesting commentary of economic growth and natural capital published in The Guardian.

As the global economy shows signs of coming out of recession, it must be encouraged to do so on a sustainable path, rather than simply storing up problems for the future. If our expansion over the next five to 10 years exploits and erodes our natural capital without any regard to its ability to recover, we run the risk of degradation of local, regional or even global ecosystems and potential economic collapse.

Leading investment economists were asked recently about the value derived from ecosystem services and how they have built this into their forecasts – the responses were illuminating. Some said the subject is too big to meaningfully contemplate, others acknowledged it as a problem but were unwilling to think about it.

What Garret-Cox suggests, obliquely, is that investment economists, like all adherents of neoclassical economics, have become detached from reality.   To them, natural capital is an 'externality' that exists outside their frame of reference.   More honestly, they exclude it because it completely undermines their assumptions of perpetual growth.  To them the economy operates independent of the environment, the biosphere, not as a subset of it.   They cannot accept that the economy cannot grow larger than the world and its resources.   Most of our political leadership adheres to their conventional view.

Pricing natural capital is a fundamental cornerstone to the implementation of steady state or Full Earth economics.   Garret-Cox is on the right track.  She just doesn't go nearly far enough.
Posted by The Mound of Sound at 12:03 PM

Do we destroy capitalism or shall we wait until it collapses in on itself? Icarus had a choice. He didn't have to fly so close to the sun. Capitalism resembles Icarus without the choice. Its dependence on constant (and compounded) growth compels it to fly ever closer to the sun.

Even Adam Smith foresaw the limit of growth capitalism and predicted it must run its course in just 200-years after which we would move to something remarkably akin to steady state economics.

What Smith failed to foresee was a world population that would expand from one billion at the outset of those two centuries of growth to exceed seven billion at the end.