Why Canadians Need to Lead the Road to a New Order

Every day more of us are realizing that growth-based capitalism and neoclassical economics have failed.  Adam Smith gave the growth paradigm two hundred years and he was right.  Mankind has reached the limits of growth.  We're exhausting our farmland, we're devastating our great forests, we're collapsing our global fisheries and we're draining our life-sustaining aquifers.

Today "more" means finding a way that sees someone else have "less."  This takes many forms.  Reagan ushered in an era of perversion that saw wealth transferred out of the blue and white collar middle class to accrue, unearned, to the upper class.  The markets didn't do that, it wasn't merit based, it was the product of legislation that endowed the select few with subsidies, deferrals, grants and tax relief that represented vast fortunes transferred from the middle class to the wealthiest of the wealthy.  Meanwhile working class citizens saw their wages stagnate, or worse, despite substantial increases in their productivity - another benefit that transferred wealth to the privileged.   More, for a few, meant a great deal less for the many.  Not only was their wealth transferred away from them but, with it, went much of their political power and influence.

Academics like Jared Diamond and others reveal that when societies fail, it tends to happen when they're at their zenith and it comes on fast.  It's as though they implode.  One reason for that violent collapse is that societies, as they grow find future growth ever more difficult.  In order to grow ever larger, resort must be had eventually to conjuring tricks, sleight of hand.

We've grown our population threefold since the end of WWII.  We have trebled our numbers in the span of less than one lifetime.  The enormity of that single fact is almost too much to contemplate for most people and so we go on planning for a better tomorrow by ignoring it.  We have to treat our overpopulation problem as what neoclassical economists call an "externality".  You simply don't factor it into the equation.  We do that because we can get away with it, for a little while longer.

Around the world, from Lake Mead and the once mighty Colorado River, to the Middle East and Asia, to large regions of Africa, our freshwater resources are in distress.  We have grown mankind's numbers so massively by turbo-charging our agricultural output through intensive use of fertilizers and groundwater.  It's all been done by sleight of hand.  Now, in many places, over-exploited groundwater resources are nearing depletion.   In some of India's prime agricultural regions they're running out of groundwater even as they find they have so exhausted the soil from overproduction that they now require twice as much fertilizer to obtain a decent crop.  It's a race to the bottom, the precursor to societal collapse.

One of the world's leading NGOs, the Global Footprint Network, analyzes man's consumption of biomass in relation to the Earth's capacity to renew it.  It looks at our ecological footprint, not just our carbon footprint, in terms of whether we can be said to be living sustainably, within the limits of our planet's abilities to support us.   As you might have guessed, the answer is resoundingly "no."

Biomass includes everything we eat. It is what we wear.  It is the wood we use to build our homes and heat our stoves. It is the stuff from which we produce ethanol and bio-diesel.  In its ancient form it is our fossil fuels.   It is also how we cleanse our air, our water and even our soil of man-made pollution.

How do we consume more renewable resources than the Earth can produce?  We go to extreme lengths to do it.  We deplete our freshwater aquifers, pumping them dry.  We pursue and collapse, one global fishery after another, emptying the oceans.  We deforest faster than we or nature can reforest.   We over-exploit our farmland with excessive irrigation and fertilization, in effect poisoning it until it we transform it into useless desert.  We contaminate our air, our water and our land resources far faster than nature can cleanse them, steadily bringing them to the point of toxicity.  And when we, the rich countries, run short we use the advantage of our wealth to just get what we need from the poor countries.

A few years ago the British government released a study showing that the U.K. consumes foodstuffs equivalent to its entire annual agricultural production by Easter.  In a world of permanent food insecurity (U.N. F.A.O.) that means Britain is a global food parasite.

Very soon, within a matter of decades at the outset, climate change impacts are expected to cut global agricultural yields by up to 30%.   Breadbasket states such as Russia, the United States and Australia have already endured terrible crop losses due to climate change.   What happens if that becomes a regular occurrence?

Which brings me to you and me and our country, Canada.   In the assessment of the Global Footprint Network, we are one of just a handful of countries (most of them northern) that remain in a healthy biomass surplus. 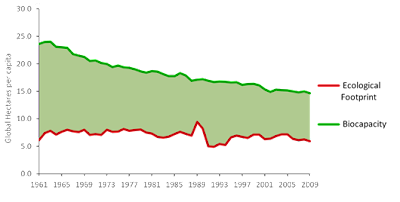 Even though our overall biocapacity has declined since 1960 it remains about double our ecological footprint.   That's not very helpful without something for comparison so here's how our neighbour to the south stacks up. 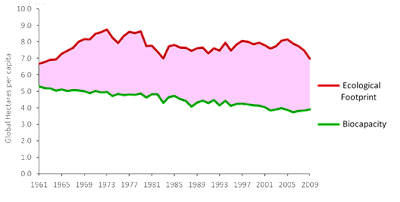 You'll see that, for the United States, the footprint redline hovers way above the biocapacity greenline.   That depicts a nation living on borrowed time.  You might find this surprising, but the U.K. is in worse shape yet. 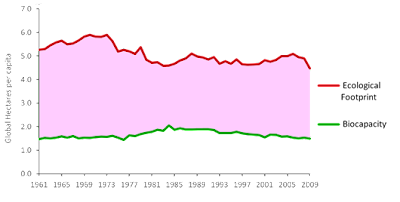 Britain's last Labour government knew the country was heading for trouble and sought to introduce measures to reduce the nation's ecological deficit but it was too late.   The Cameron Conservatives aren't interested in realities like this.

As for the world, here's another dandy graphic. 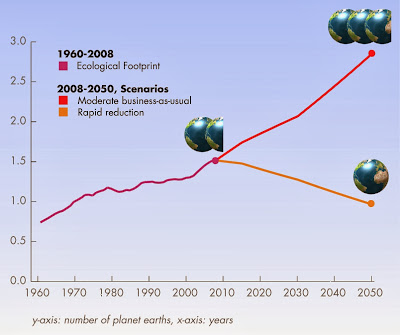 What do you think mankind's chances are of reaching 2050 with out civilization more or less intact without decoupling the global economy from the lethal growth model that's driving us now?

If we want to follow the orange line to the one Earth model we must bring our consumption into line with the Earth's renewal capacity.  That means abandoning the growth paradigm, slashing production and consumption, and even more sharply curbing greenhouse gas emissions and other contamination of all forms.

Canada should start the dialogue about transitioning to a new, "steady state" economic order.  We still have the option of living within our means but that's not assured in the long run.   As Gwynne Dyer wrote in his book "Climate Wars," when it comes to climate change, each nation's greatest threat is the country that lies immediately between it and the equator.   Take one more look at the graphs and figure out what that means for Canada.

Actively advocating for a global transition to steady state economics is essential for the peaceful future of our grandkids if they're to have one.   It'll take a federal government with courage and vision with strong support from the provinces but waiting for others to decide our fate isn't much of an option.
Posted by The Mound of Sound at 3:57 PM

A recent G+M article said the Bank of Canada is calling for 2.6% gdp growth in Canada in the next few years.

Dividing that into 70, that would mean our gdp would double in 27 years, if that rate of growth is maintained.

Well, pessimism of the intellect, optimism of the spirit. I'll keep fighting, or at least trying to persuade people that change is necessary. But my strong suspicion is that we're not going to change direction, and so pretty damn soon (maybe in years rather than decades) the magic tricks are going to start running out in a serious way. The fossil aquifers will run out, the soil erosion will be too great to replace with what newly clearable marginal land there is, the fisheries will become toast on a large scale.

When that happens, a whole lot of bad craziness will go down. Economies will shrink, people will die, the global economy will begin to disarticulate in messy, uncontrolled ways (which would be a good thing except for the 'messy, uncontrolled' part). The only good news is that as I was saying down a few posts, this will seriously impact our CO2 emissions, somewhat moderating our continuing driving of climate change.

It may well be that, through no virtue of our own but mostly just 'cause we got a whole lot of land and not that many people, Canada will find itself with more margin for error than most of the world and be impacted less severely. But if we don't get our shit together that won't help enough.

As you know Mound I also believe Canada is one of few countries left that can attempt to a transition relatively smoothly away from GDP based economics and as such we would be well positioned to lead the way.

Great post. It is incredibly unfortunate our politicians will likely squander this opportunity for petty selfish reasons in service to the global banking cartel. Before Canadians will be able to address any problem control of the issuance of currency must be returned to the Central Bank of Canada, and we must retract from all "free trade" agreements. Until we do that Canadians will never be able to set the direction of type of revolutionary policy needed in this country to accomplish this.

That's right, Hugh. Now run those numbers for four adult lifetimes, 200 years in total. Because it's compounded growth you wind up in Year 200 with an economy that has grown about 300-times larger than it was in Year 1. It's madness but we avert the realization by framing GDP growth in the context of the next year or two.

PLG, your vision of collapse is supported by Jared Diamond and others. Instead of a single society we now have a global civilization of Easter Islanders.

Richard, you and I are both on the same page. Canada does have the requisite advantages to be able to lead out of our toxic economic models and, yes, that would entail the rejection of globalized free trade pacts. Fortunately that works very neatly with steady state theory.

I know about TILMA, NAFTA, China-FIPA, CETA, TPP. They all have investor-rights provisions. Now there is a new WTO deal?

For some time, Hugh, I have wondered whether climate change alone won't wreak havoc on global trade.

Globalism is dependent on a high level of stability among the trading nations in every corner of the world. One thing climate change is already doing is causing nations to wrestle with food insecurity.

Food insecurity as a powerful force in the movement that ousted Mubarak. Food insecurity caused by protracted drought is possibly the most unrecognized factor in Syria's civil war.

How stable China and India will remain over the next two decades is anyone's guess but there are major threats setting in and expected to greatly increase.

At the same time,the growth-based economic order continues but only unsustainably. That candle is burning at both ends.

Eventually the least stable countries will falter and, at some point, the developed world will shut this down to protect their own stability. I think we'll be stunned at the speed that happens.