Just a Reminder to you Dippers. No Woolies for You, These Days You're Farting Through Silk. 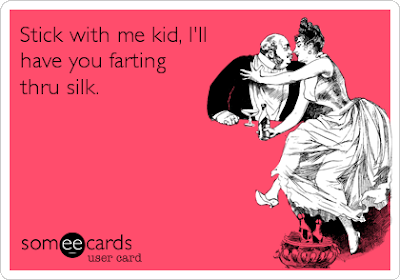 In case you missed it last time, and obviously a good many of you did, here's that link to Yves Engler's (Canada's Chomsky) evaluation of Tommy "Angry Beard" Mulcair's profound neoliberalism.  Read it - and, yes, weep for what once was but no longer.

Yes, Dippers, despite your protestations to the contrary, today's NDP is neoliberal, shot through.  You're no longer the party of Douglas and Lewis. No, that's just a conceit. You don't take your meals in the kitchen any longer. You dine in the parlour now with the silverware, fine china and crystal. You're everything that, for all those decades, you so fiercely rebuked. That greasy feeling you get? That's the hypocrisy coming through your pores.

As Engler put it:

At some point progressive minded party members will have to ask themselves how far down the neoliberal path they are willing to travel.

Meanwhile, Dippers, you would do well to heed these thoughts of another NDP/social democrat stalwart, James Laxer:

There are times in history when truly reactionary political formations come along. Stephen Harper’s Conservative Party is such a formation. While thankfully, it is not overtly racist in the manner of the far-right parties in Europe, it shares all of the other views and instincts of such bodies. Harper himself, as his speeches and writings reveal, would be very much at home in the Republican Party. His government threatens all of the societal innovations the NDP and the CCF before it have inspired. It is not foreordained that the neo-conservatives will succeed in imposing their philosophy on us, but because they have the support of most of the business class in Canada, it’s highly possible. It is, therefore, overwhelmingly in the interest of social democrats to prevent this outcome.

Sadly, the NDP has evolved into a party much like the others. There is little political ferment. Riding association meetings, party conferences and provincial and federal conventions are not occasions for basic debate and education about the state of society and what needs to be done, but rather focus on fundraising, holding raffles and showcasing the leader for the media.

The only time when there is genuine democracy in the NDP is during leadership campaigns. At least during these intervals, real debate becomes possible. Once the leader is chosen, however, party policy, decided on at conventions, is ignored. That has been the case for decades. Between leadership campaigns, the leader, surrounded by his or her inner staff and pollsters, determines the political course of the party.

...A becalmed political party like the NDP is of limited use to working people in a mean-spirited time such as ours. We don’t need a party that no longer knows how to fight and has lost the combative edge of the social democrats of earlier decades.

...The consequence of the NDP’s tactical stance is that the party ends up as just another liberal party, operating from a somewhat more progressive vantage point. The lack of a compelling vision has left the NDP looking much like the other parties, which is why so many people who are searching for something genuinely different are opting for the Green Party.

And, as for you Dippers and your incessant and utterly false bitching about the Green Party being rightwing when, in fact, it's often to the progressive left of the NDP, here's the analysis of another Laxer, Michael that puts that hollow but desperate blathering to rest.

Mulcair spends the other day talking about spending billions on getting hundreds of thousands out of poverty, via programs such affordible housing, increasing income for poor seniors, cutting a tax loop hole on stock options in order to invest billions into pulling childern and families out of poverty, increase the federal minium wage to $15 ect...

He also plans to spend billions on health, the enviroment, education ect...

Fighting poverty, focusing on the environent, increasing taxes on rich corporation, a neoliberal.

And, of course, he's going to balance the budget at the same time, Gyor. Don't eat that stuff, Charlie, it's horseshit. Just because Mulcair says it doesn't make it so. This is a guy whose sense of truth is measured by what he needs to say to get votes from the gullabillies.

One more thing, Gyor. Before you come back here spouting more of your talking points nonsense, read those articles linked in this post. They're written by genuine progressives with a great depth of experience. Read them you silly bugger.

I wonder Mound, if like Harper, Mulcair will implement his Neoliberal policies behind closed doors. He also seems to show, how desperately he wants to be PM. There is something off putting about this. We'll see in October how many seats the NDP get, but I don't think they will get anywhere near the number the press and polls are predicting.

We won't know that, Pamela, until he's prime minister Mulcair. See the essay I put up today on neoliberalism and that should give you a good idea of what you can expect from Mulcair or, for that matter, any of the three contenders.