A Tax on Meat? 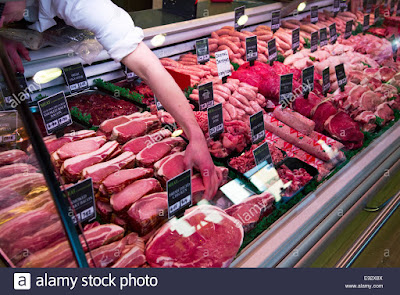 If implementing a simple (and laughably modest) carbon tax can become a threat to national unity* how then would we ever levy a similar tax on red meat?

Climate change types have been arguing for a major cut in red meat consumption for years. Their argument is that raising, slaughtering, transporting and selling red meat is enormously energy intensive and creates massive greenhouse gas emissions.

Now the argument is being made that governments should levy a sin tax on the sale of all processed meats. Treat'em like cigarettes.


Taxing red meat would save many lives and raise billions to pay for healthcare, according to new research. It found the cost of processed meat such as bacon and sausages would double if the harm they cause to people’s health was taken into account.

Governments already tax harmful products to reduce their consumption, such as sugar, alcohol and tobacco. With growing evidence of the health and environmental damage resulting from red meat, some experts now believe a “sin tax” on beef, lamb and pork is inevitable in the longer term.

The resulting higher prices would also cut meat consumption by two portions a week – currently people in rich nations each eat one portion a day. This would lead to a $41bn saving in annual healthcare costs, the research shows.

Okay, how many ways can this go wrong? It's a great way to get the poor and low income citizens to slash their meat consumption. A lot of folks are already just scraping by. The rich? They're not going to care.

This reminds me of the Norman conquest of England in 1066. The Normans were French-speaking. The defeated Saxons had their own language, sort of like English.  When the Normans took over, they really took over - lands, estates, farms, villages, the lot. The Saxon peasants served the Norman lords. Here's where it gets interesting. 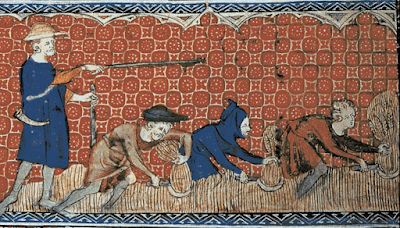 The Saxons raised food, especially livestock, for the Norman lords' table. The best of the best went to whatever Norman ruled your roost. The Saxon peasant raised cattle but the Norman lord ate "beef" a word derived from the French boeuf.  The Saxons raised pigs but the lord ate "pork" - i.e. porc. The Saxon raised chickens but by the time it reached the lord's table it had become "poultry" - poulet. In case you're wondering, the Saxon peasants got to eat the stuff no respectable Norman would touch - and it was "offal."

Maybe we can revive that wonderful old tradition. We'll have the peasants, in white coats and caps, stocking the meat counter and our new lords cruising the counter picking out tonight's dinner. It'll be Kraft Dinner for the plebs.

Then you'll have that gaggle of overstuffed sausage casings - Andrew Scheer, Jason Kenney, Doug Ford and that other guy, Joe Moe or whatever in hell his name is, panting righteous indignation and gnashing their teeth as they mop the drool from each other's lips.

No, I don't think this is a starter. Not in my lifetime.


* That "national unity" reference? Fresh from the 2015 Paris climate summit, Trudeau enviromin, Dame Cathy McKenna, set out to tell her provincial counterparts what they were going to do. It all went pretty well until Cathy showed up in Alberta and was read the Riot Act by her Wild Rose counterpart (NDP, no less). That sent Cathy in retreat, bleating "national unity, national unity" in her best impression of a terrified sheep. It was not her proudest day.

Ultimately, whether it's a carbon tax, smoking tax, alcohol excise, road toll, tire tax and now maybe a meat tax, they all need to be presented (as you alluded to at the end of your piece): a tax on old, white, stupid and unwilling to change tax.
And no, I'm suggesting there's anything wrong with that.


Perhaps, Anon, and yet there's not any surplus of political courage for such things these days.

Will it be the venison or the organs and entrails? That’s been decided. In the long run, we’re doing their descendants a favour. Anyway, that’s what we’ll tell them.

And to bring it up to date, if we could just instill in all those slugs in the dependent classes the initiative to take a little more time and hoof or bike it a few miles instead of revving up their beaters every day to rush down to their places at the Etch Test, we might be able to reduce the carbon footprint to the extent that we’ll no longer have to endure any annoying criticism when we exercise our right to jump on our private jets to take in an out of town ballgame or breakfast with Bono.

So we tax the sin of meat and then less people die.
Would the increase of population offset the carbon saving?


Yes, well, we are at Stage FUBAR