Climate Change on a Rampage 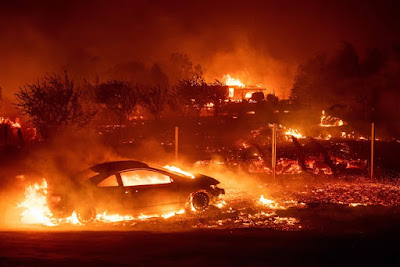 Thirty one dead so far, many found burned to death inside their cars as they failed to escape California's killer wildfires. About 220 are listed as missing. The 30,000 population city of Paradise, northeast of San Francisco has largely been wiped out.

This CNN report from yesterday on the Camp Fire that swept Paradise shows that these are no ordinary wildfires.


Tanah Clunies-Ross woke up in the dark to what sounded like lumps of coal raining down her Northern California home. Within minutes, her family and thousands of people were racing to escape the raging flames of the Camp Fire.

"The smell of the smoke and realizing the smoke was a lot closer than I thought and then seeing flames up to my knees. ... I lost it," she said.
The fire broke out early Thursday morning before sunset, spreading rapidly across Butte County, California, at a rate of about 80 football fields per minute. So far, it has burned through 20,000 acres, injured firefighters and residents and prompted hospitals and schools to quickly evacuate.

...The extent of the destruction is still unknown as firefighters have not been able to access Paradise to assess the damage, Butte County Fire Battalion Chief Bill Reid told reporters Thursday.

A red flag warning is in effect through Friday morning, meaning that firefighters face high winds and low humidity that help spread the wildfire. Authorities fear the fire, fueled by winds, would reach the city of Chico -- a city of 90,000 people where many Butte County families already have evacuated to shelters.


"80 football fields per minute," is really scary. That's more than half a mile a minute. You can't run nearly that fast. You need a reliable and quick car or truck if you're going to reach safety. And there'll be no time for gathering up family treasures.

Daniel Swain, a climate scientist at UCLA and NCAR, the National Center for Atmospheric Research, said the frequency and scope of these fires is changing the way Californians will live.


Swain said officials need to start reexamining how and where homes are built in areas susceptible to wildfires.

"Many times these homes are in desirable places because you're surrounded by pretty views," Swain said. "But they're also high-risk areas, so these are decisions that we have to make — whether it's wildfires or floods or storm surges — do we keep rebuilding in these same places?"

Unreal as these new fires may be it is important to appreciate that these are "early onset" impacts of climate change and that this is just one face of the greater climate change calamity. It is one more urgent warning that we have to decarbonize our societies and our economies as rapidly as possible. The "just not yet" mentality of those who want to push fossil fuels and cling to the pursuit of perpetual exponential growth must change.
Posted by The Mound of Sound at 5:22 PM

.. this is just 'WOW' stuff, Mound.. and 'thoughts n prayers' aint gonna cut it for those who are eventually allowed to return to what ? complete decimation of all they owned? Where they worked ? Gone baby Gone ?

Its good to know though.. that the Country Club president and his trusted brain tryst of Kushner, Miller, Hannity et al can address the California firestorms from a Florida or Scottish golf cart.. and prosecute Hillary's email and the Enemy Of The People fakey news & the invasion of the Honduran ragtag migrants as well as the Canadian dairy farmers.. Its all so great again down there in Georgia and Texas.. Its been a Grate Again suck cesspool.. actually ..


Fair-weather Trump, the guy who can't make it to America's most important WWI military graveyard because of some rain, is now blaming California for the fires. It's all a matter of bad forestry practices and climate change has nothing to do with it. So now he's threatening to withhold federal funds. And of course the knuckle-dragging Gullibillies cheer him on.

An ideal theme song for this event would be The Crests' 1960 hit TROUBLE IN PARADISE.
Definitely no place (or time) to go camping ...