Conrad Black's Absolution of Donald Trump. He's a Lord. Who Are You to Argue? 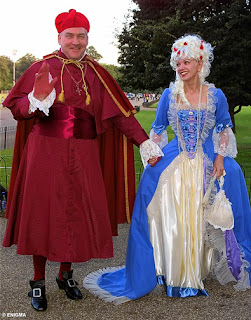 Lord Conrad, the con, Black has taken to the pages of National Review to defend his soulmate, Donald Trump.  Black's point is that Hitler killed a lot more people, so did Stalin and Mao and Franco and all those juntas and murderous strong men from Latin America to Turkey, Pakistan and all sorts of backward nations. America was just fine with those guys, treating them as allies, so why should it raise the bar for its own president?

As for Khashoggi's murder in Istanbul, Black says "pshaw."

Khashoggi had recently become an American resident of convenience, but that did not make his fate at the hands of the government of his country any particular business of the United States. Life is cheap in the Middle East...

Life is cheap. Not for Conrad and Barbara but, hey, they're not untermensch from the Middle East. Then Black defended Trump on climate change:

The hardiest perennial of all was the lambasting by the anti-Trump media of the president’s dismissal of the latest National Climate Assessment, predicting the virtual incineration of the Earth in the balance of this century if we don’t abolish the use of fossil fuels. The same or similar people said almost the same thing in my own memory about over-population, insecticide use, nuclear after-effects, famine, pollution, a new ice age, global warming and climate change (i.e., weather). Helene Cooper of the New York Times advocated becoming “hysterical” as a logical response. Paul Krugman of the same newspaper accused Trump of “depravity” for not listening to Dr. Mann, author of the infamous fictitious “hockey stick” of skyrocketing world temperatures.

But this pompous Brit (he's not Canadian - by his own choice) saved his real bile for Trump's nemesis, Robert Mueller.


And the Mueller special-counsel rumbles toward its third year. So desperate have Mueller’s efforts and those of his rabidly Democratic staff members become that in trying to extort and suborn inculpatory perjury about the president, they are facing a revolt from the victims, led by Paul Manafort from his solitary confinement cell, but emulated now by Jerome Corsi. Rather than cooperate (i.e., lie) after being catechized by Mueller, to avoid facing the extremes of the American kangaroo courts, they are refusing Mueller, and effectively betting on the failure of Mueller to make good on his mission to take down or seriously discommode the president. Mueller is escalating the terror campaign against Manafort by inciting state prosecutions, insusceptible to the president’s power of pardon. The Democrats have been shouting from the housetops about protecting Mueller, but Trump has no interest in shutting him down. Mueller has nothing, and his terrors don’t impress its victims. What is inexplicable is the president’s delay in naming an attorney general. He must have been considering this question since it became clear that Jeff Sessions was a prosecutorial eunuch 18 months ago. The only reason that comes to mind for his waiting is because he wants to see if the Democrats are going to be stupid enough to try to impeach him, which would not only fail and backfire, it would be a gold-edged invitation to send the Clinton campaign and Obama Justice Department in droves to the grand jury, and on from there on the conveyer-belt of American criminal justice to the fate they deserve.

Maybe Conrad is growing a bit addled. That's certainly how he comes across. At least he knows he can shop his diatribe to National Review but that hardly comes as a surprise.

What confounds me is why this jerk is still in Canada. As a felon and a Brit, he obviously can't go back to the States but why do we allow a felonious Brit loudmouth to live in Canada? Do you think it's the Bridle Path address?

As for Black's fulsome and rather ridiculous defence of all things Trump, is Black angling for a pardon from his soulmate?

Your question at the end is one I have asked many times, Mound. The answer, it would seem, is that his self-appointed exultation has fooled too many into thinking he is one of their betters. Nothing, of course, could be further from the truth.


It's a raw nerve indeed, Lorne.

We hadn't heard any bile from that ass in such a long time and now, here he is spoiling my dinner! Do we even really care about that fool?M.J.W.


I care. I care that he's allowed to remain in Canada, a de facto citizen albeit without the right to vote, when less privileged swine would be summarily tossed at customs and immigration.

Harper and the reformatories let the felon back in, but then , he's white. Useless but white..

That doesn't explain why, 3 years into this Liberal government, he's still here, Rumley. Maybe a petition to throw the bastard out would be a good start. He belongs in his rightful place in the House of Lords. Wouldn't that be a lark?

.. I won't and don't - read a fair number of distorted wanks.. cranks. I learned long ago to steer clear of unstable asshats and seek out exemplars.. The payoff is truly huge. Thus Lout Black, Rex Blurphy, Stephen Harper et al fail to stir anything in me but disgust. I may here and there read an op-ed by pond scum like Joe Oliver or apologist creeps, or buffoons like Ezra Levant, just to stay aware of the current state of disease, distortion and fuckery. Ergh, the list of losers is long, shameless & despicable & they infest all levels of news, politics, backrooms, finance.. you name it..

Amazing that those who would have you grovel at their feet now do so themselves.

I did notice that while he's as flowery and verbose as ever, Black's writing seemed to have lost some of its command.

I went back and took a second read only this time I read it from the perspective of a seasoned felon. Suddenly it made much more sense.

Does this guy have any reason to suppose that President Pus-for-Guts might consider him pal enough for the pardon treatment? I had the same thought on that issue when Lord Black engaged in some twisted apologetics for Trump a few months ago: "a president like no other". He wrote a damned book for the guy.

There seems to be a streak of insecurity that runs through some of our big shots that puts them in awe of their American counterparts, always ready with the lip-lock and tongue-job whenever the opportunity presents itself. I really appreciate these guys, because they're the reason I became a multi-tasker. They taught me how to laugh and puke at the same time.

While I realize that his ego would likely prevent him from ever experiencing any discomfort at the notion that Canada's uncomprehending basket-case lefties are displeased by his presence here, I've wondered whether the possibility of any sense of shame or embarrassment was precluded by the ingratiatingly effusive welcome home to which he was treated by members of our precious glamour crowd when he got out of jail.

Has he resumed his seat in the House of Lords, as he seemed to suggest he would in the Jeremy Paxman interview back in 2012, or is the UK still suffering through his leave of absence from his important duties to Queen and country? And since it began with a one-year temporary resident permit, what's the status of his current residency in Canada?

I've always thought that picture captures the essence of the Lord and Lady.