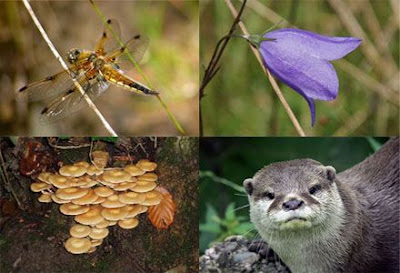 Extinction, Jeebus! It's impossible to believe and yet we're really doing this.

Now it's the United Nations warning that we have two years, that's all, to decide if we're going to wipe out life on Earth.


The world must thrash out a new deal for nature in the next two years or humanity could be the first species to document our own extinction, warns the United Nation’s biodiversity chief.

Ahead of a key international conference to discuss the collapse of ecosystems, Cristiana Pașca Palmer said people in all countries need to put pressure on their governments to draw up ambitious global targets by 2020 to protect the insects, birds, plants and mammals that are vital for global food production, clean water and carbon sequestration.

“The loss of biodiversity is a silent killer,” she told the Guardian. “It’s different from climate change, where people feel the impact in everyday life. With biodiversity, it is not so clear but by the time you feel what is happening, it may be too late.”

...Conservationists are desperate for a biodiversity accord that will carry the same weight as the Paris climate agreement. But so far, this subject has received miserably little attention even though many scientists say it poses at least an equal threat to humanity.

The last two major biodiversity agreements – in 2002 and 2010 – have failed to stem the worst loss of life on Earth since the demise of the dinosaurs.

...The issue is also low on the political agenda. Compared to climate summits, few heads of state attend biodiversity talks. Even before Donald Trump, the US refused to ratify the treaty and only sends an observer. Along with the Vatican, it is the only UN state not to participate.

...The already high rates of biodiversity loss from habitat destruction, chemical pollution and invasive species will accelerate in the coming 30 years as a result of climate change and growing human populations. By 2050, Africa is expected to lose 50% of its birds and mammals, and Asian fisheries to completely collapse. The loss of plants and sea life will reduce the Earth’s ability to absorb carbon, creating a vicious cycle.

A couple of days ago a report came out that found of the planet's remaining wilderness, 70 per cent is in just five countries shown on this map:

That report followed on the heels of the 2018 Living Planet Report that found we, mankind, have, since the 1970s reduced the population of other species by a staggering 60 per cent. As the map shows, we've taken the habitat needed to support all the non-human lifeforms.  Now we've got a fascist elected to govern Brazil who has vowed to open the Amazon rainforest to logging, mining and agriculture.

There's no way around it, our governments, including Canada's, are failing us on each and every one of these existential threats to life on Earth - climate change (in all its permutations), Overshoot (the rapacious over-exploitation of the planet's resources), the looming collapse of biodiversity and the rapid decline in non-human lifeforms, terrestrial and aquatic.

There's nothing remotely surprising about any of this. We have grown to devour our one and only biosphere. When I was born there were 2.5 billion of us, an all time record. Today we've already passed 7.5 billion heading to 9 or 10 billion this century. When I was born the Earth could support a maximum human population of about 3 billion (at early 1970 rates of consumption and longevity). We have already exhausted the Earth that its sustainable human carrying capacity has been estimated at just 2 billion today. We have grown the global economy to more than 1.7 times what the ecology can provide. We have created a civilization that cannot live much longer. It's really that simple.

Meanwhile our political leadership is on cruise control, with the top down and playing the tunes like we were still in the 80s. They're still chasing perpetual exponential growth, pushing us ever further past the finite bounds of our one and only planet.

Jane Goodall has penned a piece for The Guardian, the first essay in the paper's new series, "The Age of Extinction."


We are poisoning the soil through large-scale industrial agriculture. Invasive species are choking out native animal and plant life in many places. Carbon dioxide is released into the atmosphere by our reliance on fossil fuels, destruction of the rain forests and pollution of the ocean. Increase of demand for meat not only involves horrible cruelty to billions of animals in factory farms, but huge areas of wild habitats are destroyed to grow crops for animal feed.

So much fossil fuel is required to take grain to animals, animals to slaughter, meat to table – and during digestion these animals are producing methane – an even more virulent gas than carbon dioxide. And their waste along with other industrial agricultural runoff is polluting soil and rivers sometimes causing toxic algae blooms over large areas of ocean.

Climate change is a very real threat as spelled out in the latest UN report, as these greenhouse gases, trapping the heat of the sun, are causing the melting of polar ice, rising sea levels, more frequent and more intense storms, flooding and droughts. In some places agricultural yields are decreasing, fuelling human displacement and conflict. How come the most intellectual creature to ever walk Earth is destroying its only home?

...Because many policymakers and corporations – and we as individuals – tend to make a decision based on “How will this affect me now, affect the next shareholders meeting, the next political campaign?” rather than “How will this affect future generations?” Mother nature is being destroyed at an ever-faster rate for the sake of short term gain. This, along with our horrifying population growth, poverty – causing people to destroy the environment simply to try to make a living, and the unsustainable lifestyles of the rest of us who have way more than we need, is the root cause of all the planet’s woes.

...I believe we have a small window of opportunity when, if we get together, we can start to heal some of the harm we have inflicted. Everywhere, where young people understand the problems and are empowered to take action – when we listen to their voices, they are making a difference. With our superior intellect we are coming up with technological solutions to help us live in greater harmony with nature and reduce our own ecological footprints. We have a choice each day as to what we buy, eat and wear. And nature is amazingly resilient – there are no more bare hills around Gombe, as an example. Species on the brink of extinction have been given a second chance. We can reach out to the world through social media in a way never before possible. And there is the indomitable human spirit, the people who tackle the impossible and won’t give up. My job is to give people hope, for without it we fall into apathy and do nothing.

"we have a small window of opportunity"

Is there anyone amongst us that can lead us through that tiny aperture?

Caribou is just about finished in BC. Anyong

A cynic (or is it a realist?) might say that we have a collective death wish, Mound.

Don’t waste your vote on Scheer and marginal parties.

This is the point of last week's open letter from Rowan Williams, the former Archbishop of Canterbury, and 90 prominent Brit scientists who wrote: "When a government wilfully abrogates its responsibility to protect its citizens from harm and to secure the future for generations to come, it has failed in its most essential duty of stewardship. The “social contract” has been broken, and it is therefore not only our right, but our moral duty to bypass the government’s inaction and flagrant dereliction of duty, and to rebel to defend life itself."

It's pretty blunt - we have the right and a moral duty to bypass these governments and rebel to defend life itself.


Lorne, we do seem to be developing an indifferent fatalism.


Anon - don't waste votes on Scheer and "marginal parties." For decades I wasted my vote on the Liberal Party but today the stakes are vastly higher and a vote for the Liberal Party or the Conservative Party becomes vastly worse. We're on our own with today's federal government. Aside from their silly carbon tax, that is far too little and much too late, they're doing nothing on climate change adaptation or on the other existential threats of over-exploitation of resources, overpopulation, biodiversity, etc. It was with governments just like Justin Trudeau's in mind that the former Archbishop of Canterbury, Rowan Williams, and 90 British scientists, wrote this:

"When a government wilfully abrogates its responsibility to protect its citizens from harm and to secure the future for generations to come, it has failed in its most essential duty of stewardship. The “social contract” has been broken, and it is therefore not only our right, but our moral duty to bypass the government’s inaction and flagrant dereliction of duty, and to rebel to defend life itself."

Yes, that's an open call to exercise our right and our moral duty to rebel against governments just like our own.

So, please, don't lecture me on wasting votes when a vote for the Liberals or the Tories is worse than a wasted vote.

Most folks would be willing to reduce their own carbon footprint when leaders would lead by example.
Helicopter vacations in Caribbean with THREE kids are inspiring, alas in an opposite way.