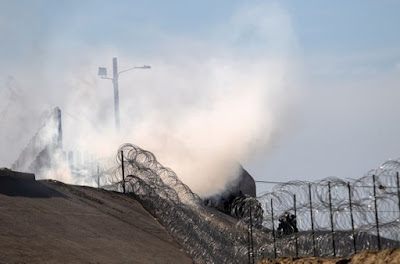 I've experienced tear gas only once, in nuclear, biological and chemical warfare training. It's an experience I'd never want to repeat although what I got was probably a low-grade gas.

Most people I know think of tear gas as something they see in clouds unleashed on protesters on TV. It looks benign enough, unpleasant to be sure but no big deal.

Scientific American reminds us that there's nothing benign about tear gas and there's no excuse, none, for American border personnel to use it against children. To those kids it was torture.

Before the tearing, the choking and the pouring mucus, tear gas burns. It causes searing pain in the eyes, skin, lungs and mouth—or anywhere it touches. “It can be overwhelming and incapacitating. You can be forced to shut your eyes and cannot open them,” says Sven-Eric Jordt, an anesthesiologist at Duke University. And then comes the coughing and the nausea and the vomiting. What causes these chemicals to have such devastating effects on the human body?

Jordt has studied tear gas for over a decade, but he doesn’t think tear gas is the best term for the weapon. First, he says as a technical point, they’re not gases; they’re powders that billow into the air as a fine mist. “I think of tear gas as a pain gas,” he says. “Because it directly activates pain-sensing receptors.” Weapons like sarin gas cause muscle paralysis that can lead to suffocation. These are designed to kill, while tear gas’ purpose is to repel crowds through maximum misery. Specifically, all tear gas agents activate one of two pain receptors, TRPA1 or TRPV1, and can be classified into two broad categories based on which of those receptors they activate.

The first category, TRPA1-activating agents, includes the chemical called 2-chlorobenzalmalonitrile or CS gas. This is one of the agents used by U.S. law enforcement and, according to a U.S. Customs and Border Protection spokesperson, is what CBP officers fired into crowds of men, women and children at the U.S. southern border on Sunday. “A lot of children fainted. My daughter also got hit. There were pregnant women there and a lot of older men, too,” a witness told the Washington Post on camera on Monday.

...Children are particularly at a high risk for injuries from these agents, Jordt says, because they are so small. “They are shorter, and there are increased concentrations are near the ground. They also have a smaller body surface and lungs so the potential for injury is higher,” he says.

It pains me to say this but I believe Americans, perhaps most, are becoming acclimated to brutality. Too many whites seem inured to brutality when it's visited on their black countrymen. Few get particularly upset when the victims include women and children from troubled lands who mass on their border.

There was a time when American strike fighters bombing Afghan weddings created a stir. That's over. Rinse and repeat, rinse and repeat. Sorry, boring.

Waterboarding also created a stir but there was a lot of pushback. Donald Trump says he's a fan of waterboarding claiming, contrary to the accumulated evidence, that "waterboarding absolutely works."

Add this to the mounting list of issues that might make you ask if it isn't time for Canada to begin distancing ourselves from America. Donald Trump isn't merely a pig with the sexual appetites of a goat, he's an animal.
Posted by The Mound of Sound at 1:15 PM

For Trump, Mound, power and brutality are synonymous.

But waterboarding does work. When it is imperative that you have a believable lie to base your evil foreign policy on, waterboarding people will absolutely get them to say whatever fiction you want them to endorse.


Trump does have a powerful sadistic streak in him, Owen. In terms of personality traits it's right up there with his aversion to telling the truth and almost ranks with his abject refusal to ever take responsibility for his blunders.

Yes, PLG, in that context waterboarding does indeed work, just like electrical shocks to the subject's genitals.