Trump Fatigue? A Refreshing Newish Way to Look at the Old Bugger. 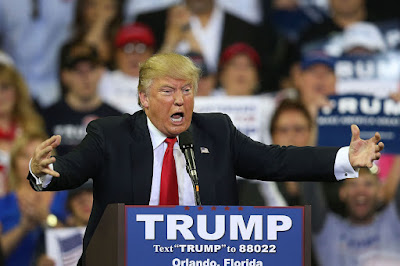 Everyone from psychiatrists to cab drivers have analyzed the Great American Bloat, Donald Trump. It's a pastime now so shopworn as to become dispiriting. Yet The Week's Windsor Mann has a few fresh insights into the dark heart and weak mind of the American president.

Trump's social autism is the source of his appeal. A Pew surveyfound that what Trump's supporters like most about him is his personality, not his policies. They like his personality more than his policies for the same reason that men like the sex scenes in pornography more than the plots: Vulgarity is the point.

Like many people, Trump is at his worst online. As of July, he had insulted 487 people, places, and things on Twitter. Technology, by separating us from the consequences of our actions, makes incivility easy. The internet is a rude place because it's a safe place. You can fight people without getting punched in the head. Online, the only things that get hurt are feelings and careers.

...Trump isn't solely to blame, but he's primarily to blame. He makes mean people meaner and dumb people dumber. The internet gives people a platform to be nasty. Trump gives them a template.

Putative Christian leader Jerry Falwell Jr. tweeted recently, "Conservatives & Christians need to stop electing 'nice guys'. They might make great Christian leaders but the US needs street fighters like @realDonaldTrump at every level of government b/c the liberal fascists Dems are playing for keeps & many Repub leaders are a bunch of wimps!"

...Lord Moulton, an English judge, noted that a nation's greatness is measured not by compliance with the law but by "obedience to the unenforceable," that is, by its manners. Manners are the tax we impose upon ourselves to get along with each other, to make life more bearable.

Trump is a reminder of how not to behave. To make America great again, ask yourself: What would Trump do? Then do the opposite.

Good advice, Mound. And one should avoid Jerry Jr.'s sanctimonious advice at all costs.

There are myriad options like those to describe El Trumpo the Coward.. but his minions and enablers require equally incisive yet different diagnosis. They're essentially all diseased of course, but as a Canadian first & a North American second its important to look after business here first. But there's the rub.. there seems a lockstep desire among many of our politicians & especially so called Conservatives to be in the same groove as the Republicans.. certainly re vote suppression, gerrymandering, legislative 'grooming & gooning', judicial manipulation, defying accepted Law & the Courts.. and so on.. especially in regard to Environmental Destruction, Pollution, Complete Deceit, Evangelistic Fantasy, Greed.. I could go on and on including Marital Cheating or Social Media Dickwaving

I don't care if Americans take the bible literally.. or jump off cliffs thinking gawd with ensure soft landings. Nor do I care if Canadians are agnostic or fervant believers in The Spaghetti Monster.. all good, Hell, go with your flow & go big or don't go !

But.. as I related in a comment over at Northern Reflections this ayem.. Public Servants work for US.. Its called Public Service.. and really the only reason we have elections. WE are the Client, the Customer, the Employer .. and they are the employee as are there staff ! Begone with the 'Honorable' whatsoever. Is Kent from Georgia or Tony Clement 'honorable' ?? I see Dotard Donald as the epitome of the dregs of society yet he's saluted by f'n US Marines ! Is delivered for his neverending golf weekends aboard Air Force One. Public Servant ? Oh right.. Our PM in Waiting, Evangelical grifter & Ottawa boy Andrew Scheer thinks & proclaims Alberta dilbit is the elixer.. the very finest, cleanest oil on Spaceship Earth.. and we harbour this pedantic dullard at Stornoway as if he's a Saudi princeling of some great import..

It seems political parties to the south can nominate dullards, quislings, sellouts, liars, rascists, frauds and parasites and get almost 50% of the votes.. Here in Canada its time to put on the stomping boots.. or more politely, stsrt printing out the termination papers 'with cause'. The political parasites are gaming the system, screwing us all over.. selling out.. captured. Not acceptable.. not any more

You make some great points Salamander, but the notion of political types working for WE is not possible when millions upon millions are spent to sway public opinion and put the long list of grifters, bible thumpers and cons into office. Recently read Dark Money by Jane Meyer- a must read. A bit of fresh air to the south with the recent mid terms but the dems could not crack the all important senate nor unseat such obvious crooks and liars as Cruz, Scott and Kemp, however I will give them Mr Wisconsin. Our main concern in the short term is preventing an Ontario debacle at the federal level and hopefully, Mr Bernier can help out with that and drain some of the completely lacking in leadership or other qualities, Scheer from ever moving across the street. Dangerous times we live in.

Isn't that the truth? Anyong