There's More Than Liberal Democracy in Peril from Right-Wing Populism. They're Also Out to Derail Action on Climate Change.

Paul Krugman had it right when he denounced climate change denialists as "depraved." And the depraved, also known as right-wing populists, will be out in force at next week's COP24 climate summit.

Germany faces its own threat in the form of the far-right Alternative for Germany (AfD) party.


The environmental affairs spokesman for the far-right Alternative for Germany (AfD), Karsten Hilse, is someone who rarely raises his voice or breaks into the sneers of party heads Alice Weidel and Alexander Gauland — to say nothing of the climate-change-denier-in-chief, US President Donald Trump.

But Hilse's message is just as radical. The 53-year-old father of three says that the mainstream political parties and media have created nothing less than an irrational environmentalist religion, forcing ordinary people to do penance for imaginary sins in changing the planet's environment.

Hilse's goals are to have Germany leave the Paris Agreement, overturn the country's ambitious German Renewable Energy Sources Act (EEG) and, above all, to get people to stop asking what can be done about man-made climate change in favor of questioning whether it's a gigantic hoax put forth by politicians and journalists.

...Since the dramatic decline of the Social Democrats, the Greens and the AfD have been vying to establish themselves as Germany's second political force. In recent regional elections and national opinion polls, the environmentalists have moved past the far-right populists, and not surprisingly the AfD has markedly stepped up its direct attacks on the Greens. In the future, these two parties could represent the main poles on the left and right of Angela Merkel's weakening CDU/CSU in the middle. 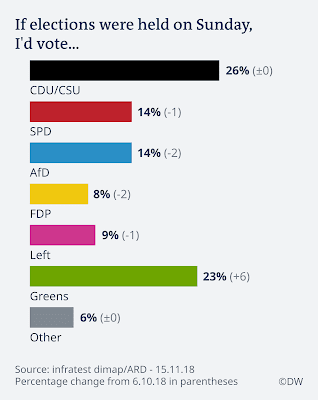 So somebody tell me that the libertarians aren't behind all this right-wing "populism" and disunifying "economic nationalism". Take some time to hear out Steve Bannon. You don't have to like what he's saying or the way that he looks. Just take your time and pay attention; you don't even have to be an expert at listening between the lines. Never mind the "globalists". Look at where the libertarians are putting their money. They've always understood what turns the crank down at the Etch Test and Steve isn't making any secret of it. They've got us pegged, and they know that we're so stupid that they're risking nothing by telling us that and how they're playing us. It's the greatest bait-and-switch con-job since the Counter Reformation. Your average rosary-clutcher has a better understanding of cause-and-effect than we do.

So let's step right into it. I think I'll call on all the rest of my fellow dilettantes to see whether any of them can come up with a reaction even more sophomoric than "post-nationalism".

They do have us pegged, John. I wonder if they also see how this ends?

Perhaps the emergence of the former is predicated on the pretenses of the latter.

Willful ignorance is a two-way street!


Deniers are the truly depraved, Anon. At least the pretenders don't seek to confuse the public with RJ Reynolds attacks to sow doubt. Wilful ignorance? I expect you would know more about that than I but thanks for playing.

You nailed it, Cap. Climate change raises all manner of liability/responsibility problems for the industrialized, affluent, major emitters. When you go back to the outset of the Industrial Revolution, we are the main GHG culprits and most of the atmospheric CO2 and NO plus a good chunk of the methane is effectively ours.

Unless we start making good on our financial promises, the Third World population bomb will only increase the demand for ever more fossil fuels, including coal. The International Energy Agency confirms it and a recent announcement from OPEC suggests they're eagerly counting on it.

Pretenders are the people who have put this world in the shape it presently is in.