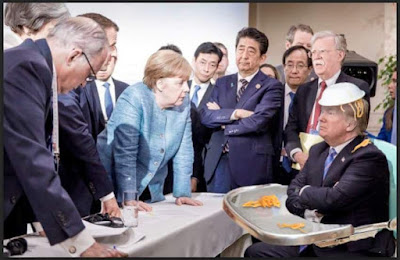 It's perceptible, even palpable. Donald Trump is showing the strain of the mid-term elections. He's looking worn and acting like an angry child. This, from the Los Angeles Times:

For weeks this fall, an ebullient President Trump traveled relentlessly to hold raise-the-rafters campaign rallies — sometimes three a day — in states where his presence was likely to help Republicans on the ballot.

But his mood apparently has changed as he has taken measure of the electoral backlash that voters delivered Nov. 6. With the certainty that the incoming Democratic House majority will go after his tax returns and investigate his actions, and the likelihood of additional indictments by special counsel Robert S. Mueller III, Trump has retreated into a cocoon of bitterness and resentment, according to multiple administration sources.

Behind the scenes, they say, the president has lashed out at several aides, from junior press assistants to senior officials. “He’s furious,” said one administration official. “Most staffers are trying to avoid him.”


From Belleau Wood to Arlington National Cemetery to the Asia-Pacific Economic Summit, Trump has gone AWOL.


What makes Trump’s perceived snub to the Asian powers more significant is that it comes on the heels of his brief European trip, which showcased his growing isolation from transatlantic allies. French President Emmanuel Macron rebuked Trump in a speech, stating that “nationalism is a betrayal of patriotism” as the U.S. president looked on sullenly.

Trump’s relations with Latin America, already strained, are little better after the White House last week announced that he was reneging for a second time on a commitment to visit Colombia. He had planned to go there later this month on his way back from the G-20 meetings.

In April, he’d sent Pence in his place to the Summit of the Americas in Peru, citing a need to remain in Washington to monitor the U.S. response to a chemical weapons attack in Syria. He’d planned to visit Bogota on the same trip.

This time around, there appeared to be no extenuating circumstances preventing a visit.

There's a natural temptation to revel in Trump's apparent misery but Schadenfreude shouldn't mask the fact that this guy is seriously unstable and volatile. Worse yet he seems to be moving to purge the voices of moderation from his inner circle, swapping them out for radical sycophants.

Meanwhile, Anne Summers writes in today's Sydney Morning Herald that Trump may be a one-term president. Summers says he's cornered - and he knows it.


A helluva lot was riding on the [mid-term] elections and even if on the night it might have seemed the results were more a rebuke than a repudiation, on closer examination the results are not just good, they are very good.

The next two years are going to be very nasty. Trump is cornered and he knows it. His behaviour since the election indicates how he intends to fight: firing his Attorney-General, no doubt setting in train an attempted firing of Special Prosecutor Mueller, escalating his war against the media.

...We know from Bob Woodward’s recent book, from "Anonymous" in The New York Times and from almost everyone who reports on the White House that we are dealing with an unmoored and dangerous man. We also know that Mueller has a truckload of sealed indictments, including against members of Trump’s family.

Trump has no political skills. Nor does he know how to govern. But neither of this matters any more.

He is fighting - not for his political life, which is all but over, but for his very liberty.

The end game, as US commentators are already calling it, is likely to get very ugly.

But it is the end we are looking at, which means we can look forward to it being over.

...Trump’s so-called base is now locked geographically and demographically. They are overwhelmingly white in a country where "minorities" are fast increasing their share of the population and they are mostly older, often considerably older than the Democrats’ new base. The future is not with them, not even the near future based on Tuesday’s results when a clear majority of Americans delivered a clear and unambiguous verdict on their President.

... But the most heartening result for those worried about incipient fascism was the decisive return to blue of Michigan, Wisconsin and Pennsylvania.

In Michigan, 57.5 per cent of registered voters, the biggest voter turnout since 1967, went to the polls. In the Wisconsin suburbs the affluent Republicans who had kept the odious Scott Walker in the governor’s mansion turned their backs on him – and Trump. In Pennsylvania the Democrats picked up three seats and a governor with almost 60 per cent of the vote.

These are the three states that enabled Trump to win in 2016. Now, with Democrats in control of their redistricting and with 46 Electoral College votes between them, they will ensure he cannot win in 2020.

I read about Trump's protracted funk/tantrum. It put me in mind of the last days in Hitler's bunker.


Odd you say that, Lorne. I thought the same thing.

.. more and more I wonder if we're just seeing political abberations or a true trend. After all, rabies tends to cleanse certain species.. and though a crude analogy, so does cannibalism within species.. I have seen it with rats and essentially any omniverous species. Political animals of course, the kind we see rampant in North America are probably self destructive & parasitic.. even if not taken out by natural selection, their children will go after them or vice versa.. Trump, Kenney, Ford, Ryan.. all show a self delusional self destructive knack.. I guess we'll see.. but with such twisted folks.. there's always baggage or victims or evidence that may turn the tables

There does seem to be a pathology running through the political caste these days, Sal. I don't know what it is but it seems to surface in many, perhaps most countries. Whatever it is it rarely represents the public interest. Even in Canada the public interest is subordinated to the partisan political interest.

Trump has always been the author of his own misery. Until now, he's been able to find scapegoats to blame. Now he's alone. And that makes him extremely dangerous.

I agree, Owen. He could be dangerous.

I can see the analogy of Hitler, but according to history, Eva stayed with the Fuhrer until the end. I don't see Mal-yawn-ya hanging around for more than 30 seconds after the shite hits the fan!

While I am encouraged by the Dems inroads after the mid-terms, I'm not so sure they will actually step up to the plate and make something of what they accomplished. After all, once elected, it seems that the first goal is to get re-elected, if history tells us anything.

They all need to very strategic and make use of Pelosi's experience, but most of these young bucks will more than likely want to be at the "head of the class" before they even begin to understand the real world of big money politics.

I saw that in BC when Mike Harcourt got the NDP elected and then watched the "old guard" undermine everything he represented and ended up throwing him under the bus. We now know how that all turned out --- the BC faux Liberals!!!

This link is to an intriguing article in Salon Magazine - regarding white evangelicals support for El Trumpo
lots of live links within the article I have yet to explore & the article has crashed before I got to the end on my ipad.. several times. It seems certain the same phenomena applies to Canada.. though not as intense.. yet

But as I have commented in the past, re North American 'politics' - I wonder about this era of political animals - faux christians - and the electorates getting horseshit salad / hold the lettuce & tomato / extra ideology please - instead of Public Service responsive to ridings or congressional districts etc. Thus I suggest we look at reconforming governance, taking control of or limiting political parties that think they can dictate who we get to vote for. Its just a circle jerk extravaganza currently.. non nutritious, old, mouldy tired

So two main points .. One is that more and more we see and get career political animals and backroom partisan operators driving 'Their Brand' - Thus in Canada you or I only get to vote for who The Political Brand puts forward.. its as if they are cereal.. or under arm deoderant or cel phone brands or cars or soccer teams. The Party Whips are there to enforce block support of the current Brand Appeal.. not the dreams, needs or wishes of the electorate or citizenry.. or the good of the country

Second point is the political animals like Jason Kenney, Christy Clark, Donald Trump, Ezra Levant, Ted Cruz, Kellie Leitch, Huckabee Sanders, Andrew Scheer, Doug Ford, Mitch McConnell are essentially 'turds' - Forget the faux christianity, attending church, nice suits, lecturing us on morality, women's rights, heathen immigrants, energy security, or the need to use AR-15's for hunting some un-named wicked scary species. These are people who have been polishing their 'self turd being' for so long that they're impervious to reality. They run on polls, media exposure, votes and endlessly repeat their self induced turd polishing mantra. That's all they're good at.. and if serial lying, deceit are needed.. no problemo.. out comes the holier than thou spew.

These are the last people who should be employed to deliver Public Service. Should we hire alcoholic, live in mommy's basement, video gameplayers to deliver the mail? I think not. If a political animal is financed by corporate entities.. ie captured.. how can we expect them to 'serve' us ? They are busy busy continuing to polish the turd.. themselves. Its who they are. Just like the scorpion stinging the frog & drowning both of them.. 'its their nature' - they're turds, shiny.. oh so shiny ! And we let them control how we get 'public service'

That's how we ended up with a PM in Canada who tacked on two years to seniors receiving Canada Pension Plan payments. That was the scorpion stinging us and putting the money into 'General Accounts' to squander on flopdick social media wankers like Tony Clement or endless propaganda.. Note the faux christianity of Stephen Harper.. and his turd polishing ReformerTory evangel creeps like Jason Kenney or Jenni Byrne

Lulymay, you spelled her name wrong. It's "Imelda"

I do agree that the Dems have to be careful not to overplay their hand. As for Pelosi, I think it's time the Dems hand power to a younger crew. It was the youth vote, after all, that handed them control of the House. Everyone in politics has a shelf life.


Sal, the political realm has indeed decayed. The very best thing the Americans could do is to introduce tough election campaign finance laws. There's a money choke chain around the neck of every office holder in the US. Even judges have to fundraise. It leads to "transactional government," a cancer that beset Rome prior to its fall.