Alberta's Bitumen Pits are a Racket and We've All Been Sucked In. A Made-by-Conservatives Fiasco. 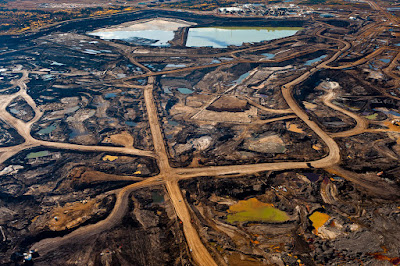 You've probably seen how the mob will takeover a small but profitable business, bleed it dry and then split, leaving the empty, ruined hulk a dead loss for out-of-pocket creditors. That's not far off the mark when it comes to the Athabasca bitumen pits.

The Tar Sands, properly managed, could have been a terrific asset for the Wild Rose province. If only they had listened to Peter Lougheed. Only the mob (foreign energy giants) moved in, co-opted Alberta's political caste (Conservative and New Democrat), negotiated laughable royalty deals that put the province on a ponzi scheme economy, and, at the same time pocketed billions in tax breaks, deferrals and subsidies. Now, with the prospect of bitumen becoming an early "stranded asset," Alberta faces the possibility of getting stiffed for upwards of $260 billion in unfunded Athabasca remediation costs. If that hazmat site is cleaned up at all you can expect most of the cost to be picked up by Ottawa. Alberta, you might have heard, is once again predictably broke.

In today's Tyee, Canada's top petro-scribe, Andrew Nikiforuk, writes that freewheeling Alberta is very much the author of its own misfortune.

The Alberta government has known for more than a decade that its oilsands policies were setting the stage for today’s price crisis.

Which makes it hard to take the current government seriously when it tries to blame everyone from environmentalists to other provinces for what is a self-inflicted economic problem.

In 2007, a government report warned that prices for oilsands bitumen could eventually fall so low that the government’s royalty revenues — critical for its budget — would be at risk.

The province should encourage companies to add value to the bitumen by upgrading and refining it into gasoline or diesel to avoid the coming price plunge, the report said.

Albertans came blame Trudeau all they want. That is what profoundly stupid people deeply manipulated by their dishonest local politicians will do.

The Alberta government and oil industry is in crisis mode because the gap between the price paid for Western Canadian Select — a blend of heavy oil and diluent — and benchmark West Texas Intermediate oils has widened to $40 US a barrel.

Some energy companies have called on the government to impose production cuts to increase prices.\

The business case for slowing bitumen production was made by the great Fort McMurray fire of 2015.

The fire resulted in a loss of 1.5 million barrels of heavy oil production over several months. As a result, the price of Western Canadian Select rose from $26.93 to $42.52 per barrel.


Bitumen is not oil.


Oilsands crude typically sells at a $15 to $25 discount to light oil such as West Texas Intermediate. It costs more to move through pipelines, as it has to be diluted with a high-cost, gasoline-like product known as condensate. According to a recent government report, it can cost oilsands producers $14 to dilute and move one barrel of bitumen and condensate through a pipeline.

And transforming the sulfur-rich heavy oil into other products is more expensive because its poor quality requires a complex refinery, such as those clustered in the U.S. Midwest and Gulf Coast.

But the growing discount has cost Alberta’s provincial treasury dearly because royalties are based on oil prices.


What's good for the goose is not good for Edmonton's gander.


Canada exports about 3.3 million barrels of oil a day. About half of that is diluted bitumen, or heavy oil.

And the current dramatic price discount has divided oilsands producers into winners and losers.

The winners invested in upgraders and refineries, while the losers are producing more bitumen than their refinery capacity can handle or the market needs.

...The Alberta government knew this was coming.

A technical paper on bitumen pricing for Alberta Energy’s 2007 royalty review warned the province about the perils of increasing production without increasing value-added production.

“Bitumen prices, when compared to light crude oil prices, are typified by large dramatic price drops and recoveries,” it noted. Between 1998 and 2005, “bitumen prices were 63 per cent more volatile than West Texas Intermediate prices,” it said.

A Screw-up with Ralph Klein, Stephen Harper, Rachel Notley and Jason Kenney's fingerprints all over it.


The analysis added that “for bitumen to attract a good price, it needs refineries with sufficient heavy-oil conversion capacity.”

The province’s push to develop the oilsands quickly increased the risk, the report said. “Price volatility for bitumen, especially the extreme low prices that have been witnessed several times over the past several years, is the most obvious risk.”

And the report noted that increasing bitumen production posed “a revenue risk for the resource owner” — the people of Alberta. When the differential widens, Alberta makes less money on its already low royalty bitumen rates.

Companies can compensate for the price risk by buying or investing in U.S. refineries; securing long-term pipeline contracts; investing in storage or using contracts to protect them from price swings.

Many oilsands producers, including Suncor, Imperial and Husky, have lessened their vulnerability to bitumen’s volatility by doing all of these things.

Shrewd energy companies make out like bandits when prices crater. It means they're off the hook for royalties and get bargain-basement bitumen feedstock for their refineries to turn into finished petroleum products.

Peter Lougheed said "go slow." For Klein and every other Alberta premier ever since it's been "balls to the wall." These brilliant Conservative types have been played for suckers.

Imagine, rock-bottom bitumen is transported from Athabasca to refineries in the States where it is turned into marketable oil and gasoline that is then sold back to Canada at a hefty profit. Good for the energy producers and the American economy. A fiscal disaster for Alberta and Canada.


In 2007 Pedro Van Meurs, a royalty expert now based in Panama, warned the government that its royalty for bitumen was way too low in a paper titled “Preliminary Fiscal Evaluation of Alberta Oil Sand Terms.”

Van Meurs noted that upgrading considerably enhances the value of bitumen and would generate more revenue for the province.
But that did not appear to be the policy the government was pursuing, warned Van Meurs in his report to the government.

Low royalties “raise the issue whether it is in the interest of Alberta to continue to stimulate through the fiscal system such very high-cost production ventures,” wrote Van Meurs, a chief of petroleum developments for the Canadian government in the 1970s.

Charging higher royalties would not only slow down production and avoid cost overruns in the oilsands but also encourage “upgrading projects with higher value-added opportunities,” he wrote.

Sorry, Alberta, but you shot yourself in the foot. You got greedy and were conned into inflicting harm on your own people and Canada also.

As for Trudeau, what does his TransMountain pipeline do but perpetuate this fiasco? What is the point of a pipeline that can only undermine the market price of the bitumen it delivers to foreign refineries?
Posted by The Mound of Sound at 10:50 AM

.. Alberta's Minister of Finance, Joe Ceci was crying in his soup today about how unfair it all is.. and that American profiteers are buying executive jets while Alberta suffers. Well, news for him, the Koch Brothers, among others can buy executive aircraft by the dozen, without even blinking. They have upgraders in Minnesota.. ie right across the border so to speak - to handle Canadian bitumin, much of which they own anyway.

Ceci gets through his whiny diatribe without using the word bitumin or diluted bitumin of course.. its all 'our crude' or 'our oil' .. wah wah.. 'if we were Bombardier Liberals would be riding to the rescue' .. all of which Nikiforuk has already blown out of the water.. but try telling mainstream media that.. and good luck n good night.. main media can't differentiate bitumin from buffalo skins or benchmark sweet oil from butterscotch pudding.

Hell n damnation, Mound .. why should a lowly house painter like me 'get' the fundamentals of tar sands and fracking.. and the basic consequences to economy, environment, pollution, species & habitat.. while mainstream media, Trudeau, Kenney, Notely, Horgan, Ford are stumblebum ignorant ?

And while I'm in a good mood, what's with British Columbia spending more $ subsidizing the stripping of natural gas for export - for less than royalty $ coming in ? Do taxpayers 'get this' .. Does mainstream media get this ?

If TransMountain get’s built and switches to Tar Sands Dilbit, the BC Refineries are out of business, while the Washington and California ones have supplies of heavy crude from the Dakota’s.

Nobody in the Ring of Fire has refineries capable of handling dilbit, and nobody has any plans to build one. In addition, other than China and India, nobody has any interest in having to deal with disposing of millions of tons of petcoke as toxic waste. India and China would burn it, but again, they have no plans for buying dilbit.

But there’s always been suckers out there for Field of Dreams scams.

As for BC gas, I can only hope that some day the Greens will get a decisive voice in the legislature. Until then... we're at the mercy of provincial Liberals and New Dems.

This is nothing but a move to own Canada lock, stock and barrel. Cut them off and the co-operations march in. Warren Buffett is one of the very few making money off Alberta's mostly unprofitable electric system. The sage of Omaha owns more than half of Alberta's electric transmissions lines...whomever in the family owns it now! Though the coast of electricity has plunged, transmission costs have skyrocketed. How many Canadians and better still, Albertans know this? And there is Justin...signing ISDS agreements while diving the working population into the poor house. This definitely needs transparency. Scare the shiq out of the population so they will agree to anything they are made to think will bring prosperity while the obscenely wealthy make more and more. Once the "Greens" become the government they will do the same....it is called "Neoliberlism" or "free Capitalism" which BIS...Headquartered in Basel, Switzerland, the Bank for International Settlements (BIS) is a bank for central banks. Founded in 1930, the Bank for International Settlements is the oldest global financial institution headed by lawyers and operates under the auspices of international law stealing all they can through fraudulent means to which the "Greens" will succumb by force of private banks. Anyong

.. must check re Jay's comment.. I am under the impression that Trans Mountain is a dilbit pipeline and the plan is to 'twin' it .. am I mistaken ? And Canadian taxpayers bought it..