Collusion, Anyone? Manafort and Assange. Stone and Corsi and Credico in the Mix. 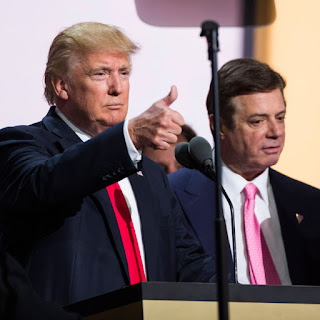 Trump's then campaign manager, Paul Manafort, has disclosed that he personally met with Julian Assange in Equador's embassy in London.  In fact, Manafort's meetings were conducted in 2013, 2015 and in the spring of 2016.


It is unclear why Manafort would have wanted to see Assange and what was discussed. But the last apparent meeting is likely to come under scrutiny and could interest Robert Mueller, the special prosecutor who is investigating alleged collusion between the Trump campaign and Russia.

A well-placed source has told the Guardian that Manafort went to see Assange around March 2016. Months later WikiLeaks released a stash of Democratic emails stolen by Russian intelligence officers.

A separate internal document written by Ecuador’s Senain intelligence agency and seen by the Guardian lists “Paul Manaford [sic]” as one of several well-known guests. It also mentions “Russians”.

According to the sources, Manafort returned to the embassy in 2015. He paid another visit in spring 2016, turning up alone, around the time Trump named him as his convention manager. The visit is tentatively dated to March.

Manafort’s 2016 visit to Assange lasted about 40 minutes, one source said, adding that the American was casually dressed when he exited the embassy, wearing sandy-coloured chinos, a cardigan and a light-coloured shirt.

Visitors normally register with embassy security guards and show their passports. Sources in Ecuador, however, say Manafort was not logged.

For more on this and the other bizarre events of the last 24 hours, check out Vox.

NBC news reports that the Mueller team has an incriminating email on the pre-election Wikileaks email dump. The email is contained in a "Statement of the Offense" issued by the prosecution to Roger Stone crony, Jerome Corsi and his counsel. It's a short read and very much worth your effort.

"Get to (Assange) [a]t Ecuadorian Embassy in London and get the pending (WikiLeaks) emails," read the email to Corsi dated July 25, 2016, according to the draft court documents.

Corsi said he declined the request and made clear to Stone that an attempt to contact WikiLeaks could put them in investigators' crosshairs, according to the draft court documents.

But Mueller's team said that was a lie.

Instead of turning down the request, Corsi in fact passed it along to a person in London, according to the draft court documents. Corsi said that person was conservative author Ted Malloch.

Eight days later, Corsi sent the email to Stone saying that WikiLeaks possessed information that would be damaging to Hillary Clinton's campaign and planned to release it in October.

... On Oct. 7, 2016, WikiLeaks released the first of two batches of emails that Russian hackers stole from Podesta, altering the trajectory of the presidential race.

Mueller's team says in the court papers that Corsi scrubbed his computer between Jan. 13, 2017, and March 1, 2017, deleting all email correspondence that predated Oct. 11, 2016, including the messages from Stone about WikiLeaks and Corsi's email to Malloch.

Corsi remained in contact with Stone in 2017 when the former Trump adviser's connections to WikiLeaks came under investigation by the FBI and congressional committees, according to the draft court papers.
On Nov. 30, 2017, Stone emailed Corsi asking him to write about a person whom Stone had told congressional investigators was his "source" or "intermediary" to WikiLeaks, according to the draft court papers.

Corsi and Stone have identified that person as Randy Credico, a radio host and one-time friend of Stone.

"Are you sure you want to make something out of this now?" Corsi responded, according to the draft court papers. "Why not wait to see what (Credico) does? You may be defending yourself too much — raising new questions that will fuel new inquiries. This may be a time to say less, not more."

Stone responded by telling Corsi that Credico will "take the 5th — but let's hold a day," the draft court document says.