He may be in Argentina but this will have Trump seething. 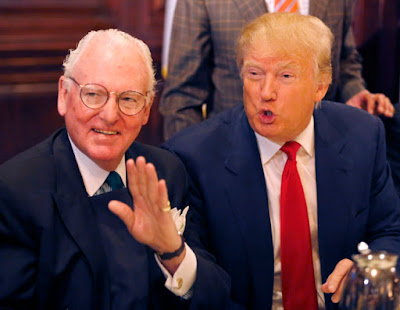 Federal agents have reportedly raided the Chicago City Hall office of a lawyer who previously did tax work for President Trump.

The Chicago Sun-Times reports that federal agents removed everyone from the office of Chicago Finance Committee Chairman Ed Burke on Thursday morning, covering the floor-to-ceiling windows with brown paper. 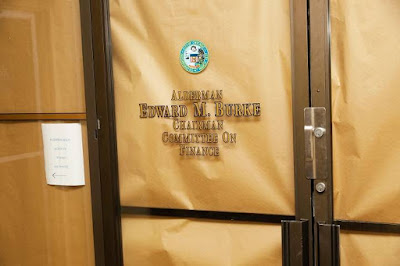 Source says feds showed up this am, asked everyone to leave and put brown paper on the doors. pic.twitter.com/4qJBwzoKF4— Fran Spielman (@fspielman) November 29, 2018


Burke worked for Trump for more than a decade doing property tax work.

Burke’s law firm of Klafter & Burke has worked with Trump’s companies repeatedly to reduce the property tax that Trump Tower and his other properties in Chicago have had to pay, according to the Sun-Times.

Over his 12 years working for Trump, Burke was allegedly able to cut the property taxes on the downtown tower by more than $14 million.


If Mueller is on a witch hunt, Ed Burke's files may show where to find Trump's broom.

Burke says there's nothing for the feds to find in his files. He crossed all the t's and dotted all the i's.  My take? I don't think the feds are out to find improprieties on Burke's part. I suspect Team Mueller's investigators have turned up issues that need information that's only in Burke's files. If they're looking into apparent money-laundering sales of Trump properties to sketchy east Europeans they need to get behind the numbered companies that were regularly used to find the identity of the principals. That sort of detail might well be in Burke's files.
Posted by The Mound of Sound at 4:09 PM

I'd love to see Trump and his crime family go to jail for tax fraud like Capone. Sadly, with the utter corruption of US political institutions, I doubt the Bonespur Buttplug will ever be looking forward to conjugal visits from Ivanka.


It does seem to be unraveling for Trump. Real estate files are treasure troves of information - people, dates, title transfers, who did what when sort of stuff. In fraud work they're a great starting place to expand your net of participants, most insignificant, as far as possible. My tactic was to find the periphery, work the people on the fringes. They will give you information that, as you progress back to the core players, the next group should be able to volunteer. It's when you run into witnesses who claim not to know something that's in their experience or lead you astray that you know you're getting to the vein. It's usually helpful at this point, time and money permitting, to identify at least one more key witness on the periphery and repeat the process again. Very often these people will lead you inadvertently into the heart of the fraud, even though they're completely blameless themselves.

I've heard pundits dismiss this as a purely local (Chicago) investigation that somehow has nothing to do with Mueller. Those people forget that Mueller has been hiving off aspects of his investigation to regional offices all along, notably the federal attorney for the southern district of New York. Dispatching work to the Chicago office would be entirely in keeping for Mueller.

Exposing Trump will expose others of both political parties.
I cannot see Trump going down as he will take too many others with him.
The rot runs way too deep!

Ours to wait and see, Trailblazer. However this evolves I doubt we'll be bored.