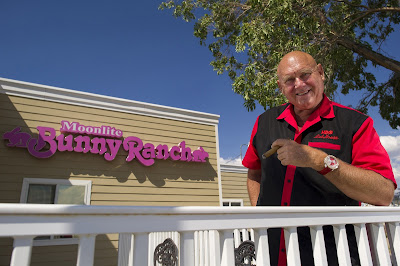 One winner in yesterday's elections, a Republican stalwart, will never take the office to which he's been elected.

He is Nevada brothel owner, Dennis Hof. He was the people's choice for the Nevada state legislature but there's a glitch. Hof died in mid-October after a weekend bacchanal to mark his 72nd birthday.

Dennis Hof defeated Democratic educator Lesia Romanov on Tuesday in the race for Nevada's 36th Assembly District, which includes rural communities and large stretches of desert in the southern part of the state. County officials will appoint a Republican to take his place in the seat.

I feel sorry for Ms. Romanov. Not only were your ancestors wiped out by the Bolsheviks but now you lost an election to a dead pimp.
Posted by The Mound of Sound at 9:10 AM

I wonder if Tony Clement knew this guy.....

It's not the first time a dead guy has won an election in the US. One would think that would have been fixed by now but it's obvious that the various powers that be don't want to.


Remember George w. Bush's attorney-general, John Ashcroft. In 2000 Ashcroft was the incumbent and yet he lost to a Democrat challenger who, like Dennis Hof, had died three weeks before voting day. That freed Ashcroft to take a gig with the Bush administration.

All we really need to know about the people in Nevada's 36th Assembly District is that they would rather have a dead man as their Congressional Representative than a Democrat. That's a rather self defeating attitude.


No, Toby, they would rather have a dead whore-monger than a Democrat. I wonder how often Hof's girls voted.

I read that county commissioners (the elected local governments) making up his state district must appoint another R to fill his term. Voters likely knew this.