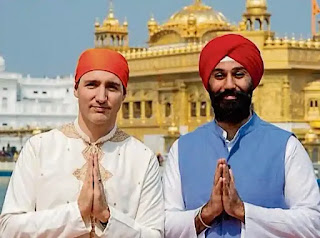 Justin Trudeau is having trouble with an errant MP, a Grewal fellow who represents the riding of Brampton East. Raj Grewal has stepped down, sort of, somehow, citing personal issues that seem to focus on some gambling problem.

I don't know much about Raj Grewal but who can forget Stephen Harper's very own Grewal, Gurmant, who represented the riding of Surrey Central and then Newton-North Delta. Keeping it all in the family, Gurmant's wife represented the adjoining riding of Fleetwood-North Kells from 2004 until 2015.

Grewal arrived in Canada in 1991 and less than six years later was elected to Parliament as a Reform Party MP. He then progressed through the Canadian Alliance and finally the Conservative Party.

Grewal's rise was meteoric. Then opposition leader Stephen Harper praised him as the "Iron Man of Canadian Parliament." Gurmant Grewal's fall was just as meteoric when he produced tapes that he claimed proved Ujjal Dosanjh  and Chief of Staff Tim Murphy sought to bribe him to join the Liberals and help defeat an attempted confidence vote.

That "scandal" all blew up in the Tories' faces when Grewal's tape was found to be heavily edited. Mr. Grewal declined, probably for very good reason, to produce the originals.

Harper's Grewal did not run for re-election in 2006. He tried to stage a comeback in 2015 but was barred by the Conservatives from seeking the nomination. His son, Liv Grewal, won the Tory nomination in the Mission riding but was forced to withdraw by his party. Nina Grewal got bounced in 2015, losing to Liberal, Ken Hardie.  All in all, 2015 was not an auspicious year for Team Grewal.

Unless there's a lot more to the Raj Grewal issue, the Tories would do well to recall the days when they had real Grewal problems.
Posted by The Mound of Sound at 1:51 PM

.. suspect the Grewals will join Tony Clement as political punchline pinatas.. and they are 'volunteers' for the role.. not victims.. 'spending more time with family' is a time honored deflection used by political losers, especially those who dishonored their families..


The BC Grewals seem to have been put out to pasture but the Liberal Raj Grewal can still recover providing nothing beyond his 'gambling problem' emerges. Gambling is an addiction, just like booze. Back in the 70s I interviewed the head of Gamblers Anonymous (USA) and his revelations were eye-opening. Unlike alcohol, addictive gambling almost always comes with a big financial price tag that can lead the gambler to a variety of bad behaviours and foolish acts sometimes involving some sketchy people.

A guy who is now a senator comes to mind. He lost his head in Vegas, ran up a big marker and returned to Ottawa, promising the casino he would get the funds to them. Back in Ottawa he ignored all the calls and demand letters from Nevada. He wrote to say that gambling was illegal in Canada and hence his debt was unenforceable in this country. The casino (I assume it was a casino) then sent two guys to Ottawa to change the senator's mind. They did. He scrounged up what he owed. They left. It could have ended much, much worse.

BTW that errant senator still sits in the upper house.

There isn't anything that couldn't be put passed those sorts of people.

"these sorts of people" - what does that mean?