When the Climate Hammer Falls, It May Look Like This. 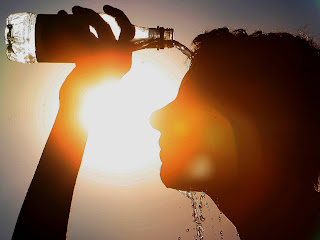 I make an effort to try to keep up with the river of research papers and studies on climate change that now pour in with increasing frequency. Sometimes I have to content myself with abstracts or executive summaries. Some reports I can read in their entirety and make sense of them. They usually make for miserable reading.

One thing I've discovered from following the science is that the lead scientists are often quite willing to answer questions and respond to comments. While it must be a drag on their time, they usually seem interested in building public awareness of what they've found.

A scientist I've found helpful and generous with his time is Dr. Camilo Mora of the University of Hawaii. I first posted an item in 2013 on the prediction of Mora's team that the world will be embarking on "climate departure" beginning in the early 2020s. That's when parts of the world may begin becoming uninhabitable, at least seasonally. In 2017, Team Mora produced a study on 27 ways heat waves will cause human deaths. More posts here, here and here.

Today Mora and his U. Hawaii team published a new study in Nature Climate Change. The abstract is brief but here's a news piece from today's New York Times:

Global warming is posing such wide-ranging risks to humanity, involving so many types of phenomena, that by the end of this century some parts of the world could face as many as six climate-related crises at the same time, researchers say.

This chilling prospect is described in a paper published Monday in Nature Climate Change, a respected academic journal, that shows the effects of climate change across a broad spectrum of problems, including heat waves, wildfires, sea level rise, hurricanes, flooding, drought and shortages of clean water.

Such problems are already coming in combination, said the lead author, Camilo Mora of the University of Hawaii at Manoa. He noted that Florida had recently experienced extreme drought, record high temperatures and wildfires — and also Hurricane Michael, the powerful Category 4 storm that slammed into the Panhandle last month. Similarly, California is suffering through the worst wildfires the state has ever seen, as well as drought, extreme heat waves and degraded air quality that threatens the health of residents.

Things will get worse, the authors wrote. The paper projects future trends and suggests that, by 2100, unless humanity takes forceful action to curb the greenhouse gas emissions that drive climate change, some tropical coastal areas of the planet, like the Atlantic coast of South and Central America, could be hit by as many as six crises at a time.

That prospect is “like a terror movie that is real,” Dr. Mora said.
The authors include a list of caveats about the research: Since it is a review of papers, it will reflect some of the potential biases of science in this area, which include the possibility that scientists might focus on negative effects more than positive ones; there is also a margin of uncertainty involved in discerning the imprint of climate change from natural variability.

The paper concludes that traditional research into one element of climate change and its effects can miss the bigger picture of interrelation and risk.

Climate change also has different ramifications for the world’s haves and have-nots, the authors found: “The largest losses of human life during extreme climatic events occurred in developing nations, whereas developed nations commonly face a high economic burden of damages and requirements for adaptation.”

People are not generally attuned to dealing with problems like climate change, Dr. Mora said. “We as humans don’t feel the pain of people who are far away or far into the future,” he said. “We normally care about people who are close to us or that are impacting us, or things that will happen tomorrow.”

And so, he said, people tend to look at events far in the future and tell themselves, “We can deal with these things later, we have more pressing problems now.” But, he added, this research “documented how bad this already is.”

The paper includes an interactive map of the various hazards under different emissions scenarios for any location in the world, produced by Esri, which develops geographic information systems. “We see that climate change is literally redrawing the lines on the map, and revealing the threats that our world faces at every level,” said Dawn Wright, the company’s chief scientist.

Michael E. Mann, a climate scientist at Pennsylvania State University who was not involved in the paper, said it underscored the urgency for action to curb the effects of climate change and showed that “the costs of inaction greatly outweigh the costs of taking action.”

Dr. Mann published a recent paper suggesting that climate change effects on the jet stream are contributing to a range of extreme summer weather events, such as heat waves in North America, Europe and Asia, wildfires in California and flooding in Japan. The new study, he said, dovetails with that research, and “is, if anything, overly conservative” — that is, it may underestimate the threats and costs associated with human-caused climate change.

A co-author of the new paper, Kerry Emanuel of the Massachusetts Institute of Technology, hailed its interdisciplinary approach. “There’s more than one kind of risk out there,” he said, but scientists tend to focus on their area of research. “Nations, societies in general, have to deal with multiple hazards, and it’s important to put the whole picture together.”

Like military leaders developing the capability to fight wars on more than one front, governments have to be ready to face more than one climate crisis at a time, Dr. Emanuel said.

Dr. Mora said he had considered writing a book or a movie that would reflect the frightening results of the research. His working title, which describes how dire the situation is for humanity, is unprintable here. His alternate title, he said, is “We Told You So.”


As I've written in the past, climate change will be like a prize fight. It won't be a matter of whether your society can take a punch. It will be whether your society can take a flurry of punches and remain standing, round after round. That's the fight we'll be in. Right now we're just sparring and we're doing a lousy job at that.
Posted by The Mound of Sound at 3:03 PM

Yes! And Nestle's will continue taking Canadian Water for nothing while making billions. Anyong

The prospects get grimmer and we continue to party on.

As sobering as your post is, Mound, it is not surprising. The horrors that are impending will be grim indeed.


If we've learned anything from the past 20 years about climate change in all its dimensions it has to be that the science types are persistently optimistic in their projections. Climate science remains anything but holistic. Mora's team works to take the acquired knowledge of each of the many narrow disciplines and reconcile them to make an averaged or balanced projection. It's not easy. They digested more than 400 studies to produce their latest report.

Climate science is also poor at accommodating the non-linear nature of climate change, the abrupt and often dramatic spurts and stalls. These seem to be the cause of how predictions just a decade ago that seemed to foresee shifts by 2100 have now been shown to be 50, 60, even 80 years out.

Where we are let down is on the political level where our pols, primarily eager to perpetuate the same ills that brought us to this abyss, inevitably chose the most optimistic case on which to build their hapless and inadequate policy.

You read it. I read it. We have just two years to arrest biodiversity loss. We have a mere 12 years to slash our GHG emissions by half. Do you see any policy shifts to respond to these dire warnings? I don't. Our own prime minister just days ago renewed his commitment to perpetual exponential growth in GDP and a fullsome expansion of our Tar Sands production and export. He obviously will not take the warnings to heart and, with that, he puts the future of our children, and especially our grand kids in real jeopardy.

if he made the movie, it would be considered science fiction.

It is hard to fathom that people will not change how we live, even though it may cause the death of their grandchildren being born now However, most people in the world are just trying to stay alive and the rest who are doing well, like we in the first world, can't imagine ourselves not living as we do now. At one time we used to think a nuclear war could put us back into the stone age, but at the rate we are going, we will be lucky if climate change leaves even 500M alive on this earth.