Eating Ourselves to Extinction? 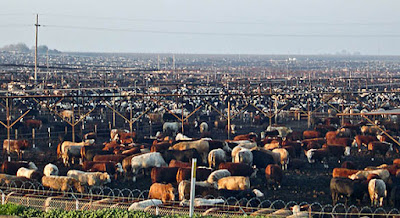 It's the combined effort of 130 national academies of science and three years in the making. The report from the Interacademy Partnership warns that humans are literally eating ourselves to death. Some get too much. Some don't get enough. Those who get too much tend to like the wrong stuff. Those who don't are often deprived of nutrients and vitamins.

The global food system is responsible for a third of all greenhouse gas emissions, which is more than all emissions from transport, heating, lighting and air conditioning combined. The global warming this is causing is now damaging food production through extreme weather events such as floods and droughts.

...“The global food system is broken,” said Tim Benton, professor of population ecology, at the University of Leeds, who is a member of one of the expert editorial groups which produced the report. He said the cost of the damage to human health and the environment was much greater than the profits made by the farming industry.

“Whether you look at it from a human health, environmental or climate perspective, our food system is currently unsustainable and given the challenges that will come from a rising global population that is a really [serious] thing to say,” Benton said.

Reducing meat and dairy consumption is the single biggest way individuals can lessen their impact on the planet, according to recent research. And tackling dangerous global warming is considered impossible without massive reductions in meat consumption.

Research published in the journal Climate Policy shows that at the present rate, cattle and other livestock will be responsible for half of the world’s greenhouse gas emissions by 2030, and that to prevent this will require “substantial reductions, far beyond what are planned or realistic, from other sectors”.


Just like greenhouse gas emissions, food security opens a divide between the have and have not nations, between the developed world and the Third World, that raises no end of questions about equity - fairness, sharing and, for us, sacrifice.  Once again the people of the poorest and most vulnerable countries will see the affluent nations as the primary cause of their plight and what that portends.

I had an eye-opening experience during one of the online courses in global food security I took a couple of years ago. I had thought the course would explore food from a global perspective. Instead it turned out to be a primer in how British grocers keep fresh strawberries on their shelves year round. There was a detailed look into what they called "chasing the sun." Major British food giants established a network of prime farmland from the north to the southern hemisphere, shifting production seasonally from one to the other, ensuring an uninterrupted supply of strawberries to British consumers.

It was when I began noticing certain countries in the Third World where these food corporations operated that I realized most of them were in a state of chronic food insecurity. They were incapable of producing enough food at a price their people could afford. Some of these nations regularly experienced famine requiring foreign food aid. These food shortages trigger all manner of strife and instability within these countries. Yet, while all this is going on, these governments, many of them deeply corrupt, will cut sweetheart, under the table deals to convey large tracts of their best farmland to these foreign food giants - to grow strawberries and such for wealthy foreign consumers. In many cases, Third World countries never established functioning land registry systems and so it becomes too easy for corrupt officials to throw peasant farmers off lands their families have farmed as their own for centuries - for strawberries.

While North America is largely food secure, China and the Middle East play the same game of land banking in other nations. At one point, China made a play for some of the best grazing lands in Argentina. The national government blocked that attempt. China, unable to buy the land outright, then purchased majority control of existing ranching companies and defeated the will of the government.

The online course itself was a dud but it did lead me to issues peripheral to Britain's demand for fresh strawberries.  Around the world, but particularly in China and, to a lesser extent, India, there is an emerging affluent class, what the UN now calls the "consumer class."

One paper I stumbled across, written by three top Chinese economists, looked at the problems associated with a new, 300-million strong, upper middle class and their newfound consumption habits. The paper's conclusion was sobering. China had far more demand than available supply. Almost all Chinese have been lifted out of extreme poverty and expect ever more. China's new consumer class might aspire to Western standards of living but there's just not enough "stuff" on planet Earth to meet their demands. Yet these are China's key citizens - entrepreneurs, technology types, traders - and, without them, China's economic miracle collapses. These economists came to one conclusion - China, like India, would have to create islands of prosperity floating on seas of poverty. Doing that, they admitted, would likely require pretty brutal repression as their own societies divided.

The point of this essay I've tacked on to the Guardian story is that this new report only captures one dimension of this far more complicated and potentially dangerous food problem.  Again it comes down to who gets what. And, this time, the elbows will be very sharp.
Posted by The Mound of Sound at 11:18 AM


Toby, please don't be offended but I removed your and my comments because they really were off-topic.