Is Trump a Magnet for Scumbags? 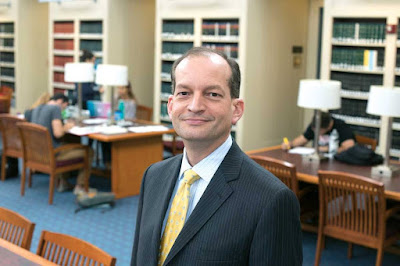 It was an unusual meeting for the then-38-year-old prosecutor, a rising Republican star who had served in several White House posts before being named U.S. attorney in Miami by President George W. Bush.
Instead of meeting at the prosecutor’s Miami headquarters, the two men — both with professional roots in the prestigious Washington law firm of Kirkland & Ellis — convened at the Marriott in West Palm Beach, about 70 miles away. For Lefkowitz, 44, a U.S. special envoy to North Korea and corporate lawyer, the meeting was critical.

His client, Palm Beach multimillionaire Jeffrey Epstein, 54, was accused of assembling a large, cult-like network of underage girls — with the help of young female recruiters — to coerce into having sex acts behind the walls of his opulent waterfront mansion as often as three times a day, the Town of Palm Beach police found.

The eccentric hedge fund manager ...was also suspected of trafficking minor girls, often from overseas, for sex parties at his other homes in Manhattan, New Mexico and the Caribbean, FBI and court records show.

Facing a 53-page federal indictment, Epstein could have ended up in federal prison for the rest of his life.

But on the morning of the breakfast meeting, a deal was struck — an extraordinary plea agreement that would conceal the full extent of Epstein’s crimes and the number of people involved.

Not only would Epstein serve just 13 months in the county jail, but the deal — called a non-prosecution agreement — essentially shut down an ongoing FBI probe into whether there were more victims and other powerful people who took part in Epstein’s sex crimes, according to a Miami Herald examination of thousands of emails, court documents and FBI records.

The pact required Epstein to plead guilty to two prostitution charges in state court. Epstein and four of his accomplices named in the agreement received immunity from all federal criminal charges. But even more unusual, the deal included wording that granted immunity to “any potential co-conspirators’’ who were also involved in Epstein’s crimes. These accomplices or participants were not identified in the agreement, leaving it open to interpretation whether it possibly referred to other influential people who were having sex with underage girls at Epstein’s various homes or on his plane.

As part of the arrangement, Acosta agreed, despite a federal law to the contrary, that the deal would be kept from the victims. As a result, the non-prosecution agreement was sealed until after it was approved by the judge, thereby averting any chance that the girls — or anyone else — might show up in court and try to derail it.

Acosta's not talking, at least not to the Miami Herald.


But court records reveal details of the negotiations and the role that Acosta would play in arranging the deal, which scuttled the federal probe into a possible international sex trafficking operation. Among other things, Acosta allowed Epstein’s lawyers unusual freedoms in dictating the terms of the non-prosecution agreement.

“The damage that happened in this case is unconscionable,” said Bradley Edwards, a former state prosecutor who represents some of Epstein’s victims. “How in the world, do you, the U.S. attorney, engage in a negotiation with a criminal defendant, basically allowing that criminal defendant to write up the agreement?”

Corruption and depravity may dwell in every time and space, but there was a time in a world much like ours when one John Profumo could kill a government. Whether right, wrong or sanctimonious, that's the outcome that the public expected.

But of course, it could be that Macmillan would have had the stuff to survive despite those expectations if he'd once owned a peep show that catered to pedophiles.


You're rekindling memories there, John. Yes, Christine Keeler and Mandy Rice-Davies. And what about our own Diefenbaker government and Soviet vixen Gerda Munsinger who, it was said, worked her way through half of Dief's cabinet?

.. I came upon that story via Twitter earlier today.. and I retweeted links and some of the more shocked comments. The story is essentially 're-breaking' now.. and we may see it explode. Its hard to believe it was buried to a great extent. Its truly one of the most depraved and disgusting stories I've come across lately. I can barely wait for Trump to attempt a deflection, or Donald Jr.. but bottom line, there's a resignation required or even several.. and I fail to see how all the cases can be reburied or bought off. A truly sick miscarriage of justice

Your title says it all.. the President of the United States is a magnet for scumbags.. and perhaps Americans should be grateful that Trumph keeps revealing all the degenerate pus sacs like him who have been trundling along in high places..


"Interesting Times" Sal. Interesting indeed. I hope we emerge intact coming out of the other side.

.. the timeline re This Jeffery Epstein is quite damning

The other extensive & detailed related articles are of course astonishing ie journalism as its supposed to be. But what really caught my attention comes near the end of the timeline. I somehow missed this story completely.. but knew Donald Trump had been accused of raping a 13 hear o,dgir. Of course he denies this categorically (whatever that means) A Trump denial is worth exactly squat, truth being something that lives on Mars as far as he's concerned.

Now I had an incorrect or incomplete understanding re the 'unfounded' accusation. I thought it somewhat dubious, though with Trump, anything is possible. But now we have a legitimate context for Trump, among many many others, engaging in illicit, criminal sexual acts, whether paid for (prostitution) or supplied by Epstein et al. Suddenly the '13 year old rape' lands on truly fertile ground. And again we see the payoffs for silence, the intimidation & threats of powerful people & their lawyers. Ufortunately for all concerned.. ie EVERYONE INVOLVED .. the overall context includes complete miscarriage of justice.

Trump, Acosta - his cabinet Labor appointee, Epstein, Prince Andrew.. and likely hundreds of others.. in my view are now at risk of heavy prosecution, convictions, grand jury subpoenas etc multiple states. Federal charges, FBI investigations (hello Mr Comey) were dersiled by big money, power and corruption. Its simply an astonishing blot.. incredible double standard conspiracy.. and soon to be, media feeding frenzy. If we didnot comprehend how corrupted American Justice had become.. we will soon be doused with some awful truth & revelation. Wait till Robert Mueller is handed a 2nd herculean task to accomplish ! I see this as the End Times of Trump.. the very bitter end


Wouldn't that be manna from Heaven, Sal?

There is no such thing as a "good" billionaire. They are ALL greedy scumbags, even though some hide it better. Too bad so many liberals have forgotten this fact, which is why neoliberalism was allowed to arise unchecked in the first place. Trump and his cronies are merely the endgame.

To answer your question with one word....."Yes".