What Will We See Tomorrow, America's Face or Her Back? 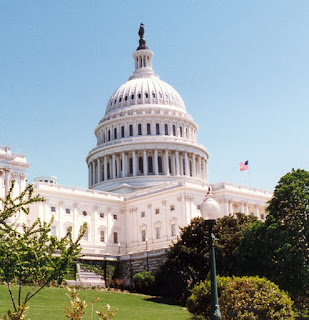 It's unwise to read too much into an American mid-term election. Democrats imagine if they can reclaim the House of Representatives it will mean no end of trouble for Trump as they get a chance to look under the Republican congressional carpet.

What if the Democrats win the House but simply drop the ball? Look at the current House roster.  Hardly a confidence booster. There's minority leader, Nancy Pelosi, who is of that vintage that is far more likely to be attending a friend's funeral than a friend's wedding. The good news is that, if the Dems do take the house, Pelosi has pledged to be a "transitional leader" and hand the gavel off to a new generation of leader.

Adam Schiff, former US Attorney for the Southern District of California and nemesis to Republican Devin Nunes, would be a prospect but his skills would be better put to unraveling everything that Nunes spent the past two years attempting to bury.

Let's hope the transition is fast and friendly so that it doesn't distract House Dems from the important job they'll have - if - they take the House.

What if that doesn't happen? What if both houses of Congress remain in Republican hands? Early on Trump told his base that this election is really all about him. Lately he's been backtracking, saying that the election isn't about him after all. However, if the Repugs remain in control tomorrow morning, Trump will be back crowing that it was a ringing endorsement of his brilliant leadership.  That's when we'll be left looking at America's back, not her face.

When authoritarians are on a roll, people disappear. If Trump claims the mid-terms as a win for his presidency, people apt to disappear may include attorney-general, Jeff Sessions; his deputy, Rod Rosenstein; and, of course, Robert Mueller and his investigation into the most corrupt president in American history. Trump might also cut loose his remaining generals, his handlers, Jim Mattis and John Kelly, tilting power to radicals such as John Bolton.

As for America's traditional allies, can we expect anything better than the mauling we've had at the hands of the Oval Office bully for the past two years? Trump doesn't see allies. He sees employees who aren't nearly deferential enough to the boss.

We've already seen Macron brand the US a potential authoritarian threat to liberal democracy in Europe, one that, like Russia and China, Europe needs to defend itself against.

In Canada, where the yoke of neoliberalism remains as strong as ever, the Right (Scheer and Bernier) are already toying with illiberal authoritarianism, Scheer making noise about "fake news" journalism and Bernier advancing a full-blown form of libertarian rule. If Macron is worried about the health of liberal democracy in Europe, perhaps it's time for us to worry about the strength of the democratic tradition in Canada, especially with Trump next door and Conservatives begining to ape the Orange Ape.
Posted by The Mound of Sound at 10:12 AM

.. the salamander & the salamander horde on Twitter have our tiny ears to the ground, Mound.. We never gamble but feel it right to our tiny toes and the tip of our tails say.. Democrats prevail.. and in large part due to an outpouring of Millenials voting .. and of course women.. and a highly motivated black vote.. plus an angry and huge range of Hispanic, Muslim, expatriate outpouring. Yes there are also educated males who will vote along with myriad factions.. and that would include Environmentally aware Americans disgusted by everything Trump represents in his crude diseased attacks.

What will astonish us.. is if there are actually more motivated slugs and thugs that will vote for the assorted losers, creeps, cheats of the GOP - than Americans who have awakened or regained their coherence, confidence, courage, common sense.. and will vote with an intelligent intention to toss the Trump experiment.. and retake the House, possibly even the Senate..

At 6 PM here on Toronto, the first states are about to report.. and we can see the first signs of continued democratic suicide or signs of recovery and concern by Americans.. fivethirtyeight.com reports on the hourly schedule by state etc.. and how to interpret some early returns, wins, losses & signs..

.. cat's out of th bag.. its the morning after. Dems grabbed almost 50 seats back.. the 23 or so shortfall of their minority status in the basement & likely another 20 or so.. Trump calls it 'a success' but that's a quick public bandaid - probably PR advice from his consorts, Hannity, Limbaugh, Miller & a golf pro or two who polish his balls.

We see shots of a bloated el Trumpo searching in the rough for his balls, wild fairway swings.. but never a putting shot. If its on the green somehow or other.. that's a gimme ! Mark down a par or birdie while he, a flunkie, Secret Service or a US Marine or Peyton Manning or Lindsey Graham drive Golf Cart One off the putting green

Robert Mueller is now buttressed, Trump, despite being the supreme being of Spaceship Earth is now in a corner.. no rope a dope when you're in the corner.. Let the battering begin..