Messing Up the Food Chain. Can't We Leave Enough for the Whales?


Okay, they're not really whales. They're a large species of dolphin but the Orca, a.k.a. Killer Whales, are one of the most majestic creatures here on the wet coast. Unfortunately, like other non-human species, we're driving them into extinction.

How so? In my opinion, it begins with the annual harvest of roe herring. A large fleet of fishing vessels follow the herring as they migrate south along the east coast of Vancouver Island to meet the lucrative Asian demand for herring roe. 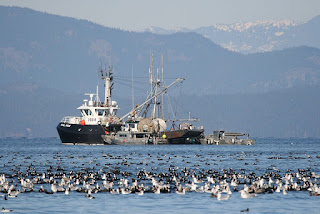 You know when the herring are passing through by the arrival of the fishing fleet and various creatures from sea birds to sea lions that arrive to feast on the hapless herring. Sometimes the sea changes colour to a pale green from the milt released by the males to fertilize the eggs. 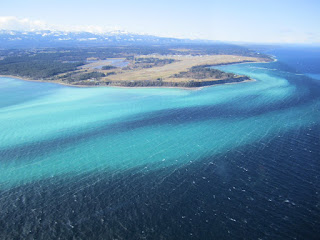 It's not just sea lions and sea birds that depend on the availability of herring. So too do the salmon. Many people link the decline in salmon stocks to the commercial fleet's predation of the herring. 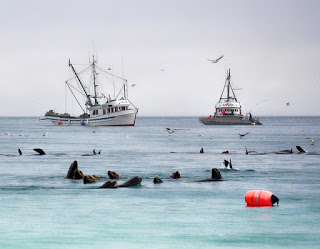 Then there's the food chain. Next rung up are the Orca, the magnificent and majestic beasts that live in the Salish Sea. They're starting to run out of their favourite fish, salmon, and they're endangered because of it. Part of the Orca's predicament, in the mind of the locals at least, is, once again, the commercial fishing fleet. For the salmon, the commercial boats present a double whammy threat. 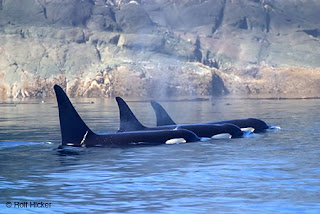 Now the southern resident Orca so beloved on our coast are endangered.


The unfolding tragedy of the southern resident killer whales – and the government response – has exposed a complex ecosystem in crisis. Chinook salmon, the whale’s main prey, are also disappearing. In an area heavily reliant on tourism and fishing, an impending collapse of the two species has led to feuding over how to stave off an ecological disaster.

“Shutting us down to create more prey for them is not going to do anything for their diet,” said Chamberland. After the news broke, he began receiving panicked calls from clients, looking to cancel trips planned months in advance. Shock quickly gave way to frustration for the young business owner. “I think it’s really scary that we are the target,” he said of the closures.

...“We have an obligation both legally and from a moral perspective, from the context of sustaining biodiversity, to do what we can to protect and recover these whales,” the federal fisheries minister, Jonathan Wilkinson, told the Guardian. “The decline of biodiversity around the world we’re seeing is extremely sobering.”

Coming from this government, that concern rings hollow. DFO is not going to shut down either the pillaging of roe herring or the dwindling salmon stocks. Worse yet, Justin will brook no opposition to his plan to sail an armada of heavily laden bitumen tankers through the waters frequented by both resident and transient Orca.

What we're witnessing first hand is the same human predation that has caused the global population of wildlife to shrink by more than half since the 1970s. We're destroying their habitat, fracturing delicate food chains, a process that claims its victims all the way up the food chain.

We've got the very worst form of government in the wheelhouse, the neoliberals, Conservative or Liberal. Whether it's their obsequious obedience to Big Oil or the predation of our endangered wildlife and biodiversity, business trumps the environment and the Canadian people every time.

Trudeau may like to pose for photos in a canoe, adorned in his father's famous buckskin jacket, but that's as close to Pierre Trudeau as he's going to get. Liberals need to come to grips with what they're really got. Author Donald Gutstein recently compared father and son.

When Trudeau the elder created Petro-Canada and introduced the National Energy Program, Keynesianism still reigned supreme. Government intervention in the economy was legitimate. By the time of Trudeau the younger, neoliberalism had transformed economic and political thinking, decreeing that only the market can make decisions.

Make no mistake about it. This is what you'll be endorsing when you go to the polls next year. The only option Trudeau will have on offer is to choose the lesser of two evils - him or Scheer. "Better than the other guy" has become pretty thin gruel.

And what became of the floating fish farms? Still devastating the wild salmon population? Mother Nature has a lot to contend with these days!

Sarita Bay, BC & SARA & the Orca .. You nailed the basic marine biology and food chain, Mound. Some will recall the elic stonewalling of Stephen Harper via faux 'Minister of The Environment, Peter Kent.. they refused their legal mandate under SARA legislation & instead defied federal courts & fought in court yearly.. via lur taxpayer paid lawyers. Well that was boreal caribou.. and after 5 years, Kent announced that poisoning via airdropped meat baits, laced with strychnine and shooting boreal wolves from aircraft was 'regretfully' the solution.

This year's culprit to refuse their legal SARA mandate.. is .. drum roll.. Justin Trudeau and his weakass non friends of the Environment. They announced there seemed no point to emergency protection for the Southern Resident Orca pod.. best to just let them die off. and they're in the way of progress anyway.. Now that's 'nation building' Justin !

Another plan going from Big Energy for quickest review and approval via its bought and sold out Federal and Provincial regulators or Trudeau .. is a once a day exit (plus an arrival for each ship) loaded with liquified natural gas fracked in northeast BC, near the Alberta border. Two guesses how the fracked natural gas gets to the southern end of Vancouver Island. The liquefication facility and port is somewhere close to a 20 billion $ project.. that will have a useful life of approx 25 years. Who the buyers of the liquid gas might be is a mystery or big secret it seems.

President Correa of Ecuador had the right idea...kick out the foreign oil companies including Canadian Companies and return banks to the public. Trudeau is now engaging the Bank of International Settlements (BIS) which is an international financial institution owned by central banks which fosters international monetary and financial cooperation and serves as a bank for central banks which includes Merrill Lynch. Canadians need to return to the Public Banking System which happens to be the Bank of Canada. Canadians will be paying for the present 39 International Court disputes that are presently in vogue. Investor-state dispute settlement. ... ISDS is an instrument of public international law and provisions are contained in a number of bilateral investment treaties, in certain international trade treaties, such as NAFTA (chapter 11), and the proposed TPP (chapter 9) and CETA (sections 3 and 4) agreements. These people are calling the shots. Then and only then will we be able to get rid of Neo-liberalism. But, that is not our PM's desire. He prefers to continue with the former PM's direction. And what is so ironic is, Canadians don't know anything about any of this. Anyong