What If Trump's Right? 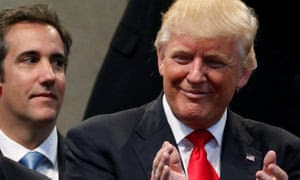 When former Trump lawyer/fixer, Michael Cohen, pleaded guilty yesterday for lying to Congress, Donald Trump pounced on Cohen saying he was lying. The deal for a mega-tower in Moscow, says Trump, was on the up and up. There was nothing to hide.

Only, if Trump is right, what are we to make of Cohen's appearance before Congress where he testified that the Russia deal was dead and buried long and yet it was still in negotiations?

Was Trump unaware of what Cohen said about Trump under oath before Congress? What are the chances of that? And, if Trump knew that Cohen's statements were perjured, why did he remain mum about it until his former sidekick's surprise guilty plea yesterday? Was he content to leave perjured statements about his dealings on the record, perhaps hoping Cohen's lies would be forgotten with the passage of time?  If he knew that his paid help was committing a crime in his name, a crime against the Congress of the United States, why did he let it stand?

Given that it was a lie told to protect Trump and his bid for the presidency, is that enough for jeopardy to attach to Trump after the fact? I realize that's iffy, but...
Posted by The Mound of Sound at 8:10 AM

Cohen's testimony before Congress was consistent with that of Eric Prince and Don Jr. It was all meant to support Agent Orange's many lies:

Prince and Don Jr are just as guilty of lying to Congress, and I hope Mueller's got them in his sights too.

Cohen testified to Meuller that:
- The Project continued into the Inauguration,
- it included a $50 million dollar bribe to Putin,
- The Insane Clown POSus was kept appraised every step of the way,

Meuller’s one of those Prosecutor’s, that doesn’t ask questions that he doesn’t already have answers and evidence for.

People forget, this is both a Criminal and National Security Investigation. What’s slowing it down is The Insane Clown POSus and his Insane Clown Posse, keep crime-ing, day after day, and all on unsecured smartphones that anybody can tap into.

The investigation, the charges, and the indictments are still coming.

And Rosenstein signed off on the process papers, so conman/fraudster Whittaker has been sidelined.

People using the meme “process crime” are trying to “win” in the Court of Public Opinion, what they keep losing in Courts of Law and the Polling Booths. That way, they can keep trying to loot the Treasury on the way out. As long as the Gullibillies, Nazis and Deplorables buy the “Process Crime” con, the ReThugs don’t have to do anything about The Insane Clown POSus or his MalAdmin.

Unfortunately, from the NRA, to Nunes, Yurtle, Granny Starver, Gym Jordan, Kennedy, Kaveneaugh, and dozens of others, the ReThugs took illegal Russian Rubles, ( some for decades), illegally, and Meuller Time is coming.

So far thats #32 ticked off the Steele Dossier as “true” and proven in court.

Former Obama CIA Director John Brennan lied to Congress about spying on Congress, while former NSA Director James Clapper lied to Congress about spying on American citizens. Yet those two arrogant anti-Trumpers were never even investigated, let alone prosecuted, and Obama didn't even fire or discipline them. And yet people take this Mueller probe about the same kind of tawdry crap that happens in Washington every single day seriously. We are indeed a nation of imbeciles.