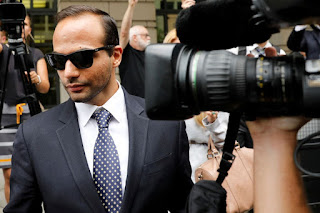 Former Trump campaign advisor turned jailbird, George Papadopoulos now contends he was set up by Australia and the UK in a plot to swing the 2016 presidential election to Hillary Clinton.  From the Sydney Morning Herald:

Since pleading guilty in court, however, a Twitter account in Papadopoulos's name has claimed that Australia was part of a conspiracy against him.

Only today the Papadopoulos account tweeted that Downer was not "repping Australia" and that "America deserves the truth."
The Greek-American energy analyst has portrayed himself as a victim and, in his counter-factual history of the Mueller probe, he is arguing that it is an Australian effort to attack a US presidential candidate, not a Russian effort to subvert US democracy.

...By Papadopoulos’ own admission, the intended audience for his some of his social media messages was Australia. In a November 4 tweet, (later deleted), Papadopoulos wrote: “Decided am going to start talking to Australia directly.”

He then made the fanciful claim that: “Alexander Downer was an errand boy for the Clinton’s," who "might have single-handedly disrupted the US-Australia relationship to safeguard his ties to the Clintons.” He also claimed the UK, Australia and the Obama administration was "running disinformation operations" against the Trump campaign.

Earlier, on September 22, he posted: “Australia, if you are listening, do not sacrafice [sic] and damage your relationship with the USA to protect Alexander Downer. He sold you out for the sole purpose to try and sabotage Donald Trump to keep his links to the Clintons alive and well."

...Papadopoulos’ social media effort appears to be, among other things, a crack at reshaping perceptions within Australia about Downer, Western intelligence and the Mueller probe, while potentially sowing distrust between Australia and its traditional allies.

Papadopoulos’ counter-narratives underscore how easy it is to bring misinformation, disinformation, conspiracy theory into the public sphere in part because social media platforms allow for disinformation to be shared and spread easily.

Partially, also, the human mind welcomes information - even if false - that reaffirms biases, an issue relevant to understanding the spread of propaganda online.

...Fred P. Hoffman, former US intelligence officer with experience in information operations, described Papadopoulos’ campaign as appearing “to be an individual effort at disinformation."

A Gofundme account bearing Papadopoulos's name and photograph is even looking for donations to support his cause.

The conspiratorial claims by Papadopoulos would be simply unusual if they didn’t follow a pattern seen elsewhere involving public figures, Russia, social media, and a counter-narrative of events. These efforts too often involve online fundraising.

Russia has also sought to sow divisions between Western allies, such as the Five Eyes alliance, for decades.

... Keir Giles, a fellow at the London-based Chatham House, described Papadopoulos's recent effort “in the same vein but less competent and less effective,” than Butina, Snowden or Assange.

“He looks like another individual that in a former, pre-Twitter age would have been found in the park shouting his conspiracy theories at the pigeons,” said Giles.

Nevertheless, as seen with the use of conspiracy theory around the Skripal poisonings, Seth Rich’s death, or Q-Anon, poor logical consistency is no barrier to their spread.

Often, all that’s needed to fuel disinformation online is for a compelling idea to be inserted into the fertile ground of an audience willing to believe it.

.. Papadopoulos has always seemed like just another delusional, diseased Trump World loser who's .. or was.. getting rich.. there seems no shortage of such.. from the dotage Donald, his offspring, enablers, defenders, co-conspirators and fuckery fellow fan club.. but some would seem will end up in prison.. and some will be 'too big to lock up' (Kushner or Donald Jr etc.. Lots of legal 'horse trading' yet to come.. among the lawyers, prosecutors.. jailers, historians .. Russians, Saudis etc..

Popadopalous’s new lawyers are trying to keep him from going to jail on Monday by arguing he’s been punished enough and properly expressed contrition in his guilty plea.

Meuller’s team is arguing for prompt jailing using Popadopalous’s own actions against him.


Sal, Jay, no argument there. This guy does seem to be a dolt. I've been wondering, almost since his guilty plea deal was announced, whether Team Trump would go after him with thumbscrews.

He's strange. After entering his plea, he tried to withdraw it. Now he's claiming he was set up by the UK and Australia in a devious plot to use him to clear the way for Hillary Clinton. Unless I'm mistaken, the election was over a good while before his name even surfaced. If it was a foreign plot, it was horribly bungled by the Brits and Aussies. They must have been more incompetent than Papadopolous himself and that's wildly incompetent.

His family report’s that his “Italian” wife is an active Russian Agent, manipulative and abusive.

They’ve gone from trolling the Insane Clown POSus for a pardon, (LMFAO) on Faux News and twitter, back to spreading Russian disinfo to the Deplorables and Gullabillies.

BTW, the head of the GRU died, after a “long illness”. Novichuk is such a bitch to handle safely.