National Populism is "Unstoppable" - The Guardian 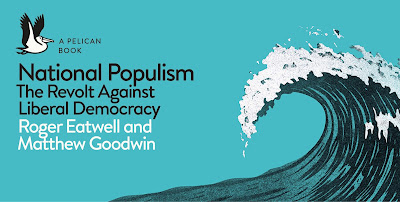 Bad news, democracy fans. National populism may be in your future and it may have less to do with globalization, inequality, or migration than you imagine. Think tribal.

The left has always struggled to make sense of national populism which seeks to prioritise the culture and interests of the nation, and promises to give voice to a people who feel that they have been neglected, even held in contempt, by distant and sometimes corrupt or self-serving elites. And today’s thinkers, writers and groups on the left have subscribed to a number of theories, all of which are incorrect. They claim this volatility is simply a shortlived backlash against something – whether immigrants or “the system” – rather than a positive vote for what national populists are offering, not only more restrictive immigration policies but also a more responsive political system and more equal economic settlement.

Another misconception, building on Marx, is that the likes of Donald Trump, Marine Le Pen or Matteo Salvini are driven by people’s concerns about economic scarcity, competition over wages or jobs, and, particularly today, by the effects of the post-2008 financial crisis and austerity. A third is the mistaken belief that all these awkward and troubling movements are essentially a reflection of lingering racism in society, and perhaps even latent public support for fascism. Others argue, again wrongly, that voters are being ruthlessly manipulated into voting for the populists by dark and shadowy right-wingers who control the media or big tech.

...The idea that Brexit can be explained away via references to big tech firms, that Trump is merely a byproduct of racism, or that the dramatic political shifts in Europe can be resolved by redistribution and tackling inequality, are mere comfort blankets. What we need to focus on instead is how in most western democracies the rise of national populism has coincided with the fall of social democracy. National populism has recognised how the foundations of politics are moving while the left, for the most part, has clung to outdated theories.

... So what is really going on? National populism is revolving around four deep-rooted societal shifts: the “four Ds”. First, there are high levels of political distrust, which are being exacerbated by populist leaders who paint themselves and their followers as victims of a political system that has become less representative of key groups. Second, many people have strong and entrenched fears about the perceived destruction of national cultures, ways of life and values, amid unprecedented and rapid rates of immigration and ethnic change. Accompanying this distrust and fear are anxieties related to deprivation and the loss of jobs and income, along with a strong sense that they and their ethnic and social group are being left behind relative to others in society.

Finally, many political systems in the west are having to grapple with a new era of dealignment, in which bonds between voters and traditional parties are breaking down, and hence the path for new political challengers is much more open.

When you take a closer look at these four currents it becomes abundantly clear that there is nothing ephemeral about national populism, and we will be living in an era of heightened volatility for many years to come.

If that has soaked in let's go back a year to when our prime minister declared Canada a "post-national state" that had no cultural mainstream, no core identity. Not only is Trudeau a neoliberal up to his eyeballs but he saw fit to proclaim Canada no longer a nation state. What, based on getting just shy of two out of five voters in 2015, His Majesty up and pronounces the Canadian nation-state dead? Then he applauds politely when Morneau tells the plebs they had better get used to the idea of a life of "job churn."

How many of the "four Ds" does Justin Trudeau ring? Why, all four. Political distrust - look at the whoppers he told to trick us into voting for him. Destruction of national cultures, ways of life and values - he checks that box. Anxieties related to job and income insecurity - that's exactly what Morneau said is in store for the Canadian rank and file.

When it comes to defending liberal democracy in Canada, the Conservatives are worse but the Liberals are still terrible. And, so long as we have those two rotten alternatives, national populism may well lie in our not distant future.

It's not all doom and gloom. You don't have to be consigned to some rightwing authoritarian future. There is a cure. It's called "progressive democracy" and the basis for it is right here if you want to read it.
Posted by The Mound of Sound at 11:12 AM

On the first day after the midterms, Trump held a rambling press conference in which he acted as if he was drugs. (Nothing particularly uniques about that ...) Then he fired Jeff sessions and appointed an unqualified toady who auditioned for him on CNN by trashing the Mueller investigation as the Attorney general of the United States.

And later that night his press secretary banned a White House reporter and tweeted out an Alex Jones doctored video to justify it.

And it's still only Thursday.


The point is, Jay, what must we do to ensure we don't slide into that same political bilge?

Make sure we don't have Faux News, Sinclairs, kill the Rebel even more,

Other than losing the war, and the economic situation, the 4 keys to the Nazis rise in Germany were:

- tag teaming with the Leftier Than Thou Communists and Socialists to weaken and bring down the "centerist" Social Democrat Parties,

In Hungary, Urban started his rise to power by striking deals with the Ogliarchy. They would buy up 90% of the Media, and "Faux News" the Hell out of Hungary, and once in power, he would let them loot the country for a share of the profits.

Studies in the US show that 80% of the time, you can turn your racist, angry, fear ridden, bigotted, Insane Clown POSus loving grandparent into a kind, sane, reasonable person, in as little as 30 days, by enabling the parental controls on the TV and blocking Faux News, doing the same with online access, and killing AM Radio reception.

We need to reclaim First Estate protections, establish punitive "fire walls" legislatively between the First Estate and Infotainment, update libel and other "prohibited speech laws" to adapt to both the web, trolls and actual "fake news" purveyors, and restrict web access to Canada to the Corporations like The Book of Faces, Instacrap and Twitler, that don't police their sites to prevent those actions.

The loophole of "we are just a content carrier or search engine", not a publisher, promoter or media source needs to be closed.


Good suggestions, Jay. How do we create public support for such change? If the public remains complacent, what then? Will the country sleep walk into national populism?

When a bunch of people believe that Climate Change is "God's Will" how in hell can we implement the above good suggestion? With "Great Difficulty". Anyong

A simple majority is all that is needed to restore the old "Fair Media" Laws, update the slander, hate and libel laws to include the web, and add new laws to target foreign purveyors.

The Rebel hatefest and it's commenter's and contributors have lost lawsuit after lawsuit, but the consequences which would have been severe back in the '50's, when the laws and penalties were last updated, are a joke today.

In contrast, Gawker Media lost a $140 million dollar lawsuit against Hulk Hogan, ( who was deliberately bankrolled by vampire bloodsucker/Prince Prospero Climate Denialist Peter Thiel, to destroy Gawker Media and drive fear into the hearts of other Media)*, settled for $31 million and bankruptcy, for publishing part of a sex tape.

If a "media" outlet publishes "fake news", to stay in business, they should have to publish a full retraction, on the "front page", and keep it up for a week. No retraction, heavy CRTC fines, shutting them down, Civil lawsuits by the "wronged" Party.

A Google search on Climate Change should list all actual Science results, no denialism, same for vaccination, etc. Fines or denial of service if they don't.

Commenters should be held liable as well. 99% of CBC "comments" are a cesspool and they are a lot better than say, The Sun.

"News" stories should be regulated. A story on say, possibility of an asteroid strike should only feature scientists who are experts on asteroids and the aftermath of a strike. It shouldn't be "allowed" to have Neil deGreasse Tyson in one corner saying we are due, and a Flat Earther in the other corner, just for clicks, eyeballs and ad revinue.

One of the key problems is that like targetted infometrics, Politicians and the CRTC are 30 years behind the times when it comes to the digital age. They understand that "The Protocols of the Elders of Zion" is anyisemetic hate, they don't understand Soro'sCT, "rootless cosmopolitan", "globalist", ((( -----))), are as well.

Unimpressed by the article. It pretends to dig deeper than others, then represent effects as causes. Is distrust supposed to have arisen spontaneously? No. Distrust is caused by untrustworthy behaviour on the part of politicians--lies, failure to fulfil promises and so forth. But what causes those behaviours? The fact that they are beholden to elite interests rather than the voter, and so must deliver policy for those interests while giving lip service to the voter. And why are they beholden to those interests? Because inequality is high and so those at the top have greater capacity to determine political success, or to reward loyal politicians even if they fail with the voters.
Thus it is high inequality which drives distrust. Distrust is a dependent variable, not an explanation.