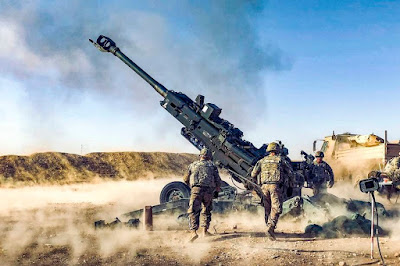 Donald Trump can't stop bleating how much he loves America's military. Odd how he doesn't want to do anything about one of the greatest threats to US military readiness.

The Pulitzer prize-winning website, Inside Climate News, has launched a new series entitled, "Dangers Without Borders," that explores how climate change is degrading America's military capabilities.

According to a recent bipartisan expert report to Congress, the U.S. military has been so weakened in recent years that it now runs the risk of losing a war to China or Russia.

One of the most tangible effects of climate change on the U.S. military can be seen after extreme weather batters its equipment and installations, calling into question whether military units can be deployed quickly and effectively if conflicts were to flare.

...Even as climate change starts to threaten military bases and infrastructure, it simultaneously worsens tensions abroad that could draw in American forces. National security officials have described global warming as a threat multiplier—the extra stress from a drought or typhoon that could push an already weak foreign land into chaos and send gusts of mass migration or terrorism through regions and even continents.

In a 2015 report to Congress, the Pentagon pointed to the Syrian civil war as an example of how climate change can aggravate the fragility of a nation already riddled with tensions and poor governance. At the time of the Arab Spring in 2010, Syria was already under great stress. The authoritarian regime of Bashar al-Assad was unpopular, and an influx of more than one million Iraqi refugees strained basic services.

At the same time, the worst drought in 500 years had shriveled large swaths of rural Syria, a country long plagued by water scarcity. Thousands of Syrians moved from farms into towns and cities. The migration contributed to the instability, which erupted into popular uprisings and, eventually, a cataclysmic civil war. Hundreds of thousands of people died and waves of refugees moved through the Middle East and into Europe and shook the political order as far as Germany. Today, more than 2,000 U.S. troops are fighting in Syria and northern Iraq, with the end of American involvement still unclear.

National security experts who understand how climate change moves a nation from bad to worse are asking, where is the next Syria? Will desertification in parts of Africa rob people of their farms and make some of them susceptible to the call of extremist groups? Will Pakistan's habitually beleaguered government be able to take care of its people if catastrophic flooding strikes, as it did in 2010, when American troops responded? And will the U.S. military, if called upon, be able to respond to international crises if climate change has hammered its ships, planes and training grounds?


Compounding the threats - the Trump factor.

At the same time, the White House denies mainstream climate science, halted work across federal agencies on climate change, and pulled the country out of the Paris climate accord as part of the broader collapse of American climate diplomacy. Trump rescinded an executive orderthat called in part for supplying the national intelligence community with the latest climate science, an Obama-era directive meant to help analysts better monitor the impact of warming on potential global hotspots. He also stripped mention of climate change as a threat to global security in his first National Security Strategy document issued in late 2017.

If America's adversaries and rivals want to find some means to degrade the US military, they couldn't have a better ally than Donald J. Trump.
Posted by The Mound of Sound at 12:47 PM

I think the American military, while they know climate change is real, see it as a major opportunity to increase their budgets and power still further.


That's a very plausible argument, PLG. It will be fascinating to watch as the military/climate change issue unfolds.