We've Got a Neoliberalism Problem and It Will Control Us If We Don't Tame It. 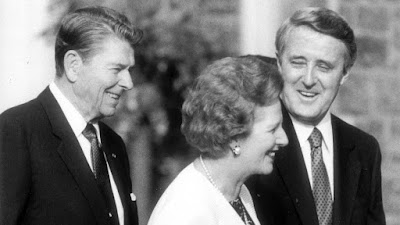 When Thatcher, Reagan and Mulroney coaxed us to board the neoliberal train, very few of us realized it would carry us to authoritarianism, inequality and perhaps even fascism. Yet as years turned into decades we sat by and watched progressive liberal democracy wither, our national sovereignty wane and our once robust and broadbased middle class gradually displaced by the ascendancy of the precariat and the reality of job churn as the state turned toward corporatism and turned its back on the public interest.


Neoliberalism as economic theory was always an absurdity. It had as much validity as past ruling ideologies such as the divine right of kings and fascism’s belief in the Übermensch. None of its vaunted promises were even remotely possible. Concentrating wealth in the hands of a global oligarchic elite—eight families now hold as much wealth as 50 percent of the world’s population—while demolishing government controls and regulations always creates massive income inequality and monopoly power, fuels political extremism and destroys democracy. You do not need to slog through the 577 pages of Thomas Piketty’s “Capital in the Twenty-First Century” to figure this out. But economic rationality was never the point. The point was the restoration of class power.

...“It’s important to recognize the class origins of this project, which occurred in the 1970s when the capitalist class was in a great deal of difficulty, workers were well organized and were beginning to push back,” said David Harvey, the author of “A Brief History of Neoliberalism,” when we spoke in New York. “Like any ruling class, they needed ruling ideas. So, the ruling ideas were that freedom of the market, privatization, entrepreneurialism of the self, individual liberty and all the rest of it should be the ruling ideas of a new social order, and that was the order that got implemented in the 1980s and 1990s.”

“As a political project, it was very savvy,” he said. “It got a great deal of popular consent because it was talking about individual liberty and freedom, freedom of choice. When they talked about freedom, it was freedom of the market. The neoliberal project said to the ’68 generation, ‘OK, you want liberty and freedom? That’s what the student movement was about. We’re going to give it to you, but it’s going to be freedom of the market. The other thing you’re after is social justice—forget it. So, we’ll give you individual liberty, but you forget the social justice. Don’t organize.’ The attempt was to dismantle those institutions, which were those collective institutions of the working class, particularly the unions and bit by bit those political parties that stood for some sort of concern for the well-being of the masses.”

...Neoliberalism generates little wealth. Rather, it redistributes it upward into the hands of the ruling elites. Harvey calls this “accumulation by dispossession.”

“The main argument of accumulation by dispossession rests on the idea that when people run out of the capacity to make things or provide services, they set up a system that extracts wealth from other people,” Harvey said. “That extraction then becomes the center of their activities. One of the ways in which that extraction can occur is by creating new commodity markets where there were none before. For instance, when I was younger, higher education in Europe was essentially a public good. Increasingly [this and other services] have become a private activity. Health service. Many of these areas which you would consider not to be commodities in the ordinary sense become commodities. Housing for the lower-income population was often seen as a social obligation. Now everything has to go through the market. You impose a market logic on areas that shouldn’t be open to market.”

...Under neoliberalism, the process of “accumulation by dispossession” is accompanied by financialization.

“Deregulation allowed the financial system to become one of the main centers of redistributive activity through speculation, predation, fraud, and thievery,” Harvey writes in his book, perhaps the best and most concise account of the history of neoliberalism. “Stock promotions, ponzi schemes, structured asset destruction through inflation, asset stripping through mergers and acquisitions, the promotion of levels of debt incumbency that reduce whole populations even in the advanced capitalist countries to debt peonage. To say nothing of corporate fraud, dispossession of assets, the raiding of pension funds, their decimation by stock, and corporate collapses by credit and stock manipulations, all of these became central features of the capitalist financial system.”

Neoliberalism, wielding tremendous financial power, is able to manufacture economic crises to depress the value of assets and then seize them.

...Neoliberalism transforms freedom for the many into freedom for the few. Its logical result is neofascism. Neofascism abolishes civil liberties in the name of national security and brands whole groups as traitors and enemies of the people. It is the militarized instrument used by the ruling elites to maintain control, divide and tear apart the society and further accelerate pillage and social inequality. The ruling ideology, no longer credible, is replaced with the jackboot.

Deregulate the financial system - what could possibly go wrong?

Deregulate the financial system....no it won't work. Get rid of the companies that are causing this in the first place...clean it out. Anyong

Finance has gone through a process of major deregulation since the 1970’s with a small amount of re-regulation every time they blow up the economy, sometimes the world economy.

.. last I looked, I reside in Canada eh.. have a valid passport, driver's license, a bank acoount and a single credit card for travel emergencies. Much as I vaguely understand the Brexit contretemps, am outraged (as any North American should be) by the sheer geopolitical idiocy of Donald Trump.. and his assault on our shared environment.. and am astonished by MSB and the rest of the Saudi 'royalty... Its Canada, and Ontario I must pay attention to.

We can probably clean up a decent part of neoliberalism vis a vis Canada with two simple initial steps. I mentioned these to Lorne this ayem.. and it requires getting our so called 'public servants' fitted for choke chains. Yes, there are certain realities to controlling public servants.. they are not 'royalty' - they are elected, riding to riding to represent our dreams, needs and wishes.. certainly not to throw their personal ideologies, dogma or financial gain in our faces.. irresponsibly. Nor are they to be tolerated for dickflopping on social media or spending or wasting shocking amounts of taxpayer dollars on ancient pipelines, military hardware or subsidizing the wlite wealthy.. or telling us their bright little bo peep impressions via their tarnished school curriculum.

Hold my beer.. I'm getting to the point.

Premise Number One - There shalt not be political party whips. We don't allow such nonsensical roles in Public Service.. so why accept it within our Parliamenrs or governments ?

Premise Number Two - There shalt be no Majority Government - In today's day and age, that's proven to be a complete failure. Its legalizing political abuse & negligence. Its a Pandora's Box when combined with 'captured government' wherein Public Service becomes lip service and a circle jerk by partisans. There are ways to ensure legitimate progress is made by 'minority government' and it must be governed rationally, not by some sort of archaic monarchist kabuki theatre of the absurd.

I don't truly care id a certain population in Saskatchewan elects Andrew Scheer.. but I sure as fluck do not want him 'running the country' ! I also do not want Jason Kenney 'running' Alberta.. nor do I want Justin Trudeau deciding the southern resident Orca pod is a lost cause.. because he aint got the smarts to inderstand they eat wild salmon. Tony Clement needs to GO.. with cause.. he's an insult to his riding electorate and citizenry.. so somebody tell him to flock off, take his stinkin pension and vacate. The complete absence of legitimate 'Public Service' by MP's or MPP's etc truly bothers me.. No I meant to say it truly inflames me. If I had been an Alberta resident during ms Redford's reign.. I would have left the province. Here in Ontariario we have a slug named Ford decreeing the Child Advocacy Watchdog and Ofiice shall be terminated and dumped temporarily into the Ontario Ombudsman's lap.. Pro Tip ? Dough Ford is currently disembowling the Ontario Ombudsman's office.. Seems he sees these budget 'efficiencies' as 'public service' ..