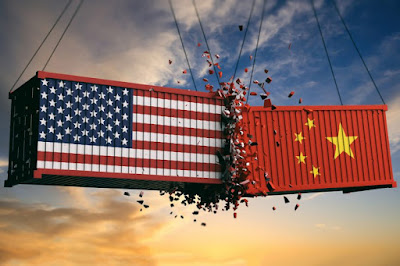 China's economic prowess is just part of its rivalry with the United States. This is a standard part of an ascending power taking its rightful place alongside a once-dominant power.

“China can only conclude that the U.S. is in long-term decline as President [Donald] Trump actively undermines the liberal international order with his tariffs on allies as well as adversaries, contempt for multilateral institutions and belligerent tweets … [China is] betting on American political decay … We believe China will test America’s pain threshold with the belief that U.S. politicians are beholden to interest groups (farmers, retail industry, corporations).”

Mr. Yu sees the economic pain from an extended trade war as more or less evenly distributed, with the two-sided imposition of tariffs “not punches thrown at the other boxer but head butts which hurt both sides equally.”

Citi economist Willem Buiter described similar concerns about U.S. politics in “How to Think about Political Risk and the Economy,”

“Policy uncertainty affecting trade, sanctions, regulation, diplomatic norms, and the strength and independence of institutions is the greater risk going forward. The obstacles to appropriate countercyclical [stimulative] policy when global recession threatens are likely to stem from weak political capacity and will, owing to political fragmentation.”


There were signs of institutional failure ...almost a year ago – political extremism, pathetically low approval ratings for U.S. congress, and an anti-vaccination movement that showed disdain for medical experts – but there was no clear battleground to test the relative strength of western democracies.

Trade negotiations might be providing the arena that was missing. A deal that cools tensions could, of course, be signed at any point but Mr. Yu believes, “Even if a deal is signed next week, it is now clear to us that the China-U.S. relationship will be fraught for decades to come.”

Tariffs on Chinese crap is probably a good thing. I try not to buy it if possible. Reduce plastic junk, reduce ocean shipping and encourage production in North America at the same time.


This post really isn't about the merits of tariffs, Hugh, especially not when capriciously imposed by a jackass like Trump. It is about how tariffs are just one of many impacts of the shifting geopolitical standing of China and the US.

Beijing's Belt and Road initiative has caught Washington off balance. In 2007 I did a post on the creation of AfriKom, a Pentagon division focused on what had, to that point, been the neglected continent of Africa. The US tried to pitch AfriCom as a humanitarian effort, a cheap guise that fell apart within its first year.

Then, in 2018, Bolton informed the world that the Monroe Doctrine was being re-introduced, a warning for foreign interests (i.e. China) to stay the hell out of South and Central America. Despite American bluster, the largest two foreign banks in Latin America are Chinese.

I periodically read the latest Proceedings of the US Naval Institute. A while ago I stumbled upon an opinion piece written by a serving officer lamenting that the US was being overtaken by China "without a fight."

Which takes us back to the Project for the New American Century (PNAC) and the Bush Doctrine that served notice the US would not tolerate a rival - economic or military - and reserved the right to use pre-emptive military force against any country that tried to match the US.

Meanwhile there have been credible reports out of both Chinese and American sources that China's military leaders are still out for revenge for their nation's "Century of Humiliation" at the hands of Western nations. It's all rooted in the situation four centuries ago when India and China were the world's largest economies until they were conquered by white folks looking to take those top spots.

" It's all rooted in the situation four centuries ago when India and China were the world's largest economies until they were conquered by white folks looking to take those top spots."
Now there's a nugget on colonialism!
An even longer historical lens on the issue of foreign trade and balance of payments shows that most of the silver coins minted in the Roman Empire ended up (reminted) in China.

You all seem to be forgetting that we Western white folk made China what it is today. Now that China has progressed to the point they do not need our greedy companies producing our garbage in China, we don't like it. How many North American white people made it big through investing on the backs of the Chinese? You Mound? People you know and hang around with? I remember people calling the Chinese "stupid". Not so stupid now though especially when there are people around like Trump. Too much money seems to make dunces out of the population.

re..
Tariffs on Chinese crap is probably a good thing. I try not to buy it if possible..
The Chinese are as capable of quality manufacturing as anyone.
It is the western retailers that set the manufacturing standards/price of the imports therefore we get what we pay for?
If we reverse the statement to..
USA crap as in Boeing 737 max I think it has more bite!