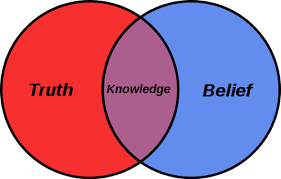 This being the Sabbath and all I thought it a good time to consider the idea of truth and what it means to us, to me and to you.

As far as I can tell there are two main types of truth, one that is becoming vastly more popular than the other. There is truth founded on belief. That's the sort of truth you'll find preached in pews wherever Christians gather today. It's a lot like the truth our Jewish brethren exchanged yesterday and the children of Islam delved into on Friday. When it is embellished with religious overtones we call it "faith." 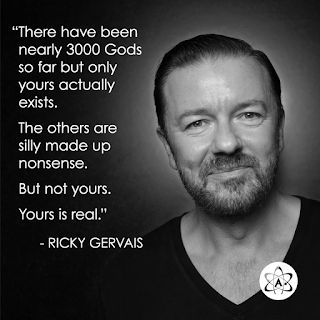 'Truth' founded on belief is a lot more prevalent than you might imagine. It has a vast secular dimension.  As John Ralston Saul observes in his book on globalism, all ideologies, economic or political, are belief-based. He devotes several pages documenting how economic models, at least historically, have lasted on average about 30 years before they're replaced by the next great thing which we believe to be more sound or convenient, a correction to our former flawed notions. Political ideology is likewise a belief-based construct. Communism, socialism, social democracy, capitalist democracy, oligarchy, plutocracy - they're belief based and, perhaps with a bit of occasional blood-letting here and there, interchangeable.

The other side, fact-based truth, that's in trouble. It impedes things like unfettered commerce. Ask Monsanto or Exxon. The last thing they want to do is confront facts, particularly scientific fact. Not for nothing do they attack science as a modern "religion." It may not cut much ice with the scientific community or those who prefer fact-based truth but that doesn't matter. It works just fine with their target audience - those who need to believe and will reject what Al Gore called the "inconvenient (fact-based) truth."

This leads to the now predictable faith-based response to fact-based truth, usually in the form of attacks on Gore for the size of his house, Suzuki for the number of his children or scientists generally for their massive (five figure) salaries. It becomes like a mantra, more compelling with each additional chanter. It's a bit like a quasi-hypnotic reaction, a mass psychosis.

Our political leadership has become disturbingly belief-based. Our current prime minister solemnly pledged that his government would follow the science. He left out the part about 'how far' because the honest answer would be 'not very.' His mandate letters to his ministers made each and every one a vassal to the nation's economy and his neoliberal vision of what that should be.

Mr. Trudeau is a disciple to the cult of perpetual exponential growth. It's entirely belief-based given the premise that our economy can continue to grow, steadily ever faster, endlessly on a planet that is decidedly finite, not growing, not a bit. If anything, our rapidly metastasizing human civilization is shrinking, as in degrading, the planet's ecosystem. Earth's carrying capacity is no longer what it historically was. Doesn't sound like someone is 'following the science.'

Like all cults, the neoliberal order and its High Priests ignore whatever doesn't suit their belief-construct. They still chase a toxic growth paradigm even though the Earth's envrionment, its biosphere is already reeling.

Neoliberalism's cult needs a collaborator to spread the news. Enter the mainstream media. This bit posted to Facebook gives you the idea: 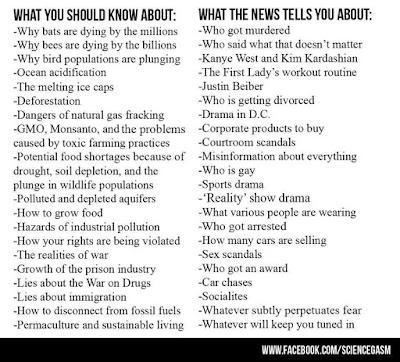 Like it or not, we're at a moment when we need a lot more fact-based truth and not so much faith-based 'truth' whether that's religious, political or economic belief. One and only one of them leads us to a future. The other only leads us to Armageddon, extinction.

We're coming to a point where we need solid, fact-based leadership. We're in a jam. It's man-made. A lot of this mess traces straight back into belief-based thinking, really messed up ideas that flew in the face of knowledge, fact and truth. It worked, or so it seemed, for a few decades but it's not working any more. The economic model we continue to cling to has outlived its utility. It's not working for us any longer. It's working against us, driving critical resource exhaustion, climate change and the looming collapse of biodiversity. Now, more than ever, we need leaders clear-headed enough to try to steer us in another direction.

.. count me among the agnostic adult cynics.. who once were kind of stuffed into the Latin memorizing altar boy ranks of the vaunted Catholic Church - I am comfortably now among those who believe fiction is far stranger than fact.. (though not always...)

Thus.. I do not seek altruism in a brothel or a strip club.. though I likely would find naked truth there.. very... - and basic economics and sound business ethic at work. Fundamental supply & demand 24/7 & alcohol

Turning my cheek(s) from that environment, I could seek same within the welcoming portals of OUR major centers of 'situational ethics' - the tawdry political parties - which are really just old boys clubs where different levels of prostitution are freely supplied - at a cost.. and truth and reality or altruism are scarce commodities within those grungy walls

Looking to the world of high finance & stock markets.. I see fiction & fantasy on display.. and greed - the grifting is constant.

However.. I always find TRUTH in the natural world.. or the wonder of a tiny child. A raindrop amazes me, or a tiny toad. An open field teaches me history, as will a stone fence.. or a swirling wind dancing the leaves of a tree. Nature is Truth - to me and so is a piano note or an old woman humming to her grandchild. I love to touch a bumblebee.. do I touch money the same amazed way ? Haha.. that is to laugh, of course not.. Would I find these truths or wonder in the convoluted cardboard of MainMedia - NO.. Yet I find truth in the simple clean ethics, questions and concerns of most Indy Media that I trust

That graphic you included really says it for me. I will read the words of a great Canadian like David Schindler or Michael Harris several times.. savoring the specialness & I give not a fluck whether Kanye West or Drake has purchased a Boeing 747 or a spaceship. Truth and Reality slap me in the head & sustain me.. tell me to be REAL.. the rest is Noise, flavor of the day.. damn but it seems so obvious

I think Mound that you went to the deep end of the semantics pool.
For starters, there is no such thing as "belief based truth."
Secondly, knowledge is not a product of belief and truth.
Thirdly, do not confuse personal perception with the objective truth which is based on observable and verifiable facts.
According to the oracle called JT: "A man experiences an interaction as benign or not inappropriate and a woman, particularly in a professional context, can experience it differently," but the fact is that he touched/groped that woman.
Fourthly, a "faith-based response" has nothing to do with the facts that, together, Gore & Suzuki own 5+ properties and have 9 children. The fact is that having children, save for having the lifestyle of an oligarch or sheikh, is the most destructive thing one can do for the environment.
Fifthly, I think that the above mentioned village idiot JT, while being an idiot, is well aware that time is running out of current globalist based continuous growth economic model, but he wants to have a second/third/ etc. term in the office first.
Finally, we are in agreement that "we need solid, fact-based leadership." I am not sure though that most people would like to know/care about certain facts and their consequences.

I don't think most ideologies can really be characterized as "true" or "false". It's more a matter of what values and interests they serve. So neoliberalism, for instance, is designed to give as much money to the few at the top of it as possible, as quickly as possible, discounting the future very strongly. If you're one of those few and you're willing to discount the future a lot, it's a valid (if decidedly immoral) ideology. Where the falsity comes in is the point where those few try to convince everyone else that neoliberalism is in their interests too, which it most definitely is not.
Even fascism--if you happen to be a bloodthirsty nihilistic son of a bitch who loves having people in your power to stomp on sadistically as much as you love groveling to those who have power over you, then fascism is the ideology which will make you the happiest. It is frightening how many people seem to answer to that description when the chips are down.

Some ideologies might be considered false in the sense that not only the people who believe in them, but even their core theorists, seem to be flat wrong about the ideology's implications if put into practice. I consider libertarianism to be like that--its proponents have an attachment to a certain approach to life and so tell themselves that everything would be just lovely if that approach were universal, but it totally wouldn't work the way they think it would. Most libertarians would probably be horrified with what actually happened when they instituted libertarianism. They're thinking peaceful utopia maximizing productivity, I'm thinking Mad Max Beyond Thunderdome.

Then you get into various strands of socialism, social anarchism, anarcho-syndicalism and whatnot. The ethic they all have in common is the desire to benefit the many, not the few (in this day and age, that forces them to be environmentalist, because you can't benefit the majority on a destroyed planet). Most of the variants are likely to be less than 100% successful at this if brought to reality. Many a slip and all that. But at least they're aiming in a good direction.

Whichever one you back, I don't see a case for claiming they're all somehow the same.