It's that Right Wing/Climate Change Thing 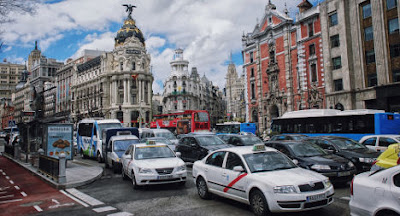 The city of Madrid has made impressive strides in establishing an urban low-emissions zone.  The incoming, right wing government, wants to erase that progress to bring back the good old days of gridlock and vehicle exhausts.


Madrid may be about to become the first European city to scrap a major urban low-emissions zone after regional polls left a rightwing politician who views 3am traffic jams as part of the city’s cultural identity on the cusp of power.

Isabel Díaz Ayuso, who is expected to become the new Popular party (PP) president of the Madrid region, believes night-time congestion makes the city special and has pledged to reverse a project known as Madrid Central, which has dramatically cut urban pollution.

...An estimated 30,000 Spaniards die each year due to air pollution, according to the European Environment Agency.

Within a month of its launch last November, Madrid Central had cut urban traffic by up to 24% and nitrogen oxide (NOx) levels by 38%. CO2 emissions also fell by 14%.

...During the election campaign, Ayuso told El Pais: “I do not think [traffic jams] are a reason for enjoyment but it is a sign [of the] identity of our city, that the street is always alive.”

Congestion is “part of the life in Madrid”, she said, adding that the city’s nightlife “goes hand in hand with traffic jams”.

No good deed goes unpunished. Sheerly-not knows that a government with any progressive climate policy, no matter how mild . has made itself vulnerable to an uninterested voting public . It has happened in Ontario, New Brunswick and Alberta and federal climate action has given Sheer-nonsense ammunition.

I'm now certain that stupidity is a virus.


Another reminder that we're a desperately fucked up species.

I guess that empty streets were scaring away he tourists. Well, welcome back to the show. We’ve got so much vibrancy and dynamism happening that you’ll never hear the coughs and sounds of choking. Now we can go to work on increasing the number and improving the quality of barfights.


I believe they're already outsourced the barfight franchise to Benidorm.

In the scientific community it has been known for more than three decades, that a low level but LONG term pollution (especially in the cities), is the #1 health problem worldwide.


Anon, you plainly didn't get the message. 'Don't worry, be happy.'