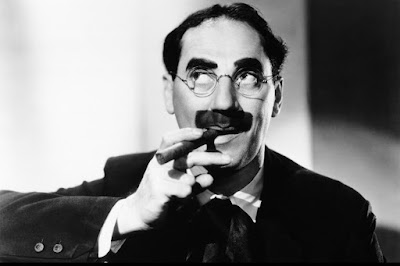 Groucho Marx once quipped, "Those are my principles and, if you don't like them, well, I have others."

That came to mind as I read the NDP's Environmental Election Epiphany announced today by leader, Jagmeet Singh. It's pretty pedestrian stuff just perfect for an election campaign.

A skeptic might say that Jagmeet, his party languishing in the polls, his own leadership in doubt, and an election looming, is desperate to staunch support bleeding away to the Greens. What better way than to follow the path charted by Layton and Mulcair and go 'full chameleon.' Those guys showed the NDP could abandon the left, shift to the centre and transform into Latter Day Liberals when it seemed they had a shot at the brass ring.

This time around no one has any illusion of the NDP forming government. Not a hope in Hell. So, best to try something else such as thwarting the Greens by aping the Greens. Nice one, Jag.

There's no way Jag is going to appeal to any eco-converts from the Conservative or Liberal ranks. Those votes, if there are any, will go to May's Greens. He won't be winning any Green converts either. What remains? That would be NDP votes defecting to the Greens.

On-topic: the NDP is in flux. It needs to rebuild. Rebuild its grassroots, its leadership, its philosophy. So long as it remains captured by faux-progressive sandbaggers, this probably won't happen.


Hey, Troy. Good to hear from you. The NDP does need to rebuild and that could begin by recollecting the invaluable role the party once played as the "conscience of Parliament." In that role they were a powerful voice for that strata of the population that rarely gets heard - the poor, the low-income, blue collar workers and trade unionists. Think of a party that has organized labour's back today. I can't.

That brings back memories. Parliament Hill. Some stinking hot and muggy day. The House is to convene in the afternoon to pass back to work legislation in a national rail strike.

Railway workers with protest signs million about on the lawn, some of them taking a few nips to pass the day. Tempers rising.

Then, I'd guess it was just before 1 p.m., the protesters stormed into the rotunda of the Centre Block. In those days there were just a couple of ceremonial mounties on duty,easily swept aside.

They flooded the rotunda. The library staff shuttered their heavy doors. The mob thought that was the doorway into the Commons. The crowd got progressively uglier.

Then a little guy walked in. He stood atop a chair to be seen and heard. It was David Lewis. He called for calm and assured the strikers that the NDP would fight for them that afternoon when Parliament convened.

That's all they wanted - to know that someone was listening to them, someone who believed in their right to strike.

I was lucky to be there instead of across the street in the National Press Club swilling a couple of cold ones. I was also lucky not to get my lights punched out. The mob was not media-friendly that day.

That, to me, was the NDP at its finest.

"Those are my principles and, if you don't like them, well, I have others."
Indeed.

When Jagmeet entered the fed. leadership race he was pro-TMX. (Or to be charitable, he was confused or had no real position.) That got 'fixed' as quickly as the 'bested dressed' meme worn thin. I share your skepticism on this latest tack.

Watching the Blair-Obama-Trudeau-Holland-etc-etc betrayals has driven me to look for genuine progressives with long track records- people like Jeremy Corbyn. While I do not, in general, trust the Canadian Green Parties, I do respect Lizzie for her consistency over the long term.

My friend, who still lives in Ottawa, remembers the day when Lewis pointed across the House at Pierre Elliott and bellowed, "There, but for Pierre Elliott Trudeau, goes God!" Those were different days.


David Lewis was something else, Owen. Would that we still had politicians of that caliber.

I used to think it condescending when people like, say, the Globe & Mail's editorial board said the NDP should be the conscience of Parliament. Especially since they made a point of never responding to that conscience except to criticize it as being dangerously unrealistic.

But now, regardless of who is saying it, I think a better use of the NDP's time would be to articulate ideas that while, if not widely popular, would turn out to have been right. Otherwise, all we hear is mainstream drivel and our collective intelligence shrinks.

In other news (though still related to your post) I was going to do a companion piece to a recent post about the futility of the Liberal Party, on the futility of the NDP. I might not get around to it, but, in homage to your writings of Canada as a "petro-state" I offer the following tasty morsel.

On a NDP fuckerbook board, somebody complained about Brad Lavinge's destructive influence on the NDP. I recognized the name but didn't know anything about him. So I googled him and found out this about him:

"Brad Lavigne is a political and corporate communications strategist.

In the 2015 federal general election, Lavigne was a Senior Campaign Advisor to the New Democratic Party of Canada.

Prior to this role, Brad was a Vice President with Hill+Knowlton Strategies in Ottawa. During that time he was also registered as a lobbyist in Ontario for the Canadian Fuels Associations.[1]" (emphasis added)