If You Can't Believe the World Is Massively Overcrowded


Get an eyeful of this: 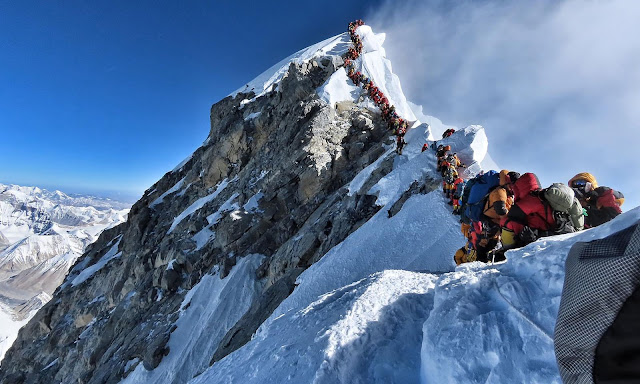 These are climbers queuing to summit the world's highest mountain, Mount Everest.


Hundreds of climbers hoping to make it to the summit of the world’s tallest mountain were forced to queue for hours in freezing temperatures at high altitude this week as congestion built up on Mount Everest.

The delays have been linked to the deaths of at least three people on the mountain, according to local media. An American man and an Indian man and a woman all died as they descended, various sources said.

Personally, I'm a believer in thinning out the world stock of nitwits, so this mob assault on Everest's peak by persons of dubious mountaineering ability is just the job. They're about as thoughtful as the "experts" who ski BC's back country and don't believe in avalanches.

That doesn’t look very safe. Considering the interest that’s been generated over this location over such a long period of time, some appropriate handrails and staging should have been put in place. Somebody should sue the parties that are making money off of this.

I think we have the technology John B., to install an elevator/tunnel inside the hill. Perhaps some of that directional drilling that's wasting away in Alberta.
Of course, that wouldn't do much toward reducing the world stock of nitwits, but it might create some temporary employment.

To answer several questions with one quote; why have we not been visited by extra-terrestrials or contacted by them and why there is a line-up to get to the top of Mt. Everest? In the immortal words of Yogi Berra, "Nobody goes there anymore. It’s too crowded."

3:29.....the answer to that question could be extra-terrestrials could be on the other side of the "big bang" and they see what we are doing ourselves and don't want anything to do with us.