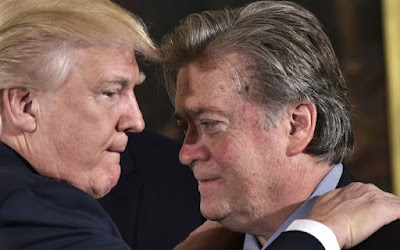 
The former White House adviser Steve Bannon has described the Trump Organization as a criminal entity and predicted that investigations into the president’s finances will lead to his political downfall, when he is revealed to be “not the billionaire he said he was, just another scumbag”.

The startling remarks are contained in Siege: Trump Under Fire, the author Michael Wolff’s forthcoming account of the second year of the Trump administration. The book, published on 4 June, is a sequel to Fire and Fury: Trump in the White House, which was a bestseller in 2018. The Guardian obtained a copy.

In a key passage, Bannon is reported as saying he believes investigations of Donald Trump’s financial history will provide proof of the underlying criminality of his eponymous company.

Unless he’s going to solely concentrate on Europe, I wonder if he has his eye on any other American scumbags as potential star performers in his next act.

Has he had his revenge and at this point does Steve just want to have fun?


I read that Bannon hasn't caught on in Europe as he had hoped. I believe he's working out of some medieval monastery.

Likely ... so far the Dems are biden-brain-dead and still chasing Russians.


Hard to say, guys. I've pre-ordered the book, Kindle version. I have a bedside Amazon Echo, the small one. I use it to get news summaries from CBC, NPR and BBC in the morning while I stir from sleep. It will also read many Kindle books, this one included. I'm not a fan of this author but his gossip is worth a giggle. I think I'll let Alexa digest it a few pages at a time.

As long Bibi (or his successor) and, to a lesser extent, Putin, stand behind Trump, the clever scumbag is safe.
As for Bannon, I am far more generous in judging his actions and intentions. Steve is trying to dismantle neoliberal / globalist world order.


Yes, Anon, Steve is trying to dismantle neoliberal globalism. It's what he wants to install in its place that I question.

Few thoughts Mound.
I do not see now, nor foresee, any viable opposition to the neoliberal globalist world order from the left which had crippled itself by embracing the fringe lunatics' policies.
Those neoliberal and globalist scumbags are demonizing Bannon as they see him, and his movement, as an existential threat. And those scumbags will not go away from money and power trough without a life and death fight.
Looking at the current state of affairs and the devil I know, I will go with Bannon.