What Would It Really Take? 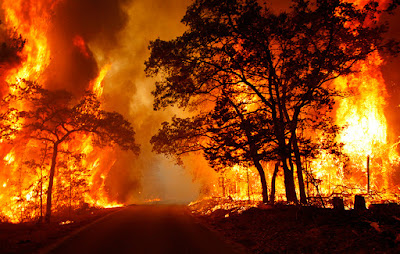 We all know the injunction - cut greenhouse gas emissions by half by 2030 and entirely by 2050.

To some that conjures up visions of the end of fossil fuels, a switch to alternative green energy, electric cars instead of gas guzzlers, baseboard heaters instead of oil or gas furnaces, simple stuff like that.  Easy-peasy.

Only it's not so simple. It would require wholesale change to our economies, what we produce, how we trade. There would be a focus on curbing inequality, not just within national societies but on a global scale.

The UN official in charge of this September's climate summit in New York, recently hinted at what's in store if we're to avoid runaway climate change.

We have to rethink the global economic model. That's a reference to neoliberal globalism. What would a drastic rethink of hyper-capitalism look like? How do our leaders sit down and formulate neoliberalism's successor?

de Alba rejects any "gradual increase of ambitions." That sounds to me like a warning that we have to find better, more sustainable goals than the pursuit of perpetual exponential growth in GDP that has been the hallmark of the postwar era.

We seem to have reached a point where theories of classical economics, already slammed by some as a "mental illness," crash into the concrete wall of environmental reality. It was bound to happen. Infinite growth is not compatible with a finite ecosystem and Earth is sublimely finite.

Think of this Earth as the source of almost all our resources (other than solar energy) which is very much what it is. Earth provides all our soils that sustain life and support modern agriculture. Pretty much everything we do from basic hygiene to our morning coffee to industrial manufacturing requires clean water, enormous volumes of clean water. Again, that is provided by Earth.  Minerals that we use for fossil fuels, metals and other products - that's also Earth. The atmosphere, that's Earth.

Earth, then, is life. It is wildlife and it is human life. Yet it's finite. There's only so much Earth and, because Earth is finite, the planet's carrying capacity, its ability to support life is limited.  It can go only so far and no further. It is our host and we are obliged to respect our host's boundaries, its limits, or we will pay dearly for abusing the environment. And that is where we are today.

We have grown too large for our host. This manifests in several ways. Climate change is one - but only one - of them.

Earth is regenerative. It has cycles. Two of the most critical are the carbon cycle and the hydrologic or water cycle. Here's a depiction of the Carbon Cycle - 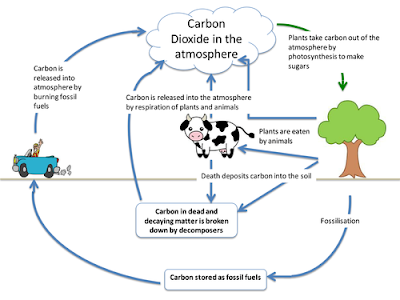 And here's the hydrologic or Water Cycle - 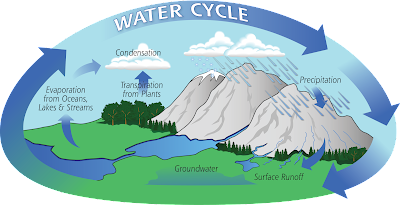 Humans have messed up both cycles. We have skewed the carbon cycle by digging up once safely sequestered fossil fuels that, when burned, have significantly increased atmospheric carbon loading causing changes including global warming, the capture and retention of additional solar energy.

Both of these now significantly modified cycles are not only caused by man-made activities but have a powerful effect on how the Earth, our host, responds to us. They degrade the Earth's environmental carrying capacity, the very essence of life. It's wildly beyond counter-intuitive for us to imagine that we can continue our pursuit of perpetual exponential growth, increasing our perpetual exponential burden on Earth in the process.

We're running amok. We've grown like a malignancy. The recent UN report on biodiversity loss and extinction is an indictment of the neoliberal obsession with unrestrained endless growth. A million species are in serious risk of extinction, among them many "keystone" species whose loss will have knock-on effects on other species.  In forty years, the rough lifespan of neoliberalism, we have depleted the numbers of both terrestrial and marine life by more than half through direct predation or habitat loss.

When you follow these worrisome developments long enough, the manner and depth of their interconnection is inescapable. There are no "stand alone" existential threats even if we do prefer to treat them as such.  Climate change and biodiversity are linked and, together, they produce knock-on effects in other areas that can demonstrate both the robustness and the fragility of our natural world and its systems.

And so I hope that I have at least imperfectly explained how, when we're debating greenhouse gas emissions or biodiversity loss or a new economic model for the Anthropocene, all of these things are related. Common threads run through them all. When you step far enough back and look on these threats one thing emerges from them all - humans urgently need to find ways to live in harmony with Earth's ecology. We have to live within the safety bounds of our environment and we're way past that today. If we can't or won't get back inside, we're done.

Growth for the sake of growth is the ideology of the cancer cell. Edward Abbey

Somebody please tell me how the modern economy is not a pyramid scheme.


Adam Smith, in his 1776 classic, "The Wealth of Nations," envisioned exponential growth, the duration of prosperity in an established nation, at 200 years which he considered "as long as the course of human prosperity usually endures."