Do You Think We're Not in the Grip of Nihilists? 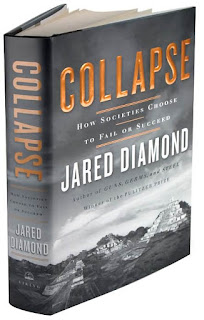 In his book, "Collapse, How Societies Choose to Fail or Succeed," anthropologist Jared Diamond explores how societies past have repeatedly made absolutely rational, short-term choices that carried nihilistic consequences in the longer term. Societies have done things for their short-term benefit knowing full well that they would devastate future generations. Failure is often a choice.

We are one of those societies.

Among the crises we're facing - runaway climate change, overpopulation, rapid exhaustion of the planet's finite resources - is the Mother of them all, Earth's sixth mass extinction.

Now you might think that the prospect of mass extinction, in which complex life forms such as humans and other mammals are directly in the crosshairs, would trigger an appropriate response from our corporate and political leadership. If you did think that, you would be wrong.

Maybe you’ve read King Lear and remember this famous line: “‘Tis the time’s plague when madmen lead the blind.” The words were written more than 400 years ago as a comment on the deadly consequences of greed, delusion and political folly, but they could serve just as well as a Republican party slogan today. They’re a fitting description of the Republican party’s delusional campaign to deny the environmental crises that threaten our planet and our civilization.

For decades now, Republican politicians and their patrons in the fossil fuel industry have used thinktanks, front groups and public relations operatives to promote faulty science and perpetuate the myth that the climate crisis is a hoax. This campaign of climate deception, which is elegantly documented in books like Merchants of Doubt, has exacted a huge toll on the planet and its people – it has sabotaged domestic and international efforts to combat greenhouse gas pollution and exacerbated a crisis that is acidifying oceans, melting polar ice caps, supercharging storms and making the Earth less hospitable to human and animal life. We have a name for the purveyors of this deceitful campaign: we call them “climate deniers”.

At least in the US the Republicans are open about it. They openly ridicule the prospect of mass extinction in Congress. Ain't gonna happen, that's an end of it, move on. Here in Canada we're more discrete. We prefer not to mention it at all, not after we've just grossly overpaid for a crazy pipeline with an election looming. Best if we just ignore it and hope no one notices.
Posted by The Mound of Sound at 8:48 AM