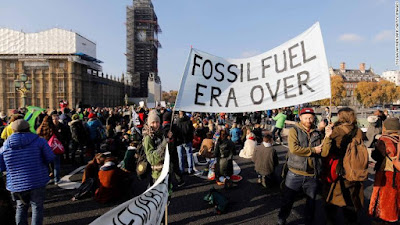 Lawmakers in the UK Parliament have declared "an environment and climate emergency," making it the first country in the world to do so, according to the opposition Labour Party.

The motion was called by Labour Party leader Jeremy Corbyn.

WE DID IT! Thanks to pressure from the Labour Party, the UK just became the first country to declare an environment and #climateemergency. Now it's time for real action to tackle climate change. Share this. pic.twitter.com/hOheWxQQHf—


I realize I've flogged this story pretty relentlessly lately but I only did that because it's so important for life on Earth, all life on Earth.

What we need to do now, here in Canada, is turn on the petro-pimps, the fossil fuelers and their political handmaidens and tell them they have no place in Canada's future. They won't switch their allegiance back to the people of Canada and our future until they fear us again. As Jeremy Corbyn put it this morning, "we have no time to waste."

And what did we accomplish on the climate emergency front today? Why, it was Bill Morneau boasting about how our fracked gas/LNG venture shows that Canada can still deliver on big, carbon-energy projects. And then Justin went groveling to Jason Kenney.


Ottawa is vowing to exempt certain non-mining projects that use steam to extract crude from deep under the earth — known as in-situ projects — as long as Alberta Premier Jason Kenney maintains a hard cap on emissions from his province's oil sector.

Is that a prime minister you can respect?

p.s. yes, I know, Scotland and Wales previously declared a climate change state of emergency.
Posted by The Mound of Sound at 1:35 PM

If exporting LNG is seen as such a good thing, why do we pay a carbon tax on natural gas for home heating etc in BC?