What Are We To Make of Justin Trudeau? 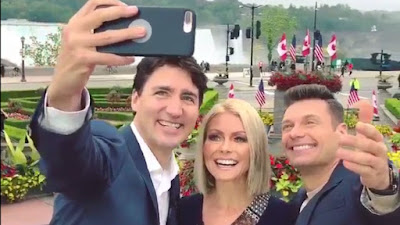 I don't believe either of them. He is flawed. He is not to be trusted. He'll break his promises without breaking a sweat. Not everyone can lie so effortlessly. That doesn't mean he's the worst person ever. That doesn't quite reach the level of corrupt. He could be corrupt but I've yet to see the proof of it.

I don't think he's a good prime minister, not even close. Leaders of other governments - Scotland, Wales, the United Kingdom - have declared a state of emergency over climate change. It's not like there's any shortage of evidence that this emergency does exist or that it's extremely dire and in urgent need of action. Only we're not declaring an emergency or taking any emergency measures to deal with it.

When it comes to the drivers of climate change - greenhouse gas emissions - we're still slackers. Canada with our very modest population still stands in the top ten nations for overall GHG emissions and we're in the top three for per capita emissions. That puts a powerful onus on us to implement extraordinary measures to curb our emissions. This time we are not the good guys.

The UN's IPCC has given us the prescription. The nations of the world must cut GHG emissions by 50 per cent by 2030.  Major emitters that we are, we're not even acknowledging that injunction. Our emissions are actually going up, especially now that we've found the bitumen barons to be grossly underestimating their emissions. 50 X 2030 - that's for losers, not Canada, but we will throw in a little carbon tax for appearances.

There's a looming existential threat, a major force in what some warn will be a sixth mass extinction, and we're thumbing our nose at it. Tell me, what kind of leader does that? Full points if you said "ours."

So whether he's corrupt or not isn't that important to me. He's not much of a leader. The guy who's gunning for his job will plainly be worse but when you're talking about unaddressed existential threats the distinction between them narrows quite a bit.

It's no excuse to claim that answering the call is not politically feasible. That doesn't matter. When the threat is existential you're obliged to try. If you fail and lose that doesn't matter. You must try and then hand the reins to the next guy from him or her to try. Eventually one of you will succeed and whether that requires five or even ten leaders to fall that's not important, not compared to what's at stake.

One thing I do realize is that I don't want to see either the Liberals or the Conservatives take another "false majority." They can't be trusted with the power of majority government. Both sides believe that winning the support of slightly less than two voters out of five gives them a magical mandate to do whatever in hell they choose but a false majority is a false democracy. I don't want someone incapable of getting even close to a majority of the electorate thinking they have the right to make fundamental changes to our country. That's oppressive. It's anti-democratic. And, when that almost two out of five victory is gained on the back of a litany of false promises never fulfilled, it's that much worse. You're not governing with the informed consent of the public. You're governing with the misled consent of a minority of the public.

The petro lobby is alive and well within the Liberal and Conservative parties. That's why they won't declare a state of emergency. It's why they balk at even attempting to cut our emissions by half by 2030. That's how they betray our nation, our people, and our future generations.

I don't know if Justin has obstructed justice. I don't know if he's corrupt. I know he's not as decent as his more ardent supporters claim, not remotely.

This October I hope for a weak minority government with the Greens winning enough seats that they can force the next government to respond to this incredibly dangerous threat. Whether that's Justin or some new Liberal face or Andrew Scheer, we can't afford to give them much slack.
Posted by The Mound of Sound at 12:02 PM

Trudeau can best be described as immature.
Born of privilege he has lived a sheltered life.
He is Canadian born Royalty who acts as royals do in treating others as inferior because of his position.

You are hitting your stride Mound. Keep it up and don't relent. This is perhaps the most important election of our time. I thought the last one was meant to be monumental and just in time but we had a slight hiccup with the greatest lie in my political experience. Environmentalists and all those who have been paying attention over the last twenty years as we witnessed diminishing species from Monarch Butterflies to Whiporwills can't afford to let up. Vote Green with a clear conscience. Pass it on!

Mound, I always think that from the standpoint of those who pulled the strings Ronald Reagan was the perfect President. Having been an actor he could follow a script, glad-hand any room and be extremely personable. Almost everyone liked him, even forgave him, no matter how stupid his decisions.

Trudeau is of a similar mold. An ex drama, teacher he is playing the biggest role of his life. A lot of people really like the guy. The trouble is that most of us expect more than an amicable personality in our leaders. Lately, Trudeau seems to be a bit puzzled that so many of us expected him to actually do what he said he would when campaigning.

"This October I hope for a weak minority government with the Greens winning enough seats that they can force the next government to respond to this incredibly dangerous threat."

Anyone who actively seeks that level of power is by definition human scum. The best "leaders" are the reluctant leaders--those chosen because their ability to see their people through a great crisis is obvious. Even if such an individual were to actually emerge today, the oligarchs would ensure that their media toadies crushed them utterly.

I agree, Mound. A minority where the Greens hold the balance of power is the best we can hope for.

We can only hope!


Yes, but we can hope and perhaps even get involved to improve the Green Party's chances.

When did you figure that out, the third grade? That idea is about as deep as the shallow end of the kiddie pool. Positions of power attract scumbags, but seeking power doesn't necessarily make you a scumbag. And i don't respect those who are capable leaders but don't seek to lead. Theyare pathetic cowards. The world needs all the capable people it can get. Step forward if you have the ability and seize the day. Inaction is almost always worse than a wrong action.