For Insurers, Canada Is a Risky Proposition 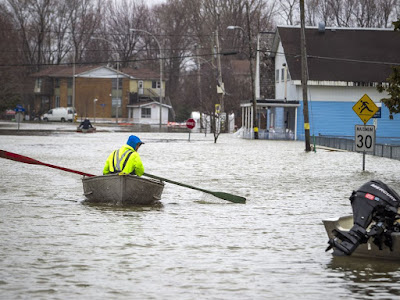 Too bad we didn't spend that 4.5 billion dollars on flood abatement instead of a useless pipeline.

Canada is becoming a riskier place to insure, added Craig Stewart of the Insurance Board of Canada, the industry's national association.

"Insurance prices are affected by the cost of reinsurance and reinsurers have publicly stated that they do not think Canada is ready for climate change or has taken the cost of it seriously enough," he said.

Aging infrastructure is certainly a factor, but so too is under-built or inadequate infrastructure systems designed to deal with runoff, Stewart said. From the industry's perspective, both issues are the result of a "lack of preparedness" in Canada.

"It is part of the reason why Canada is a risky place to insure and why insurers have been tentative about entering the overland (flooding) insurance market," he said. "Particularly in urban areas, it is difficult to predict, based on the state of the ... stormwater infrastructure, what is going to flood and what isn't."


I spoke with a friend earlier this week who was complaining about a sharp uptick in her condo insurance.

For the record, I think insurance is one of the more fair-priced products. The industry is ultimately actuarial. It must balance profits with its ability to sell policies. A lost policy only makes sense if it is no longer actuarially viable.

We've seen this in the States where private insurers bailed out of hurricane/flood risk years ago. The payouts meant they had to charge unbearable premiums. So what did the Congress do? It set up a government insurance system through FEMA that supplied far below cost coverage to homeowners in the Republican-centric southern states.