The Politics of Conspiracy Theorists 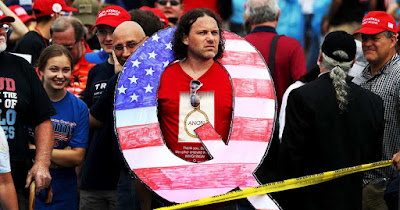 Who knew? Populists have a ravenous appetite for conspiracy theories. You can feed those bastards just about anything and they'll thrive on it. And people like Donald Trump would be just another laughingstock without them.

Populists across the world are significantly more likely to believe in conspiracy theories about vaccinations, global warming and the 9/11 terrorist attacks, according to a landmark global survey shared exclusively with the Guardian.

The YouGov-Cambridge Globalism Project sheds new light on a section of the world population that appears to have limited faith in scientific experts and representative democracy.

Analysis of the survey found the clearest tendency among people with strongly held populist attitudes was a belief in conspiracy theories that were contradicted by science or factual evidence.

The research may go some way towards understanding the success of rightwing populists such as Donald Trump and Jair Bolsonaro, who have fuelled conspiracy theories, undermined efforts to address global warmingand dismissed fact-based journalism as “fake news”.

The survey findings may also prove useful to public health officials who are battling to contain outbreaks of measles around the world amid alarming rates of unvaccinated children.

Yep, they really are the tinfoil hat brigade and we let'em vote. Who thought it didn't matter if you could distinguish reality from dark fears?


In the YouGov survey, people with strongly held populist views were on average almost twice as likely to believe that supposed harmful effects of vaccines were being deliberately hidden from the public. They were similarly more likely to believe that the US government knowingly helped the 9/11 terrorist attackers, and that manmade global warming was a hoax.

Two in five populists in the survey agreed that regardless of who was officially in charge of governments, “there is a single group of people who secretly control events and rule the world together”, compared with just under a quarter of the overall survey respondents.

The reason for that is there are so many people who believe this trash.

And, the religious factions are responsible for that drivel.