They Wouldn't Have It Any Other Way 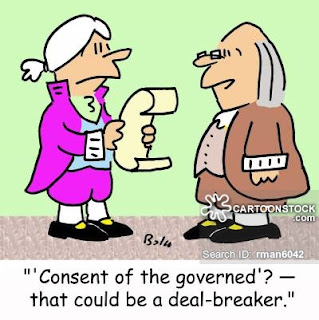 Despite all the Liberal whining, don't blame yourself if Justin Trudeau is unseated by Andrew Scheer in October.

First thing. Don't panic. Remember 2015. The NDP were charging ahead. Harper was barely hanging on. The Liberals were firmly in third place. When the votes were counted it was a Liberal majority, the CPC was Official Opposition and the former front-runner, the Mulcair New Dems, were back in their historic spot of, well, you know...  Things can change in just the course of an election campaign.

However the second thing is that, if we wind up with a Tory government and you haven't voted for Trudeau to stop it, don't blame yourself. Blame Trudeau. It's his fault.

It's hard to remember all the empty campaign promises that Trudeau made in 2015 but they played an instrumental role in his storybook, come-from-behind triumph.  Of all of them, the one that stands out in my mind was Trudeau's pledge that 2015 would be our last First-Past-the-Post election.

There would be no more false majority governments of the sort we endured under Stephen Harper and then bequeathed again to Trudeau's Liberals. No longer would our country be ruled - not governed, ruled - on the strength of a vote representing less than two out of five eligible voters. No longer would three out of five be, for practical purposes, disenfranchised.

You need to realize that a democracy is governed, not ruled. What's the difference. A democratic government is elected with the "informed consent" of the citizenry. It's that informed consent by which a party can claim a legitimate mandate to govern.

Two out of five. That's government without the consent, informed or otherwise, of three out of five of the electorate. Without that essential consent, there is no mandate and all the winner can do is rule, not govern.

You see when a party has a false majority and the power to rule without the popular mandate to govern your consitutional integrity is in peril to an unprincipled ruler pretending he/she has a mandate to put his/her stamp (or boot on the neck of) the country, to transform it to his/her liking, to cast it in his/her image.

Then what happens when a government comes to power on a false majority and quickly reneges on the very promises that secured it the support of almost two out of five voters? Where is the mandate there? When you have a false majority and then betray your promises you've conned the public and undermined the tenuous legitimacy of your government.

It's a bit easier to bear when it's a pleasant-looking fellow with a milquetoast manner but, as a country, as a democracy, you've still been had.

Then, if you've proven yourself a liar, untrustworthy, do you not think that some of the people who voted for you last time might just want to vote for some other guy next time? Haven't you given them good reason to do just that?

When you put it all together, this Liberal prime minister, Mr. Trudeau, has left open the door for his rival, Andrew Scheer. That's on him, not you. With his bevy of broken promises, he's given you plenty of just reasons not to vote for him unless you're a spear-carrying member of the Liberal tribe. (Sorry, I meant "card-carrying member." It's that Lord of the Flies thing.)

One, two, three terms in office - a decade or more - and then it's the next guy's turn. A generation passes, then two and they've still got us in that same old boat, safely down in the bilges. Nothing changes. Power doesn't trickle down to the voter. You can't steer the ship from the bilges. Your vote has no voice except for that fleeting moment every four years after which it's someone else's voice that is heard.

The best you can do this October is to vote your conscience. Don't let these weasels guilt you into anything. The outcome, even if it's Scheer, is not your fault. You're being held by a system designed to fail you. They wouldn't have it any other way.

I would give 101%.
Scrapping of FPTP could finally make Canada a democracy, eh.

Succinct and disappointedly so.
100% agree.