Is This the Set-Up for War? 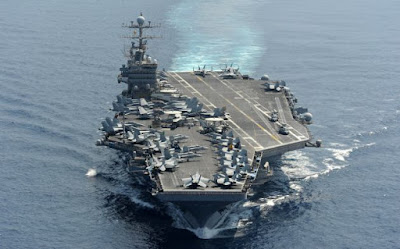 The timing couldn't be more obvious, not with a US navy carrier task force bearing down on the Persian Gulf and Trump spoiling to kick a little Iranian butt.

Four commercial vessels have been targeted by "sabotage operations" near territorial waters of the United Arab Emirates, its foreign ministry says.

The sabotage attempt occurred in the Gulf of Oman, the statement said, but the ministry gave no details of what form it took.

There were no injuries or deaths.

Tensions are high in the area - a crucial oil and natural gas corridor. In recent days the US has sent additional warships there.

The UAE foreign ministry called the attempted sabotage a "dangerous development" and called upon the international community to "prevent such actions" in future.


The incident comes as the United States has warned ships that "Iran or its proxies" could be targeting maritime traffic in the region, and as the US deploys an aircraft carrier and B-52 bombers to the Gulf to counter alleged threats from Tehran.

The US navy's Bahrain-based Fifth Fleet said it was aware of the report but referred queries to UAE authorities.

America has a dodgy history of interfering in the Middle East including manufacturing a convenient 'casus belli' out of thin air. But, hey, with a team like Donald Trump, John Bolton and Mike Pompeo gunning for Tehran what are the chances they would do it again?

Apparently Iran is a bit nervous. I wonder if this map showing US military installations in Iran's neighbourhood might have something to do with that? 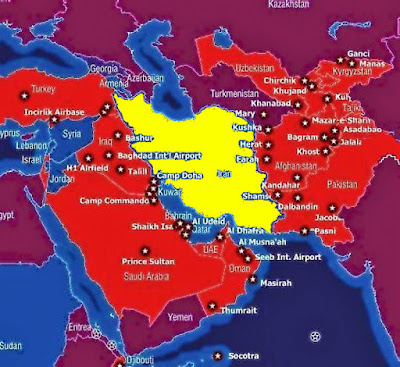 It's American where a war almost always guarantees a sitting President a second term.

Imperialism at its best.
No wonder Putin calls for a multi-polar world order, and Xi Jinping challenges the status quo.

A bit more on the matter here..

Nary a dissenting word by the USA media , the same can be said of Venezuela.

The guillables cannot resist a chance to wave a flag and use the latest weapons.
One day it's going to become more awkward for the USA to achieve its goals.
I doubt it's 'allies' will even approve of this pending debacle.
Will Iran sit back and take 'surgical strikes?
Iran could possibly close the straits of Hormuz , then what??

There has been speculation about what US false flag operation might occur that would turn the almighty Christian evangelical wrath of the USA on Iran, reducing the place to rubble. It's highly unlikely that Iran would start anything - they're not stupid. So the US in typical bully fashion has sent that naval task force to parade up and down Iran's borders to provoke reaction. It's not unlike their 800 or more military bases that ring mostly Russia and China, the restoration of nukes on their borders or nearby like South Korea and a general attitude of provocation daring those godless fools to come out and face democracy and Christian freedom-loving Yankees.


The reaction to US bullying in Europe has been to attempt to set up new financial systems so that all monetary transactions don't have to pass through New York, where they get turned down if deemed un-American. So all big European companies cannot deal with Iran even if their governments want to, and all have finally backed off. Also their subsidiaries in the US could face charges if they try to break the US sanctions. Venezuela is in the same boat as Iran as countries facing US sanctions directly like Russia.


The US has nearly everyone by the short and curlies. Pence, Pompeo and Trump have warned Germany not to buy natural gas from the almost completed Nord Stream II gas pipeline from Russia, instead of the Ukraine route where the locals siphon some off for free and have for decades. At least the route across Syria from the Gulf to Turkey has been stymied, and Turkey is pissed off with the US as well anyway.


Faced with reaction to their mafia-style rule-the-world for US business philosophy, the US hasn't much time before alternative payment systems happen where Iran and Venezuela or anyone else can export oil for something other than US dollars. That's the impetus, loss of total world financial and hence policy control, not Pompeo's speeches citing the Rapture to dumbfuck evangelicals on a mind trip. So of course, all US media and the Democrats are on board for a spot of blackmail and graft. Trudeau has been recently flitting around trying to shore up support for the CIA/State boy dictator cum president Guaido, like the good little US lickspittle he is, and Canada officially hates Iran too.


Trump wants a war, any war, so dipshit Yankees will vote him in for a second term, so something will give. And the Democrats will all wave their hands in approval too, being good little neocons. The environment? What yah talking about? That Northwest Passage belongs to the USA!


The latest reports about Bolton relying on Israeli intelligence and the Saudis claiming their flagged tankers were attacked, seemingly without any significant damage and zero casualties only reinforces my view that this has all the makings of another American setup.

I return to the farewell visit Sir Richard Dearlove, then head of MI6, received from Bandar bin Sultan, a.k.a. "Bandar Bush." Prince Bandar surprised Dearlove by stating that Iran's day of reckoning was near and the Sunni world would put paid to the Shiites.

Bandar was livid that the Americans refused to invade Syria to topple Assad and install a Sunni government in his place. He spoke of raising, training and equipping a private army that many believe became ISIS.

The Saudis have been spoiling for a Sunni-Shiite war for the heart of Islam, Israel has sided with Riyadh and so too has Washington since the Iraq adventure backfired and made Tehran the dominant power in that region.

What else could it be??