The Real Skinny On Joe and Hunter Biden


Donald Trump and Rudy Giuliani can't stand witch hunts except when it's their own doing.

At the moment they've been caught pressuring the Ukrainians to dish up dirt on Hunter Biden, the former vice president's son. Trump claims that the then vice-president traveled to Ukraine to help cover his son's involvement with a corrupt gas company and its sketchy oligarch. In other words it is Joe Biden, not Donald Trump, who is corrupt.

Enter James Risen, a former investigative reporter from the Washington bureau of The New York Times who broke the story four years ago.  Risen says Trump's spin machine has turned the story on its head.

IN DECEMBER 2015, I was an investigative reporter in the Washington bureau of the Times. That month, I published a story reporting that Vice President Joe Biden had just traveled to Ukraine, in part to send a message to the Ukrainian government that it needed to crack down on corruption.

But I also wrote that his anti-corruption message might be undermined by the association of his son Hunter with one of Ukraine’s largest natural gas companies, Burisma Holdings, and with its owner, Mykola Zlochevsky. Zlochevsky had been Ukraine’s ecology minister under former Ukrainian President Viktor Yanukovych, a pro-Russian leader who had been forced into exile in Russia.

...When Joe Biden arrived in Ukraine in December 2015 to press for more aggressive anti-corruption efforts by the government, Hunter Biden’s role with Burisma made his father’s demands, however well-intentioned, appear politically awkward and hypocritical.


IN FACT, HUNTER BIDEN has been the black sheep of the Biden family for years. He was the younger son who could never live up to the example set by his older brother, Beau, an Iraq war veteran and the attorney general of Delaware who died of brain cancer in 2015, cutting short a promising political career.

In 2014, Hunter Biden was discharged from the Navy Reserve after testing positive for cocaine use. He had also been involved in a hedge fund with his uncle, James Biden, Joe Biden’s brother, that went bad in the face of lawsuits involving the Bidens and a business partner.

Hunter Biden was the family millstone around Joe Biden’s neck, the kind of chronic problem relative that plagues many political families. George H.W. Bush had his son Neil; Jimmy Carter had his brother Billy.

Still, when Joe Biden went to Ukraine, he was not trying to protect his son — quite the reverse.

The then-vice president issued his demands for greater anti-corruption measures by the Ukrainian government despite the possibility that those demands would actually increase – not lessen — the chances that Hunter Biden and Burisma would face legal trouble in Ukraine.

...But somebody obviously read my piece, as well as others like it, because questions about the Bidens in Ukraine suddenly came roaring back this year. Giuliani, Trump, and their lackeys began spreading the false accusation that Biden had traveled to Ukraine to blackmail the government and force officials to fire the country’s chief prosecutor, Viktor Shokin, to derail an investigation into Burisma.

In May, when this issue began to surface, The Intercept’s Robert Mackey wrote an excellent piece debunking the lies in the new pro-Trump version of the Biden story. In the process, he provided greater detail than I had included in my 2015 story. He wrote that Shokin had been forced from office at Biden’s urging because he had failed to thoroughly investigate corruption and stifled efforts to expose embezzlement and misconduct by public officials. Biden did threaten to withhold $1 billion in U.S. loan guarantees unless Shokin was ousted. But that was because Shokin had blocked serious anti-corruption investigations, not because he was investigating Burisma. 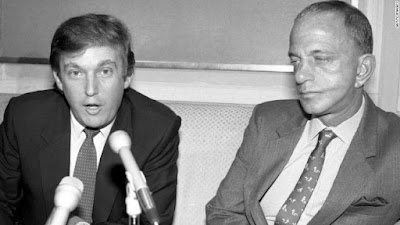 In other words, it's the degenerate Roy Cohn, Trump's mentor and moral compass, surfacing again. It's where Trump goes to when he needs to find his inner ugly. And the Gullibillies, they eat it up.

Biden did threaten to withhold $1 billion in U.S. loan guarantees unless Shokin was ousted. But that was because Shokin had blocked serious anti-corruption investigations, not because he was investigating Burisma.
——- if the Burisma investigation continued under the new guy, then i’ll Believe this statement, otherwise it’s just another rationalization of those pesky ´unintended consequences’ of policies and actions enacted by the rich and powerful that ALWAYS seem to redound to their benefit, if not outright profit.

I'm afraid the need for some sustained reading about this situation will preclude any of Trump's supporters from absorbing these facts, Mound. They, like their man, seem to prefer the bifurcated and immensely shorter Twitterverse for their 'facts.'

Investigations of Zlochevsky ( and therefore Burisma ) continued after Shokin was gone.

In Britain, Zlochevsky funds were frozen by a money laundering probe. The investigation found nothing incriminating, ended and the funds were returned.

Investigations continued with a new prosecutor in the Ukraine and were eventually abandoned .


"Biden should indeed be investigated in both Ukraine and in the United States."

The confused, failing state to our south has much bigger problems than the exerable symptom know as tRump:

"Trump’s Ukraine Ask was Criminal; but it Was SCOTUS’ Citizens United that Invited Foreign Interference in US Elections"

"Citizens United, by bestowing political personhood on corporations, opened US elections to foreign money in several ways, they point out."

Thanks rumley; that info settles the question for me.
And if Lorne was referencing my initial comment above, I just want to say that I was simply expressing some basic skepticism about a statement of motivation, which by its nature needs context to be judged. The bifurcated thinking most in evidence these days is ´trump is bad’ so anyone opposing trump is good, and while I feel that reflex myself, it’s usually correct to realize that they’re all bad. Less boorish maybe, less clownish, but still bad.

Informal poll: do you personally know anyone who makes $50,000 a month (or anywhere in the ballpark) for being on a corporate advisory board? Every time they say on NPR "there's no evidence of corruption" I feel like I must be a Martian.

Anon 7:23. I wasn't referencing your comment. I was actually thinking about Trump's tweet in which he makes reference to this whole thing as being BULLSHIT (his caps, not mine) If you see some of the comments that follow, the Trump loyalists praise the Lord for having Trump to save them and their fellow Americans:

Joe Biden's demand that the prosecutor investigating the same company his son worked for be fired seems like a legitimate reason to investigate Joe Biden. Joe doesn't have anything to worry about. I'm sure that he is innocent. Right?