Another Sanctimonious Rightwinger Explodes in Flames 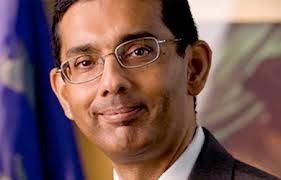 You might have seen him on Real Time with Bill Maher or the Colbert Report.   He's Dinesh D'souza, radical rightwing pundit, president of an Evangelical college and the guy behind the film 2016:  Obama's America.

He's a weasly sort of sanctimonious, holier than thou little prick and now, true to form for his sort of Republican, he's been caught putting that prick where it doesn't belong.

If you look back over recent decades, you will find this creature surfacing in any number of conservative crusades. Stirring up jingoistic anti-Obama fantasies , for example. Or protecting traditional marriage from gays.

Which is why it has been amusing to hear D'Souza, the president of an evangelical college, explaining just how he came to be sharing a hotel room with a woman who is not his wife and introducing her as his fiancée. Apparently D’Souza was in the process of ending his marriage of twenty years, but had not quite gotten around to signing the divorce papers when he shacked up with his lady friend at a South Carolina conference. He has since “suspended” his engagement.

The right wing conservative parties seem to thrive on lies and misdemeanors.

I guess in his world God is flexible on the adultery question. Weird, though. I thought he was a good Catholic.

So is this the model for the weaselly character that sweats his way through the sports on "22 minutes?" Or is it just me...?

@ BY. I see them a bit differently, more sado-machichistic.

@6E Of course the Church is flexible to its congregation, almost as much as it is to its clergy.

Of course. Silly me, thinking there was a single standard.

It's not so much what the Church thinks of it that irks me, it's what (Dinesh thinks that) God thinks of it. Yet another outspoken evangelist who isn't really enamoured with their own creed?

If someone is Catholic they don't commit adultery???

What can be said about this man Dinesh? A piece of slag maybe?