A New Phenomenon "Climate Departure" Arriving All Too Soon.

One of these jarring blows is just a few years away. The name they've given it is "climate departure." It refers to a transition that will be sweeping the world beginning around 2020 in the tropics and spreading into the northernmost regions by 2047.

I read about this today over at Lorne's blog, Politics and Its Discontents. He mentioned a new study that sounded eerily like something I read in a research paper two or three years ago. I followed the links back to the summary of the latest study and, sure enough, it mentioned that there had been several papers that came to the same conclusions. Damn.

...climates without modern precedents could cause large and potentially serious impacts on ecological and social systems1–5. For instance, species whose persistence is shaped by the climate can respond by shifting their geographical ranges4–7, remaining in place and adapting 5,8, or becoming extinct 8–11. Shifts in species distributions and abundances can increase the risk of extinction 12, alter community structure3 and disrupt ecological interactions and the functioning of ecosystems. Changing climates could also affect the following: human welfare, through changes in the supply of food13 and water14,15; human health 16, through wider spread of infectious vector-borne diseases, through heat stress 19 and through mental illness 20; the economy, through changes in goods and services 21,22; and national security as a result of population shifts, heightened competition for natural resources, violent conflict and geopolitical instability 23. Although most ecological and social systems have the ability to adapt to a changing climate, the magnitude of disruption in both ecosystems and societies will be strongly determined by the time frames in which the climate will reach unprecedented states1,2. Although several studies have documented the areas on Earth where unprecedented climates is likely to occur in response to ongoing greenhouse gas emissions 24,25, our understanding of climate change still lacks a precise indication of the time at which the climate of a given location will shift wholly outside the range of historical precedents.

Does that sound apocalyptic? Well it kind of does, doesn't it? Most ecological and social systems can adapt to a changing climate, provided it's gradual and over many centuries. That sort of benign change is not what's expected from Climate Departure.

The first in line to receive a Climate Departure working over are the tropics. The earlier report singled out a few areas that could be hit by 2020, among them the Caribbean nations.

What begins in 2020 will move through the tropics and then spread poleward, arriving in the Arctic around 2047. Here's a map of the tropical zone. 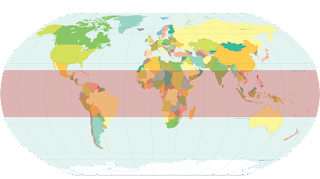 What the chart shows is most of Africa, the greater part of South America, a big chunk of India and Southeast Asia are in the crosshairs for early impact climate departure. What's also notable is how little territory/refuge remains in the Southern Hemisphere. The main refuge is to the north into China, Russia, Europe and North America. North Africa and the Middle East are desert, that won't help.

So, if climate departure does kick off in 2020 as these reports suggest, we've only got a few years to figure out what we're going to do when the migrants come knocking. These certainly are interesting times. Wish they weren't.

Mound, some years ago I read a cheap definition of the Third World. It's that pink band on your map.

I suppose that's true, Toby. Most of the underdeveloped/overexploited states are in the tropics.

2020 your such an optomist, we are in the suck now

.. I've maintained for quite a while.. that when enviro and/or disaster induced migration happens.. Canada's Pacific Coast will be swamped.. Immigration Law? Right.. Coastal patrol? Right.. No it will be whatever boat or ship or raft that can exit Asia, India etc.. will arrive.. and won't be in the hundreds.. it will be forever.. Drought, Starvation, War, Radiation, Flood... We won't be stamping passports folks.. this will be far beyond regulation.. instead far into neccessity..

Its so great we've had 10 years of Harper evangels talking out of their fat asses.. and carping about our wondrous Israeli friends.. and Saudi allies.. & pimping resource extraction to support China's economy.. Gee thanks for the memories Mr Harper Inc.. ya f'n insolent disgrace jackass.. asleep at the wheel or what ya pumpkin head 'economist' bullshit artist .. !

Christ, Steve, did you have to call me an optimist?

@ Sal - Sitting here on the island your scenario comes across a bit grim. If it came to a mass outpouring of refugee/migrants from Asia I expect the US Navy would seal off the coasts of North America realizing that migrants entering Canada would imperil their northern land border. They couldn't reach the BC coast and head north. They wouldn't survive. The only infrastructure that exists that could possibly support them in any numbers would be across the border into the States from where they could try to spread out. At least that's what I would expect might unfold.

New to some perhaps.
James Lovelock predicted exactly this years ago as part of the Gaia Theory.

I'm most worried about migrants to our immediate south. they have lots of guns, and the gumption to use them.