I know, I Know - It Sounds Ridiculous. Still...


There are two much different ways to look at severe weather events. One is to take the small view and look at the event either as a local or national issue. The other is to go for the big picture and look at what's happening with that type of event globally.

Looking at the Fort Mac fire as a Fort McMurray or Athabasca region issue allows a guy like prime minister Slick to say "there have always been fires." Right. Looking at the devastating wildfires sweeping the world invites you to wonder if there's not something more to this than Slick wants to talk about.

Right now drought is a major issue in many regions of the planet. It's become a multi-year critical threat in the arc stretching from Bangladesh through to Vietnam. It seems our prairie provinces will be in for it again this summer. The coast too, apparently.

When you have leadership like we have in Slick, they can and often do the funniest things. There's a lot of unrest building in India over drought and water shortages. The Monsoon isn't due for another month but it hasn't been punctual or reliable lately and it's unclear whether parts of India will be able to hang on until precipitation returns. Seriously, they're talking about no water - not just for crops, not just for livestock but for people. If you're out of water it doesn't make a damn bit of difference if rains are coming in six weeks or two months. Might as well be two years.

I came across a report out of India that a member of parliament from the BJP is recommending that the Indian people organize yagyas for rain. Took a bit of digging to find out what a yagya is. Now I know. It's this: 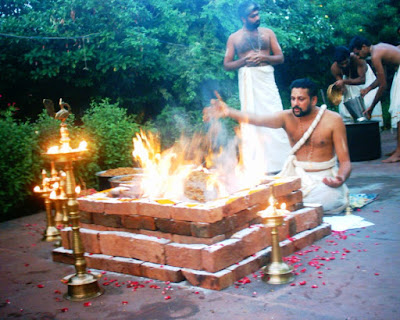 A yagya is a Hindu ritual involving fire and sacrifice to invoke some blessing, in this case rain. Those crazy buggers, eh?

Well they're no crazier than Georgia governor, Sonny Perdue. In November, 2007, Sonny organized an official state prayer vigil for Divine intervention in the form of rain. It was a bust. In 2011 it was then Texas governor, Rick Perry's turn. Perry decided to up the ante. He didn't settle for a one or two hour prayer vigil. Perry declared a 3-day official Days of Prayer for Rain in the State of Texas. That too was a bust and it's hard to imagine yagyas doing much better.

But I guess when you've exhausted all rational options, why not pray for rain? 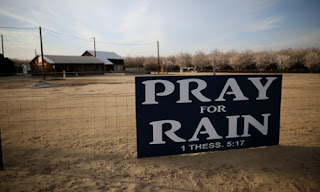 Anyong said....wait until this happens. "San Andreas fault is about to crack - upi.com" It is a shame some of us are pessimists isn't it? Was told this morning...negativity gets people no where...that is all people can say about Climate Change. Here's a reality as well..."we have wasted water for years and continue to do so". Regarding Australia; why doesn't that government put money out to implement the use desalination for farming and forestry?


Negativity should not be confused with genuine, legitimate discontent although the two often travel together.

Discontent, disaffection are what often fuels the discontent essential for achieving change.