What Year Do You Think This Is? Chris Hedges Figures It's "1984" 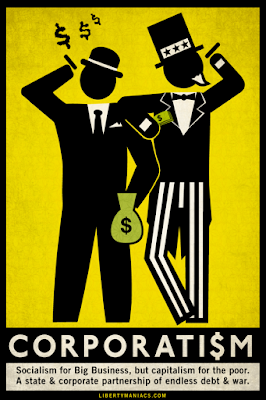 Donald Trump may be a tribute to the timelessness of George Orwell. Chris Hedges warns that chaos is just a step or two away.

The artifice of corporate totalitarianism has been exposed. The citizens, disgusted by the lies and manipulation, have turned on the political establishment. But the game is not over. Corporate power has within its arsenal potent forms of control. It will use them. As the pretense of democracy is unmasked, the naked fist of state repression takes its place. America is about—unless we act quickly—to get ugly.

“Our political system is decaying,” said Ralph Nader when I reached him by phone in Washington, D.C. “It’s on the way to gangrene. It’s reaching a critical mass of citizen revolt.”

Did you think the militarization of America's police departments was some unintentional blunder? Was it sheer coincidence that it arrived at the same time America's venerable posse comitatus rule was gutted? Caesar, my children, has crossed the Rubicon. Hail Caesar.

This moment in American history is what Antonio Gramsci called the “interregnum”—the period when a discredited regime is collapsing but a new one has yet to take its place. There is no guarantee that what comes next will be better. But this space, which will close soon, offers citizens the final chance to embrace a new vision and a new direction.

Nader points out that the notion of a democratic franchise has become a dark farce with a bought and paid for Congress and presidents pre-selected by a handful of America's ultra rich.

“Elections have become off-limits to democracy,” he went on. “They have become off-limits to democracy’s fundamental civil community or civil society. When that happens, the very roots shrivel and dry up. Politics is now a sideshow. Politics does not bother corporate power. Whoever wins, they win. Both parties represent Wall Street over Main Street. Wall Street is embedded in the federal government.”

While Nader supports the building of third parties, he cautions that these parties—he singles out the Green Party and the Libertarian Party—will go nowhere without mass mobilization to pressure the centers of power. He called on the left to reach out to the right in a joint campaign to dismantle the corporate state. Sanders could play a large role in this mobilization, Nader said, because “he is in the eye of the mass media. He is building this rumble from the people.”

Yes. I recently called for a broad based progressive restoration, uniting citizens from the entire political spectrum, left to right, as the only viable avenue to ridding this country of the scourge of neoliberalism and restoring genuine, progressive democracy to Canada. Nader is absolutely right.

As for America's prospects should Clinton win the White House, Nader is blunt:

“We will get more quagmires abroad, more blowback, more slaughter around the world and more training of fighters against us who will be more skilled to bring their fight here,” he said of a Clinton presidency. “Budgets will be more screwed against civilian necessities. There will be more Wall Street speculation. She will be a handmaiden of the corporatists and the military industrial complex. There comes a time, in any society, where the rubber band snaps, where society can’t take it anymore.”

Hedges has always understood what was going on in the "deep state," Mound. Ditto for Nader. The question is, who's paying attention?

I'll echo Owen's concern. Lots of people are making fun of Trump, but few people I know in real life go beyond the jokes to the reality of the current situation. It takes a whole semester for my students to get their heads around the corruption of the people and institutions that they thought were there to take care of them. Few adults want to talk about it or read any books I suggest. I've had conversations with neighbours that actually giggle at my concerns with political collusion. 'Of course the government has our best interests in mind. That's their job!"

We seem to be entering the narrows now where all manner of challenging hazards await us in the currents - political, economic, environmental and more, each hazard compounding the other and making it more difficult to steer a safe course.

Hedges believes his country is in a volatile, pre-revolutionary moment that he calls this "interregnum." There is something seismic building but which of these minor shakes will be the trigger for the Big One?

Much as Trump is worrisome, the accelerating pace of global warming over the past year is far worse. Trump can be dealt with, restrained, unless he finds some way to suspend the Constitution. He may be the instrument of revolt. What a spectacle it would be if America's traditional allies used on Washington the same tactic of containment they've used since the early post-war years on other threats to their stability.

That's the thing when you're entering these dangerous, uncharted waters. The possibilities seem endless.