A Step Back for the West Coast. 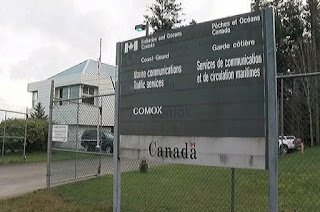 One step forward, another step back.

Just as I heaped praise on the federal government for re-opening the Kitsilano Coast Guard station in Vancouver, it's time to dock a few points for the closure of the Coast Guard radio facility in Comox on Vancouver Island.

That leaves us with two radio facilities for the Pacific coast - Prince Rupert up in the north and Victoria in the south. Kitsilano in vote-rich Vancouver provides ready response and rescue to the south coast.

What's so important about Comox? For starters that Coast Guard station was adjacent to Canadian Forces Base Comox, the only military airfield in British Columbia which, by default, makes it the province's search and rescue centre. That's where the Cormorant helicopters and the Buffalo and Orion search aircraft are based. That's where the searches are organized and co-ordinated. Think of it as the epicentre of British Columbia's rescue operations.

Vancouver and Victoria are pretty close so there'll be a fair bit of overlap in coverage. Then there's a long stretch of empty ocean before you reach Rupert on the north coast. That gap used to be filled by Comox. Not any more.

But coast guard workers say running two communication stations is not enough to ensure the waters are safe.

"At times there will be one person covering the entire coast for safety which we feel is quite unsafe," said Scott Hodge, vice president of the coast guard union, Unifor 2182.

...But mariners have reported frequent outages and problems with the quality of the coast guard radio signal on the West Coast.

Hodge recalls one time when the signal was intermittent for hours.

"The entire west coast of the Island was unmonitored for about 14 hours — they were having interrupted communications there," said Hodge.

"This sort of thing has happened quite a bit. And we're worried this could happen in Victoria."

More worrisome yet is that prime minister Slick seems to have become increasingly amenable to the idea of an armada of dilbit-laden supertankers plying the waters of the BC coast. Hell of a time to lose radio coms.

The Federal Liberals phoned me today, fishing fo what I loved best about the new government. So I told them, specifically, about the Comox comms centre, Site C, Northern Gateway and Kinder Morgan. I told them about poverty and climate change and pipelines. I declined to donate.

Amen to that, Kim. Well done.