There Goes the Neighbourhood. Chalk Another One Up for Fascism. And, Yes, It Has Nukes. 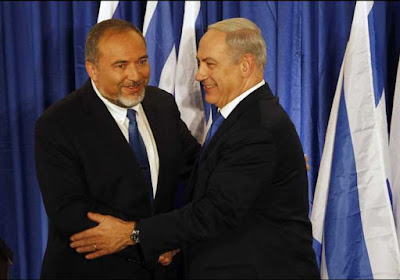 Washington is rightly concerned with who else has nuclear weapons.

North Korea is a case in point. The US has to fret that whatever iteration of lunatic Kim runs the place could get a bit twitchy and launch a warhead or two.

Pakistan likewise keeps Pentagon defence planners up at night. Two threats there. One is the outbreak of war between India and Pakistan leading to a nuclear exchange that might quickly spread to adjacent regions and then, who knows? The other is the prospect of Islamist radicals, either terrorists or from within the Pakistani military, commandeering some or all of Pakistan's arsenal.

Now there's a new name they'll be chalking up on their Worry Board, Israel. This follows Benjamin Netanyahu's embrace of  the Israeli ultra-nationalist party, Yisrael Beitenu, and the appointment of Avigdor Lieberman as the country's defence minister. Critics claim the move represents the evolution of Israel into a full blown fascist state, one with its own substantial nuclear arsenal.

Former Israeli prime minister, Ehud Barak, says Netanyahu has planted the seeds of fascism. Netanyahu's former defence minister, Moshe Yaalon, spurned a new portfolio, quitting instead, and warning, "Extremist and dangerous elements have taken over Israel and the Likud and are threatening (society)."

As the Jerusalem Post points out this means that Lieberman, as defence minister, now becomes Czar of the West Bank and occupied Palestine.

So how is this going down with Israel's neighbours, a.k.a. the Arab Muslim world? As you might expect. Egypt's military government, until now one of Israel's few friends in the region, is troubled by Lieberman's appointment and the shift in Israel's government and society.

Making the Egyptians deal with Lieberman is a slap in the face to Cairo, given that he once suggested destroying the Aswan Dam and sweeping the Egyptians into the sea. Knowing that the erratic and extremist Lieberman has his finger on the nuclear button must also be nervous-making for the al-Sisi government. The pan-Arab leftwing London daily, al-Quds al-`Arabi, reported that circles around al-Sisi were “shocked” at the prospect of having to work with Lieberman, and that they consider his appointment a “red line” after he threatened them with genocide.

On his way out the door, Yaalon warned that the extremism, violence and racism that has manifested in Israeli society is now spreading into the military.

The former prime minister, Barak, warned Israelis that there'll be a price to pay. "The outgoing defense minister, Moshe Ya'alon, was the victim of a purge. In the initial months, Liberman will give off the impression that he is moderate. Sooner or later, however, we will see the price we have to pay."

And yet, no matter how dire the situation, no peep of criticism or censure will escape the lips of either Trudeau or Obama, Mound.

I fear you're right, Lorne. I've read rumours, however, that Obama may have a parting gift waiting for Bibi.