How Much Trouble Are the Saudis In? 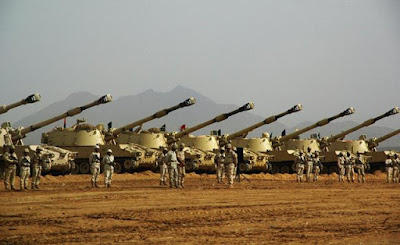 When you think of a place that must be drowning in petro-dollars, surely Saudi Arabia comes to mind.

Saudi Arabia's oil giant, Aramco, is a family business, a closed shop, and remained for most of us an enigma. Saudis + Oil = Unimaginable Wealth.

In recent years, the Saudis have been acting, well, weird. In the past they would throw a bag of money here or there. They funded the mujahadeen resistance during the Russian occupation of Afghanistan. When Saddam's forces invaded Kuwait and drove right up to the Saudi border, the Saudi armed forces even got involved in Desert Storm. Mostly though they've fought their battles with money. Money to help Sunni Islamist fighters wage campaigns in the Middle East. Money to buy peace from Sunni Islamists at home. Let's not forget those 9/11 hijackers, eh.

Lately, though, they've been a little goofier than normal. They've become hyper-sensitive to Iran, their Shiite Muslim rival. Prince Bandar bin Sultan went positively ballistic when Obama refused to commit ground troops to overthrow Assad in Syria. That, by some accounts, seemed to have led to the organization and funding of this new ground force, the Islamic State, ISIS.

Around the same time the Saudis launched a bloody but incompetent air war in Yemen. The Saudi air force was ostensibly fighting in support of the ousted Sunni leader of Yemen by attacking rebel (Shiite) Houthi villages with American-made cluster bombs but that never managed to stop the Houthis who were simultaneously fighting both al Qaeda and ISIS fighters who had taken up residence in Yemen.

Then came the crash in world oil prices as supply flooded the market, creating a glut of cheap oil. It was thought that the Saudi royals were trying to re-assert their dominance by undermining rival producers in Russia, the US (and Canada), while impeding the restoration of Shiite Iran's oil industry.

Now there's a move to privatize at least part of Aramco. It's believed that a 5% share could provide the Saudis with the largest sovereign wealth fund in the world. The Saudis have stated a desire to break their country's addiction to an oil economy.

There's been an element of flailing to all of this, as though the Saudis were desperate to land some knock-out punch at least somewhere. It just made no sense. There was no immediate threat to Saudi security or sovereignty on the horizon so why all the bellicose maneuvering?

One of the lesser known causes of war is what I call the "while we still can" or "before it gets any worse" argument.  One situation is an arms race in which one side is perhaps being overtaken by a rival and can't find a way to stay ahead. It may then decide to attack its ascendant rival while it still can, before it loses its fleeting advantage.

Do the Saudis feel insecure, vulnerable?   Perhaps they should. Moody's this week downgraded the Saudi state's credit rating.
(link is external)
“A combination of lower growth, higher debt levels and smaller domestic and external buffers leave the Kingdom less well positioned to weather future shocks,” Moody’s said in a note.

According to Business Insider(link is external), the Saudis have been burning through their mountain of cash.

The size of the bond was not specified in the report.

The bond isn't the first round of borrowing for Saudi Arabia this year, as the country burns through its cash pile.

In April Saudi Arabia raised a $10 billion ($6.85 billion) bond from JPMorgan, HSBC and Bank of Tokyo-Mitsubishi in the form of a five-year loan, which was over-subscribed.

Saudi Arabia is desperate for cash because it is still heavily dependent on oil to bring in revenue.

No wonder the Saudis are keen to begin liquidating their oil reserves. They're cash strapped. Yet that begs the question of why the Saudis are buying such massive amounts of weaponry unless they intend to put them to good use against, oh I don't know, Iran?

Good question, Mound. If the 28 pages are released, the Saudis won't be able to blackmail their supporters.

The Saudis ought to worry about their future. Contrasting their society with Iran's, which they consider to be their rivals, shows them lagging. While both societies are stultified due to the pernicious presence of political and cultural Islam, Iran has at least built up their educational, scientific and industrial systems, and fosters some societal appreciation for the concept of advancement.

Maybe the Saudis think they can buy their way to advancement. Has this been tried before? It might work, at least a little bit.

(Can Islam be criticized as a culture? Yes. All cultures should come in for criticism, and I think some should be criticized more than others.)


Chris, Steve - I suspect our lifeboat is going to get a lot more crowded in the coming decades due to security, economic and environmental causes. The latest research suggests that most of the Arab Muslim world (North Africa and the Middle East) could become uninhabitable due to extreme temperatures. I assume Israel is facing the same challenge.

If you're an Arab leader and you're looking at the future based on fact and science what do you do? This is genuine "edge of the cliff" deliberation. I assume you would want to relocate most of your people to the developed world - if they would have you. Looking at the Syrian refugee response that's a big "if."

I do not want pedip