The Impeachment of Donald J. Trump Or a Caisson-Ride Down Pennsylvania Avenue 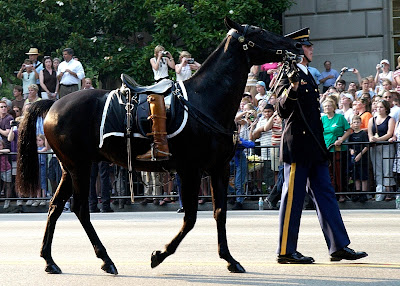 Let's hope he doesn't pick Ted Cruz as his running mate. That said I doubt Trump would want a running mate whose popularity could drag down his own. Trump-Cruz, possibly the worst ticket imaginable.

There's been a lot of speculation about Trump in the Oval Office, most of it focusing on the rise of a fascist state. Some speculate that Trump would go extra-constitutional, dissolve Congress, suspend the Constitution. Me? I don't believe it.

Two things might happen. One involves a state funeral, the other a trial on charges of "high crimes and misdemeanours."

There are many powerful people in the United States, all of whom have taken an oath to defend their country and uphold its Constitution. Many hold their Constitution in near religious reverence and, to them, the state and their constitution are inseparable. Included in this group are America's military commanders and the key personnel in its national security apparatus. The latter group has already proclaimed Trump as a threat to American security and global stability should he become president. I expect that conversation has been echoed behind many closed doors at the Pentagon.

My guess is that some very powerful voices would speak very softly to president-elect Trump laying out some fairly stark options for his presidency. For all his bluster and eccentricity, I don't see much courage in Donald Trump, any willingness to sacrifice for a cause. No, he won't like it but he will do as he's told once he realizes what's at stake.

I'm sure there are Trumpians in the armed forces. How many is anybody's guess but if there's a threshold number things could get pretty interesting if passions run high enough.

Election day itself could get pretty interesting too in some locations.

Uncharted territory for sure.

I agree with your last point but for a different reason. I think that Drumpf's bluster is all he has, and that at some level he knows this. There were statements by a former campaign co-chair awhile ago saying that Drumpf really hadn't expected things to go as far as they have with his campaign, that he'd never really been in it seriously from the start, but that now to save face and for the sake of ego he's kept running. I'm in no ways sure of that, but I do think that Drumpf may, at some point, realize that he is way out of his depth when it comes to the presidency. Hell, all you have to do is hand him the China file alone and it'd have his head spinning. That's while I think he'd end up designating the shit out of everything with a huge cabinet of lackeys, party warhorses, and a few who really know the score. sort of a Cheney/Bush presidency with more flash and ten times the incompetence.

Drumpf may very well find himself President in name only; there for show while the somewhat psychotic adults run things...into the ground...


Dana, the monster people are conjuring up in a president Trump would be something in the nature of Mussolini or a distant vestigial of Caesar. They all had one essential element, a praetorian guard, a powerful military unit loyal to the dictator alone.

Mussolini had the Cheka. Hitler the Leibstandarte SS. Saddam the Republican Guard. Franco had the Guardia Mora, recruited from the Moors of North Africa. Gaddafi, of course, had the Amazonian Guard who, at least initially, were pretty hot.

Trump would have to stage a successful constitutional coup first and, even then, I think somebody would top him.

Jesus, Neil, you could be right.

ABH campaign worked in Canada and, let's hope, that it will work in USA...
A..non

I agree completely. Trump will do as he's told. As soon as they sit him down and explain who is really in charge and why , he'll fold.He'll be confronted with what real power is.

It is great to have the opportunity to read a good quality article with useful information on topics that plenty are interested on.